The Mount of Olives© 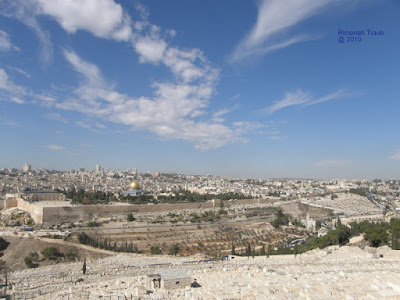 Jews for thousands of year have prayed and dreamt of beholding Yerushola'yim from Har HaZaitim. Today in His Goodness, HaSh-m gave us the zechus to stand on the ridge under the Intercontinental Hotel and feast our eyes on the Har HaBeit. Because today all our hearts are encrusted in stone, our group of Bais Yaakov teachers did not faint or at the very least burst into loud wailing on viewing the Temple Mount  in its desolation. Some consolation came from the fact we were there to learn about the the  placement of where our Holy Temple had stood and where it will stand in the future. Although the opinions are very  many and very varied, our learned tour guide Rav Barnea Levi Selavan did an excellent  job in clarifying the matter for us.
The largest Jewish cemetery in the world is located on Har HaZaisim, the . It extends for 250 Dunams east of the , and many thousands of the illustrious greats of our nation are buried there. To name only a few, this is the resting place of the prophets Haggai, Zachariah, and Malachi; the commentator of the Mishnah Rav Obadiah Bartanura, Rav Chaim Ben Atar (the Or HaChaim), Rav Shalom Sharabi (the Rashash),  the Rebbes of the Sadigora, Gur, and Nadvorna Chassidic dynasties;the Chief Rabbi Abraham HaCohen Kook; and Moshe Yoel Salomon, one of Jerusalem's builders at the close of the nineteenth century and the founder of Petah Tikva; There are also myriad's of simple (no Jew is simple) Jewish men and women buried in the different sections of the cemetery.
In April of 1949, the Armistice Agreement with explicitly stated that there would Jewish access and continued burial on the . This agreement was never honored. The destruction of the cemetery continued throughout all of the 19 years that the Jordanians ruled .
In the process of destroying tombstones and graves, the bones of skeletons were strewn about.  In the Jordanian Army camp in Azariya, east of , tombstones were used as paving stones for roads. They were also used as flooring for latrines, as well as in the construction of a telephone booth.
Both the newer and ancient graves were destroyed, some of them thousands of years old. The Intercontinental Hotel, a gas station, and other buildings were erected on top of the graveyard. Israel's attempt  to focus global attention and alert international institutions to the destruction that was being perpetrated had no ear. Even the 1954 Israeli protested to the United Nations had no effect. After Har HaZaitsim was liberated in1967, Israeli forces counted about 38,000 damaged or smashed tombstones.
Ever since the 1967 reunification, burials have once again taken place on Har HaZaitsim. Large sections of the cemetery have been restored, but the Palestinians continue the attempts to damage and desecrate the cemetery.. Also, while escorting their dead for burial, Jewish mourners have been attacked, as well as those who come to visit and daven by the graves.
Paths, observation points, and parking have been built to give visitors an easier access to the . A plaza on the crest of the is named Mitzpe Rehavam after the assassinated Israeli government minister Rehavam Zeevi. It’s believed that this area of the plaza is the approximate location where the parah adumah was sacrificed in times. From there, you have a panoramic view of the ancient cemetery.
The olive leaf the dove brought back to Noach was from trees growing on HarHazaisim which may account for its name. In Mishnayos Rosh HaShannah, Har HaZaisim is called Har HaMishcha, and it’s related that the first of the torches announcing Rosh Chodesh (to inform those in Bavel) were lit there.  (chap 2 Mishna 3 and 4). Here it was waved back and forth, up and down. When those on the next mountain saw the light they too lit a torche. And so on at the following mountain till all the way to the Diaspora and the whole Diaspora was a mass of fire. The second mountain mentioned was Sarteva this is said to be opposite the Yabok River were Yaakov Avinu fought the angle of Esov in this week's parasha, Vayishlach.
Dovid HaMelech davening regularly at a shul on Har HaZaisim, and it was there that he pleaded for HaShem’s help and was immediately answered during the rebellion of his son Avshalom.
In the Haftora of the first day of Sukkas, Zachariah tells about the prominent role that Har HaZatim will play in the Ultimate Redemption The nations of the world will come up in war against Yerushola'yim. On that Awesome Day HaSh-m will stand with his Feet on Har HaZatim. His involvement  will be felt and seen as it was at the time of the splitting of theYam Suff. The Har HaZatim will split into two along its east-west line. HaSh-m will totally route the armies of Gog and Magog.The wicket nations that persecuted our people though out the long years of Galoss will be punished. A great Shofar will sound and all the lost stranded Jewish souls will come from afar. They will bow to HaSh-m upon the Holy Mountain in Yerushola'yim and they will present Him with a Crown of Kingship. So many will return from exile that the boundaries of Yerushola'yim  will expand untill Damascus in order to be able to accommodate all of them. On that Unique Day The Great Light of the Redemption will shine forth on Am Yisroel. "On that Day Hash-m will be One, and His Name will be One."
The Kidron Valley runs along the eastern wall of the Old City of Jerusalem, separating the Temple Mount from the Mount of Olives. During the nighttime hours, the view of Har HaZaisim is one of 's most spectacular attractions with special lighting illuminating the whole mount, including the Tomb of Avshalom and the Tomb of Zecharia.
There are 51 Jewish families  living in today at a location called "Maale Hazeitim," in an area adjacent to  the "Hatzur" section of the Sephardic cemetery on Har HaZaisim. 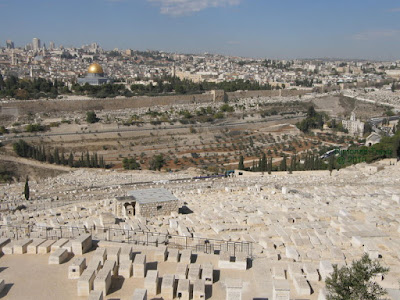 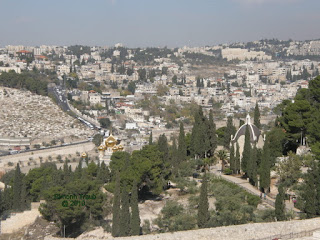 Posted by Eretz Yisroel in the Lens at 2:22 AM