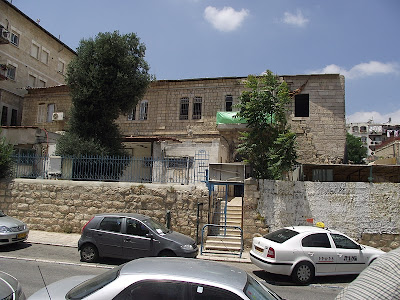 Next to 13 Rechov Ha’ayin Chet is a tree painted in blue. Directly opposite it,at #20 Rechov Ha’ayin Chet. to the left of the “Black Panther Way,” is the historical Chatzer Strauss, which was known as the Beis Hamussar,  The kedushah and purity emanating from this courtyard permeated thevicinity so much, that even the Arabs named the surrounding area Musrara (a play on the word mussar, as heard from Rav Toch).

The Strauss Courtyard (chatzer), which was established in 1896, housed in its time giants of the Mussar
Movement, who were paragons of piety and wisdom— yakirei d’karta Yerushalayim (the precious ones of Jerusalem). Yeshivas Ohr Chadash was founded in the Torah and mussar spirit of Harav Yisrael Salanter, in 1897, on the premises of the chatzer. Harav Yosef Chaim Sonnenfeld, zt”l, who taught there daily, became president of the yeshivah in 1899. 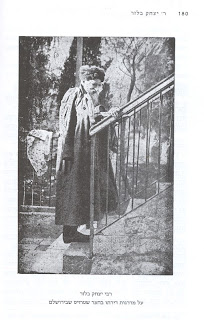 Harav Yitzele Blazer of Petersburg came to Yerushalayim in 1904 and settled in the chatzer, where he founded the Beis Hamussar (Institute for Ethical Study). When Harav Naftali Amsterdam of Kovno arrived two years later, they led the institution jointly. The voice of Torah and tefillah never ceased at Chatzer Strauss. It was known as the spiritual meeting place of the city, where people dedicated themselves to self improvement and refinement of their middos, striving constantly to serve Hashem better and better.

At first, Shmuel Strauss earned just enough to support his family without any worries. He was known to be G-d-fearing and scrupulously honest. Following his marriage, his father-in-law had arranged a permit from
the government for him so he could run a small bank. He did not even have an office; rather, his coat with two
large pockets served as his “office.” Into one pocket he would place account details, and into the other, cash.
One Friday morning he was invited to a bris. He put on his Shabbos coat, transferring all his wads of cash and papers that he’d ordinarily keep in his working coat, to its pockets. After the seudah he went to work as usual.

After work, he went home and took off his coat so he could help with the Shabbos preparations. He went to
Kabbalas Shabbos wearing his Shabbos coat. After Maariv he headed home. As he walked along, he suddenly realized that all his money was in his pocket. He immediately shook out his pocket and left the money and papers in the street. Reb Shmuel understood that his future was in doubt and that he would have to repay many debts. But he had never been so happy in his life. He had withstood the nisayon. Shabbos had prevailed!

After Havdalah, Reb Shmuel decided to check if any of his money had survived. He found everything intact.
No one had touched a thing! Hashem had preserved his possessions.

Reb Shmuel’s star began to rise. A few days later, the Minister of Finance of the Baden region heard about
his trustworthiness and gave him a huge business deal. The Strauss Bank grew, and many well-to-do people
invested their money in it. Reb Shmuel Strauss became extraordinarily wealthy. He built Chatzer Strauss as a
sign of thanksgiving to Hashem for all the good He had done him.

On the fateful Shabbos afternoon of the 1929 massacre in Chevron, British policemen who had received
information that the Arabs intended to slaughter the Jews of the courtyard, came to Chatzer Strauss and
advised the tenants to evacuate. Everyone left, and Chatzer Strauss was empty for a while, till they all returned. In 1936, because of threats of a bloodbath, all the tenants of Chatzer Strauss left, never to return to
live there again.

Today there is a Breslov yeshivah there and a Morrocan shul. The building looks as if it could do with
some sorely needed renovations.

Published in Hamodiah
Posted by Eretz Yisroel in the Lens at 2:23 PM