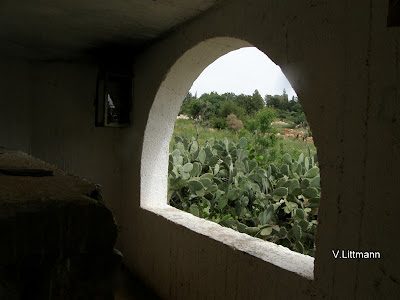 Hundreds of buses bring people to Meron on Lag B’Omer, and they let people off in the fields by the side of Road 886 that belong to Kibbutz Farod. Here the buses park and from here the passengers are taken to Meron by shuttle buses. Not far away, in these same fields, are two stones structures with blue domes near two small streams. These are the tombs of Rebbi Yishmoel and Rebbi Nechemia HaAmsuni. After visiting with Rebbi Shimon on Lag B’Omer, you may want to take the time to visit these tombs since they are located in the vicinity of the buses.

Rebbi Yishmoel was a renowned forth generation tanah, who is referred to as Rebbi Yishmoel without his fathers' name Elisha, in the Talmud. He was a friend and colleague of Rebbi Akivah. Rebbi Yishmoel recorded the thirteen rules by which the Torah is elucidated. These are recited every morning during Shacharis, before one says pesukei d'zimrah.

While still a lad, at the time of the Destruction, he was taken captive to Rome for a life of shame, together with 700 young men. He was rescued by Rebbi Joshua ben Hananiah. (Gittin 58A).

When Rebbi Akiva was Av Beth-Din in Usha, (circa 3877), Rebbi Yishmoel came to the Mesivta deliberations from his home in a border-town of Judah, he is therefore called "the one who comes to Usha" (Bava Basra 28B).

His grandfather was Rabbi Yishmoel ben Elisha who once entered the inner Holy of Holies and was asked by HaShem to bless Him. Rabbi Yishmoel blessed HaShem that His mercy should overrule all His other attributes, and He should behave towards His children with the middah of mercy. (This event is commemorated in a song.) Rav Avigdor Miller,zt"l, says that the fact that even Ha Kadosh Boruch Hu needs to be blessed, shows that everyone in the world needs encouragement and we should strive to be nice to and encourage everyone we interact with.

Rebbi Yishmoel's nephew Domoh once asked his uncle if one who had already studied the entire Torah was permitted to study Greek philosophy. Rebbi Yishmoel quoted the pasuk in Yehoshua (1:8):"The book of this Torah shall not depart from your mouth and you shall study it diligently day and night."  And then he added: "Go and find a time that is neither day nor night. That is when you will be permitted to study Greek philosophy (or anything else that is not within the realm of Torah and studies not required for parnossah)." Based on this Gemara in Menochos (99b), the Chofetz Chayim says that when, as in our times,  the darkness is so intense and Hashem's Presence so obscure, each and every Jew must try to generate more light by studying as much Torah as he can. 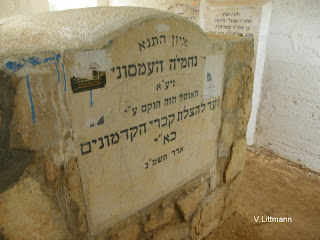 Rebbi Nechemia  HaAmsuni was a fourth generation tanah and a talmid of Rebbi Akivah for twenty-two years. Rebbi Nehamia spent many years explaining homiletically all the places were es (the word showing an object is coming) is found in the Torah. He claimed that all these es'im come to include an additional meaning. When he wanted to explain "es HaShem Elokecha tirah," he saw it did not fit into his theory. He therefore abandoned the whole idea, saying that the same way he received reward for explaining the es'im, now he would get rewarded for leaving-off this line of explanation. Rebbi Akivah then came and explained that the es in "es HaShem Elokecha tirah" is there to include talmidei Chachamim who also need to be feared.

Published in "The English Update" 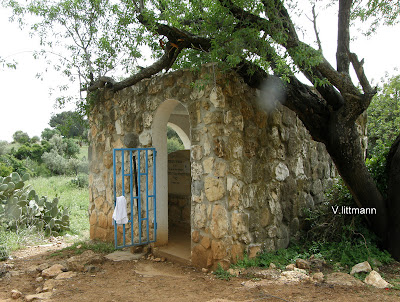 Posted by Eretz Yisroel in the Lens at 9:37 PM

Labels: The Tombs of Rebbi Yishmoel and Rebbi Nechemia HaAmsuni.