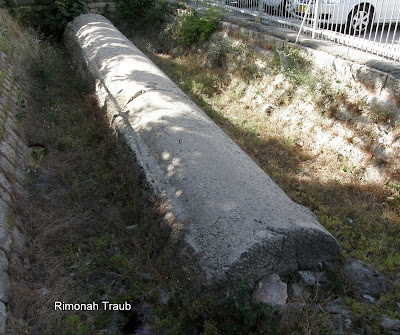 Jerusalem is full of history. One cannot walk more than a few steps without encountering relics of bygone years. When even the simplest of construction work is done in Jerusalem, more times than not the spades hit vestiges dating back to the Second Temple period and much, much further back.

In the latter half of the 19th century, when the Russian Compound was being constructed (in front of today’s main Municipal Police Station, opposite the magistrate’s court), a most impressive remnant of the past was unearthed. This huge stone column is 12 meters (39 feet) long and now lies in a hollow in the ground and
is referred to as the Finger of Og Melech haBashan. Sometimes it is also called Herod’s Pillar.

Most likely, this area was a quarry and the column was being prepared as either a colonnade for the Herodian Temple or — as a number of capitals found here suggest —for a building of the Theodosian period (second half of the 4th century). Apparently, as the column was being sculptured out of the natural rock of the area, it
cracked and was left in place.

Herod was the Roman-appointed king over Judea from 37-4 BCE. He had an ambition to make Jerusalem architecturally magnificent so as to be on a par with cosmopolitan Roman cities all over the empire. Although most of Herod’s beautiful buildings and architecture were destroyed by the ravages of history and time, the damage incurred to the Og pillar while in construction ironically ensured its immorality and the testimony it gives us today.

Herod knew that the Sages of Israel, basing themselves on verses from the holy Torah, would not approve of his kingship. In a rampage, he killed all but a handful. Baba ben Buta, the Gadol Hador, managed to survive. Herod observed how careful Baba ben Buta was to not malign him, leading him to regret his hasty massacre of the Chachamim. He asked Baba ben Buta how he could make amends. Baba ben Buta told him to tear down the Beis Hamikdash and build it anew, saying, “You extinguished the light of the world (by slaying the Sages); go exert yourself for the light of the world” (the Sanctuary).

But Herod had his reservations, fearing that the Roman Caesar, to whom he was subservient, would be angry and punish him. Baba ben Buta advised sending a messenger to Caesar, requesting permission to rebuild the Beis Hamikdash. This messenger would take a year to reach Rome. In Rome he would tarry and take his time, approaching the Caesar only after a year. Then the messenger would take another year to return home, and in the meantime the Beis Hamikdash could be rebuilt. A messenger was sent, and as prophesied, returned three years later — with a clear directive strictly forbidding any structural changes to the Beis Hamikdash. But by that time, Herod had already completed this unique and magnificent Home of Hashem.

Although Herod was an unworthy ruler, Chazal tell us that the Jewish People experienced siyatta diShmaya (Heavenly assistance) during his reign. When the Jews are worthy, rain falls on Tuesday and Friday nights, when people are generally indoors. By the time they wake up in the morning, the wind has blown the excess water away. The sun is shining and people can go about their business, undisturbed by the weather. The Gemara (in Taanis) tells us that all this indeed did occur during the years in which Herod was occupied with restoring the Beis Hamikdash, and the Jewish people knew that their work was acceptable to Heaven.

Truth be told, Herod’s atonement offering of the new Sanctuary edifice was but a ploy to curry favor with the nation. He was far from repentant, as subsequent events demonstrated. For example, near the end of his days, he burnt alive two sages, Yehudah ben Saripheus and Matitiahu ben Margolis and slew a number of their disciples because they removed a golden eagle Herod had set up over a gate in the Sanctuary in contradiction to Torah law.

Am Yisrael, though, tends to remember even the smallest favors done to them. Despite Herod’s enormous wickedness and the great suffering he caused the nation,we always remember the single good instance
of building a more beautiful Bayis that he bestowed upon the Jewish People (even though it was funded from the Jews’ pockets, and not his own personal funds). The new building was known as the “Beis Hamikdash of Herod.” Chazal say “He who did not see the Beis Hamikdash erected by Herod has never seen a beautiful building in his life.”
Published in Hamodia 28 July 2011.
Posted by Eretz Yisroel in the Lens at 5:25 PM