Many guide books claim that the best time to visit the Gilboa is in the late winter when the majestic Iris Yaynei (Iris HaGilboa), a purple iris, blooms and covers the mountain. But anyone who has seen the splendorous beauty of the place will agree that a visit to the Gilboa is worthwhile any time of the year.

Each season here has its own charm in this stunning, tranquil area. The mountain’s normally mild winter days offer the clearest panoramas, yet in the summer the cool breeze in the place provides a break from the intense heat.

The Gilboa mountain range lies in the north of Eretz Yisrael, reaching  () above sea level at its highest. Although not high in terms of mountains, it is in a region surrounded largely by valleys and lowlands — which provides a strong contrast — making the area so glorious.

is part of the lower Galilee’s eastern gateway between the Jezre’el Valley (’s breadbasket) and the . Some very pivotal episodes in our history occurred around this area.

In sefer Shoftim (ch. 7) we are told that Gideon set up camp at Ein Charod, which is identified by many as a spring at the foot of . The army of Midian was camped beyond the hill opposite the , called Givat Hamoreh. This hill was so called because it was used by people as a moreh et haderech, a “signpost” to gauge directions.

After Shaul and his three sons, Yonason, Avinadav and Malkishua (see Shmuel I, 31) were slain on  , Dovid Hamelech cursed  as it had been the site of such catastrophic events. Since Shaul’s slaughter of the kohanim of Nov was one of the reasons for his tragic death, Dovid wanted to make certain that the area of the Gilboa, where Shaul was killed, would not give produce again. The trumah of fields is given to kohanim. Dovid wanted to ensure that kohanim would not come to the Gilboa in quest of their deserved gift-offerings and thereby re-arouse the accusation against Shaul. Even today, despite all the planting done by the Keren Kayemet l’Yisrael of thousands of trees, there are noticeable bald spots on these hills, and one summit remains entirely bare.

When visiting the Gilboa, bring your Tanach along and read Dovid’s beautiful, poetic lament; here in the place where the incident actually occurred, it is especially meaningful.

Make a right turn at the “Taanachim” Sargel Juntion onto Road 675. Pass Jezre’el Junction and then make your next right onto the “” (Road 667), studded with magnificent views in all directions. On your right is  , with the mountains of Shomron () just beyond. On the Shomron slopes, the Palestinian city of  can be seen clearly.

Continuing down the road, on your left you will come to a turn-off for “,” also known as “Katef Shaul” (Saul’s Shoulder). There is a wonderful place for a picnic and a playground in the forest. 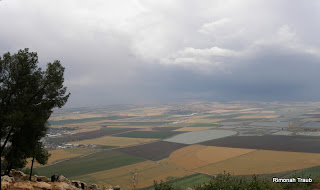 Further down, at end of this road is a parking lot. The circular trail (marked green) on Katef Shaul, to an overlook of the Jezre’el Valley, is an easy one and well worth taking, as the view is simply spectacular. Through a break in the pine foliage on this 500-meter-high ridge, you will see a “window” that opens onto a vista affording a view of Biblical events.

It is said that from this spot Shaul Hamelech gazed out at the Philistine army camped at Givat Hamoreh, the day before he was killed. Ein Dor, the home of the Baalat Ov he visited, can be viewed across the valley nestling in the hills. 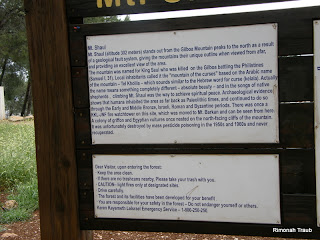 In the adjacent valley is the Spring of Charod where Gideon was housed before routing the Midianites. Tel Yizre’el (Jezre’el Mound), the home of Achav and Izevel (Jezebel) in the ancient , is also observed.

At Tel Yizre’el the vineyard of the Navot Hayisraeli was reconstructed with an impressive orchard of native Israeli trees (see Melachim I:21).
Beit She’an, where Shaul’s body was hung after the battle on Gilboa, is also seen. Beyond, to the east, the tip of  can be seen. This is the place where the heavenly bodies fought Sisra on behalf of Devorah Hanevi’ah and Barak. The mountains of the   can be observed, and on a clear day, you might even glimpse  to the north. Known as the , this part of the Jezre’el valley is full of sparkling fishponds and colorful fields that attract great numbers and varieties of birds, including pelicans, cormorants, storks, seagulls and ducks.

Most of what is today a scenic road is what used to be known as  prior to 1948. Every spring, usually in Adar, people flock to the  to see the Gilboa iris in its lush violet colors. This flower (Iris Haynei) that was first described in 1876 is well-known in , and its distribution is restricted to the Gilboa and northern . It is a protected flower, and its area of growth now is a nature reserve. The gorgeous purplish blooms are so striking that they have become the logo of the Society for the Protection of Nature in .
Posted by Eretz Yisroel in the Lens at 4:54 PM