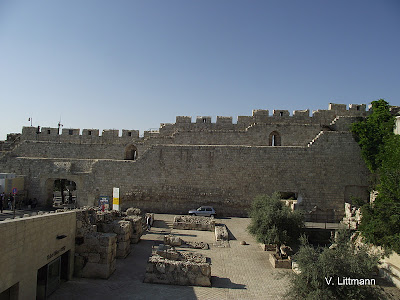 Shaar Ha’ashpot (Dung Gate) is located on the southeastern side of the Old City, southwest of Har Habayis. It faces south in the direction of the Kidron Valley and Shilo’ach Pool and is close to the Gichon spring. This is the gate used most often to get to the Kosel, for directly behind the gate lies the entrance to the Western Wall compound. 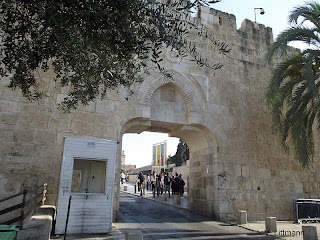 Although the present gate was built by Sultan Suleiman the Magnificent in around 1540 C.E., it can be traced back to Biblical times. When the Beis Hamikdash was in existence, 80 million sacrifices were slaughtered there every year. The enormous amount of ash from the korbanos was taken out of the city through the Dung Gate and disposed of in the Kidron Valley below.

In sefer Nechemiah this gate is mentioned a number of times. Among other things, it is told how Malkiyah the son of Reichav, officer of the district of Beit Hakerem, reinforced Dung Gate, by rebuilding and positioning its doors, bolts and bars (Nechemiah 3:13-14).

The walls of Yerushalayim were destroyed and rebuilt several times. There was a Biblical Dung Gate, but it is up for speculation whether the ancient gate was at the location of today’s structure. 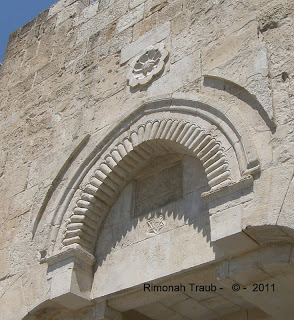 The gate is called Shaar Ha’ashpot, according to one theory, because for many years after the destruction of the Second Temple, non-Jews used to bring all their garbage (ashpot) through this gate to deposit on the Kosel. For hundreds of years, the Western Wall was hidden under all this refuse. The situation was remedied when Omer al-Khattab (638 C.E.) mixed bags of golden coins amidst the piles of rubbish, and those wanting the coins cleaned up the place.

Others say the gate is named for the quivers for arrows (ashpot) that were stored in the nearby arsenal.

This gate has the lowest archway of all the gates and is distinguished by two top rounded triangular shapes
carved into its stonework, and topped by an engraved flower. 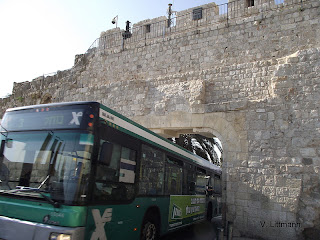 The 1948 Armistice Agreement between Israel and Jordan placed Dung Gate under Jordanian control. In 1952 the Jordanians enlarged the gate in order to accommodate passage of motor vehicles. After the miraculous Six Day War of 1967, Jews regained access to the Kosel after 19 years of not being able to go there. An architect, Shlomo Aronson, was commissioned to renovate the gate.

Shaar Ha’ashpot is also referred to as the Gate of Silwan, as the Arab village of Silwan is across the valley from it. Its third name — Mugrabi Gate, or Bab al-Magharibeh in Arabic — refers to the Moroccan Arab Quarter (Mugrabi Quarter) that was near the gate and runs along the Western Wall of the Temple Mount. Others say that its name derives from the Moorish immigrants who lived in eastern Yerushalayim during the 16th century. They have not resided in the city for centuries, but the name remains. 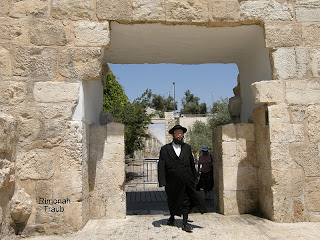 A little to the left of Shaar Ha’ashpot as one enters the walls of Suleiman the Magnificent’s gate is a small entrance way called Tanners Gate, orShaar Ha’burskai in Hebrew. It was named this because of its proximity to an industrial area for local tanneries when the gate was built.

It is actually an old medieval gate, probably from Crusader times, whose archaeological remains were discovered during excavations in the 1980s. As there was so much traffic entering and exiting Dung Gate, the Jerusalem Municipality decided to restore this gate for the benefit of visitors. It leads to the bus stop outside the wall that serves Kosel visitors. 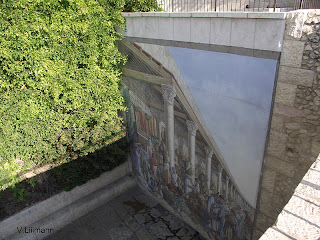 As you go into the Old City through Shaar Ha’burskai you will find yourself in the eastern Cardo. The stone floor under the wooden bridge one stands on when entering this gate consists of original Roman Cardo slabs. Visitors are greeted by an enormous wall mural of what is imagined the Cardo must have looked like. The Davidson Center is to one’s right.

Published in Hamodia
Posted by Eretz Yisroel in the Lens at 3:06 PM