In 1881, 60-year-old Rav Moshe Wittenberg, a Chabad chassid, arrived in Eretz Yisrael from Vitebst (Wietebsk) in . As he was childless, he wanted a “shem v’zecher.” Consequently, he invested his huge fortune in building housing for the destitute of Yerushalayim, within and outside the walls. He hoped the verse in Yeshayahu (56:5) would be fulfilled in him: “I shall give them My house, and within My walls a memorial better then sons and daughters.”

To achieve this goal, at first, he decided to buy a courtyard near the Damascus Gate, close to the
, and started to negotiate with the Christian-Arab owner. At that point, the Latin Catholic convent bypassed him and bought the courtyard. It took him two exhausting years of intensive lobbying and bribery to acquire the property. Using his connections, Reb Moshe negotiated with the Latin Patriarch directly, but since the latter spoke only French, he needed an interpreter to assist him. Eliezer Ben Yehudah filled this role. 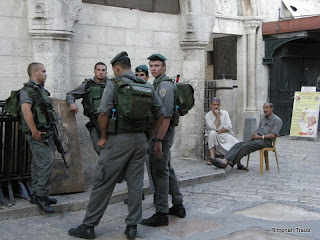 The courtyard was eventually redeemed for the estimated sum of half a million rubbles (an enormous amount in those days), in addition to huge “bakshish” (bribe/gift) of a thousand napoleons. Reb Moshen established a shul called “Tefillah l’Moshe” in the complex — Beit Wittenberg. The complex contained approximately 20 apartments, that were later populated by Chabad chassidim who made aliyah. It is claimed that the famous Mediterranean Hotel, in which Mark Twain stayed when he visited the city in 1867, was in this courtyard.

Today a huge Israeli flag drapes from the windows of Beit Wittenberg that runs south of the Via
Dolorosa (as one walks from the Kosel plaza toward Shaar Shechem/Damascus Gate). In the 1980s (almost exactly 100 years after its original purchase), Ariel Sharon bought the building.  took up legal residence in it, although it was never his primary residence. It is now one of the most famous of the Ateret Kohanim-owned properties 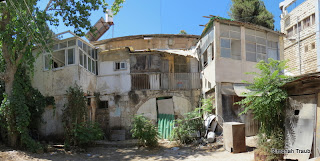 It is quite unbelievable that not far from the hustle and bustle of Kikar Hashabbos lies a quiet, pastoral neighborhood, which will transport you about 120 years back in history. Located behind the Zupnick building on Rechov Strauss, the neighbourhood of Batei Wittenberg will surprise you with its calm quaintness.

In 1885/6, Reb Moshe also built Batei Wittenberg (Shaarei Moshe) comprising 50 houses near Meah She’arim. Being that he was a Chabad chassid, the nusach of the shul in his new neighborhood was according to Chabad.

During World War I the residents left the area and the shul was bolted up for a year. Then Avigdor Ender came and broke into the shul, whereupon davening started there again, this time in nusach Ashkenaz, the nusach which is used there until today.

There were two clocks in the shul. One, known as the Arabisher zeiger (Arab clock), was set to the time of Eretz Yisrael, moving each day according to shekiah. The other kept time as we do today. In addition, a matzah was kept in the shul as eiruvei chatzeiros for Shabbos.

There was a large communal oven to which all the residents would bring their cholent before Shabbos. The oven was then sealed, and on Shabbos morning, the owner would come and break the seal so the pots could be retrieved.

The homes in the neighborhood are built in an oblong square, around what once was a stone-paved courtyard that covered a huge cistern. At each end of the paving, a waterhole accessed the cistern (sealed today). The women washed and dried their clothing outside. Downspouts, from the gutters on the side of the roofs of the dwellings, used to reach underground and directed the rainwater to the cistern. On each rooftop there was a black barrel to collect the rainwater, which was later used with a filter on Pesach. Some of these barrels can still be seen today. 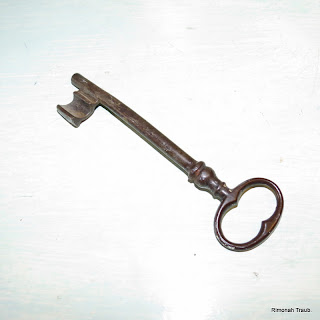 As with the tents in the midbar, none of the entrances of the homes faces each other. The houses each had two rooms and the walls are very thick, keeping out the winter cold and the summer heat. The keys of the inner doors are extremely large and heavy. The doors can be barred from the inside with a large crowbar that is attached to a nearby wall.

The large, arched windows are set back in a large cavern-like area. During the War of Independence, when Batei Wittenberg was near the border, the wide area in front of the windows was blocked off with mattresses, for safety. Until today, one can still see bullet and mortar holes in a yellow back wall of a nearby building, on Rechov Strauss, facing the Zupnick courtyard.

In front of some homes were tiled-roof balconies. Every year the tiles were removed in order to make a sukkah, and were later replaced. The inhabitants of the homes paid an initial lump sum (shlissel gelt — key money) and now pay a minimal monthly rent. In his will, Rav Moshe Wittenberg required that all revenue acquired from Batei Wittenberg be distributed among different yeshivos and chessed/tzedakah organizations and funds. Administrators were appointed to see that all was done according to the last testimony of Rav Moshe Wittenberg.

In 1886, Rav Moshe Wittenberg and Rav Nissan Beck bought the area of Maaleh Har Hazeisim, adjacent to today’s so-called “Ras el-Amud.“ They transferred the land to the Chabad and Wohlin Kollelim, who planned to build a cemetery there. Between 1886 and 1948, as the legal owners of the land, the kollelim paid the property taxes on it. During this period, as the Turks did not permit the Jews to bury their dead there, the kollelim leased the land to Arab farmers for the purpose of growing wheat for the production of matzah.

During the Jordanian occupation of eastern , all Jewish property, including this one, was transferred to the “Jordanian Custodian of Enemy Property Office.” In 1951 an Arab leaseholder had the Jordanian Land Registration Office transfer the land to his name. A meticulous Jordanian clerk discovered the land really belonged to Jewish owners and applied to
the  to invalidate the false registration by the dishonest Arab.

Following the Six Day War, with much of the area already densely built up by Arabs, the two kollel communities pursued the case in Israeli courts. In 1984, the High Court ruled in favour of the true Jewish owners, validating their claim. In 1990 the kollelim sold their land to Dr. Irving Moskowitz, who planned to build a 132-home Jewish neighborhood on this land, which is his privately-owned property.

But these plans, in September of 1997, provoked an international outcry. Despite American pressure to halt all construction, the area slowly developed. In 2009 Egged launched a bus route from Maaleh Hazeisim to Silwan and the Kosel. A hundred families were living Maale Hazeisim by 2011.

Rav Moshe Wittenberg also built a compound of homes in the Musrara neighborhood  In addition, he was on the committee that Dr. Wallach formed in 1894, whose goal was to build Shaare Zedek hospital.

Reb Moshe Wittenberg passed away on 18 Nissan of 1899, and is buried in the  in Yerushalayim.

Posted by Eretz Yisroel in the Lens at 4:54 PM