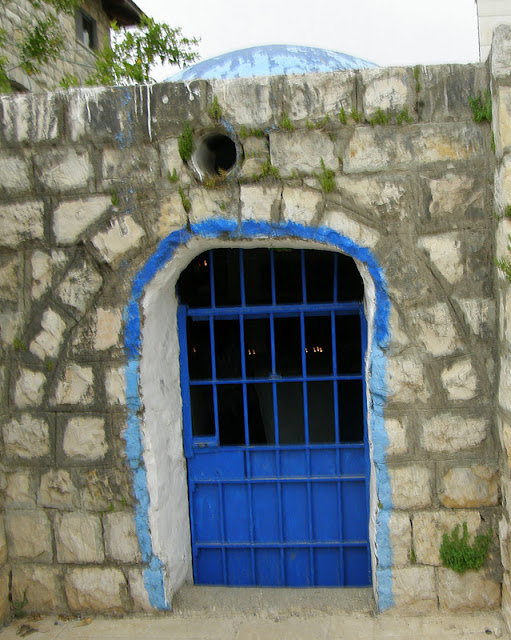 A Bloc of Milk
Gush Chalav nestles on the northeastern slopes of , thirteen kilometers north of Safed. Jewish settlement dates back at least 3000 years. The village is mentioned in the Mishneh as "Gush Chalava,” a city surrounded by walls since the time of Joshua Ben Nun.

The name "a bloc (social or political term which denotes a group of people which operate cooperatively somehow in a common interest.  Hence also a region of settlement )of milk" has several explanations; it is thought to refer to the chalky white limestone rock the town is built on, or perhaps the fertility of its soil, or for the plentiful  yield of its herds, or the famous choice olive oil (chelev - fat) produced from the local olive groves. Both Josephus and later Jewish sources from the Roman-Byzantine period mention the fine olive oil of the village. The surrounding area is full of rich pastures, and together with Meron, it was famous during the Second Temple Period for its dairy products.

Gush Chalav Under the Romans
Today its inhabitants call it Gesh which is a derivative of Giskala, the Helenistic name which Josephus Flavius used to refer to the area. After Gamla fell. Gush Chalav was the last Jewish stronghold in the Galilee and Golan region during the First Jewish Revolt against (66-70 CE). It was the home of Yochanan of Gush Chalav one of the main Kana'im of the Jewish revolt in the Galilee and later in .

Titus arrived on a Shabbos to conquer Gush Chalav, and Yochanan requested that he delay his attack in respect to the holy day. That night, Yochanan along with about 2000 warriors and residents who were affiliated with the Zealots, slipped out of the city. The next day Sunday, the city surrendered. When Titus discovered that Yochanan and his forces had escaped, he chased and killed many of them, but Yochanan managed to escape to .

Despite the Roman invasion, Gush Chalav was not destroyed and continued to be a large and important city with two shuls throughout the Roman and Byzantine periods. The Cairo Geniza records from 640 to 1099 CE reveal that Gush Chalav was a Jewish village during this period, and evidence of that fact has been found throughout the area in excavations. Ancient stones, such as door posts, thresholds, and parts of columns have been incorporated into the houses of present-day Gush Chalav.
.
Gush Chalav Through the Ages
The remains of a beautiful synagogue in Gush Chalav were discovered under a Greek-Catholic church in 1871 - 78. Some stones from the shul had been used to build this church. The ruins of another synagogue which was used from the 3rd to the 6th
century CE was found in an olive grove in the area. This is a square building opening towards and built in a similar style to other Galilean synagogues with rows of columns standing parallel to the walls.

On one column, an inscription in Aramaic reads: ”Yosseh Ben Nachum made this column, may he be blessed.” The building includes the ruins of a stage where the synagogue’s aron kodesh must have stood. During excavations both in 1905 and later in 1977 to 1978, archaeologists discovered that the synagogue was rebuilt four times. 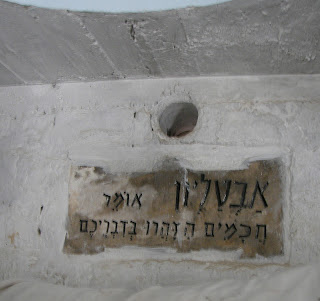 In his book Benjamin’s Travels, Benjamin of Tudella (a city in ) wrote about his visits to Gush Chalav where he found about 20 Jewish families. He also visted Tzipori, Meron,, Alma, and Tiberius, which were all Jewish towns and cities in those days.

In the 17th century the town was also inhabited by Druze who left at the end of the century due to a Bedouin invasion. In the early 18th century Maronites, who are Greek Catholics, and Muslims began settling in the town.

Jews lived in Gush Chalav continuously until about the middle of the 19th century. Then taxes the Ottoman Government placed on the Jewish land owners and the threat of jail for those who would not pay caused many Jewish farmers to abandon their lands and move to Tiberias and .

During the War of Independence, the "Arabic Rescue Army" established its base in Gush Chalav, and from there, they attacked Jewish villages in the area. On October 29, 1948 the village was conquered by the Israeli army. Many of its people, mostly Muslims, who took part in the fighting, ran away to . The new state of  then settled the village with Christian Maronites from other villages.

Today, Gesh has 3,000 citizens, most of whom are Christian Maronites with a 13% Muslim minority. 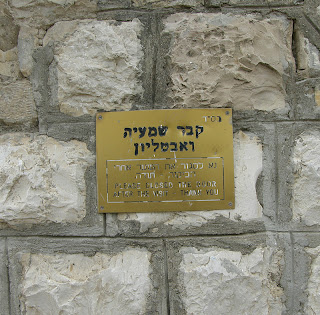 The Gravesites of the Rabbis  Shma’ya and Avtalyon are located at the entrance to Gush Chalav. They were the fourth pair of the Zugot (pairs) who stood at the head of the Sanhedrin. Their lives spanned the end of the Hasmonaim Period and the beginning of Herod's rule. They descended from a family of converts or were converts themselves, who can be traced back to the notorious Sancheriv, King of Assyria.

Shmaya and Avtalyon were greatly beloved by the nation for being chachamim gedolim and  darshamim gedolim  (Pesachim 70). One year as the Kohen Gadol left the Beis Hamikdash after Yom Kippur on his way to the traditional banquet made for emerging safely from the Holy of Holies, a great procession of the people escorted him. When crowds saw Shma’ya and Avtalyon, all the people turned from the Kohen Gadol, to his dismay, and gathered around them.

The grave of Yochia, the father of Rebbe Shimon Bar Yochai is found in Gush Chalav. A small car would be able to reach it, but it is very hard to access the gravesite with a bus. The graves of Yoel the Prophet and Meir the "Shaliach Tzibbur," who authored Akdamus Milin which is recited on Shavous, are also found in Gush Chalav. 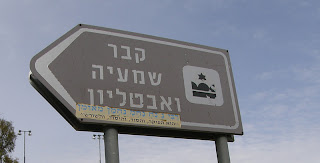 Gush Chalav,is located on Highway 89. To reach the gravesites of Shma’ya and Avtalyon, drive on the main road of the village and after about 120 meters, turn right onto a side road. Some 80 meters down the path is a brown sign pointing in the direction of the domed structure that has a double sarcophagus.

The Ein Gush Chalav Spring flows east of Gush Chalav. Nearby are the ruins of the synagogue from the Roman period with two rows of columns and foyers on the side, the remains of a roof, and the pillar with the ancient inscription. The surroundings have many nature walks and beautiful lush scenery.


Published in the "English Update"
Posted by Eretz Yisroel in the Lens at 11:56 AM