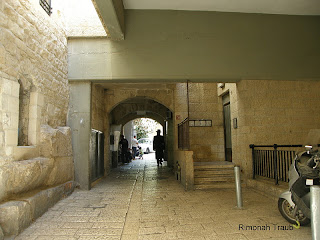 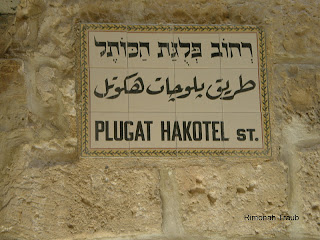 On the corner of Rechov HaYehudim and Rechov Plugat HaKosel, opposite the Cardo in the Jewish Quarter of the Old City, is an apartment building. There is no sign to mark the place, but tradition claims that this is where the Shelah Hakadosh had his courtyard.

Rav Yeshaya Horowitz was at the pinnacle of his success. After serving as Rav of many prestigious communities, he had been crowned to be Rav over the jewel of European Jewry — Prague. Nevertheless, in 1620 at the age of 60, he decided to fulfill his most fervent desire: he departed for Eretz Yisrael. He knew that he was leaving his beloved children and grandchildren forever, for in all likelihood they would not meet again unless they followed him, and this did not seem possible at the time. So, he started to write his monumental Shnei Luchos Habris (i.e.SheLaH ) so as to transmit to them his aspirations for their behavior. He was unable to finish it before he left, but completed it in Yerushalayim.

The journey over land and sea was long and arduous. In each place where he arrived, he was greeted as befitting his stature. Every community begged him to stay and lead them, but his heart was single-mindedly set on the Holy Land. 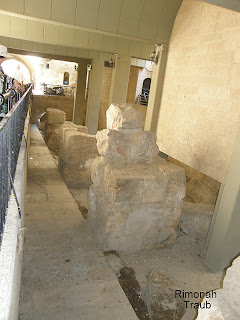 He was met in Damascus by a two-man delegation from Tzfas bearing an offer that he should become their Rav. A day later an emissary from Yerushalayim presented him with a ksav rabbanus signed by all the Rabbanim of the city, asking him to become their Chief Rabbi. As the specific goal of Rav Horowitz’s journey had been Yerushalayim, he did not have to think too long to make his decision: he gladly accepted the Yerushalayim post.

In Cheshvan 5382 (1621), the week of Parashas Vayetzei, Rav Yeshaya Horowitz entered Yerushalayim. That parashah states, “How awesome is this place, this is the gate of Heaven!” When he later composed a commentary on the siddur in commemo ration of that first Shabbos, he called it Shaar HaShamayim. The Bach, Harav Yoel Sirkis, wrote in his approbation to this siddur that when one reads it, one feels holiness from on high descending on every one of one’s limbs.

Rav Horowitz settled in an apartment near the Ashkenazic shul, within the Chatzer Ha’Ashkenazim. The following year was a Shemittah one. At that time, keeping Shemittah was not as it is today, but needed mesirus nefesh beyond our comprehension. In a letter, the Shelah stated he was willing to sell the coat off his back in order to fulfill this mitzvah to a tee. He said that the reason one comes to Eretz Yisrael is to sanctify oneself.

In Teves 1625 a gangster by the name of Mohammed Farouk took control of Yerushalayim, becoming its
absolute ruler. This despot instituted a reign of terror, arresting, beating and imprisoning many. Only very hefty bribes would release the incarcerated. The citizens of Yerushalayim went into hiding, and not even minyanim were held.

In Elul, after a few weeks of relative calm and much deliberation by the communal leaders, it was decided to
hold a Shacharis minyan on Shabbos Parashas Ki Seitzei. Halfway through the davening, the governing thugs broke into the shul. Rav Horowitz and 14 other members of the community were arrested. Only with the presentation of an enormous bribe were he and most of the imprisoned released. Faced with unbelievable danger, Rav Yeshaya Horowitz fled to Tzfas and then later settled in Teveria. 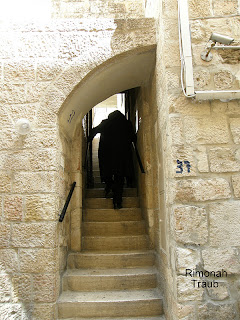 In 1630, shortly before his passing, he was asked to pasken over the dispensation of the yearly fund sent from the Diaspora and its allocation to the cities in the Holy Land. He is buried in Teveria, next to Rabban Yochanan ben Zakai and the Rambam.

Mohammed Farouk only left Yerushalayim in Kislev, after he had a terrible nightmare in which a well dressed old man who said he was Dovid Hamelech threatened him with death. The date of his departure, the 12th of Kislev, remained a day of rejoicing in Yerushalalyim for many years after.

Published in Hamodia.
Posted by Eretz Yisroel in the Lens at 3:31 PM