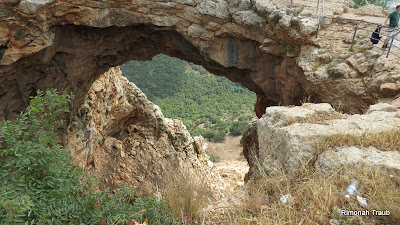 Speechless wonder is the reaction to the astounding beautiful vision seen though the Arch of the Keshet Cave at the Adamit Park in the Galilee. One of the most amazing natural wonders in Eretz Yisrael, the Me’arat Hakeshet — also known as the Rainbow Cave or Arch Cave — can be found up against the Israel-Lebanon border just a few kilometers from Rosh Hanikra and the sparkling blue Mediterranean Sea. It is situated amid the wild scenery on the cliffs of Nachal Betzet and Nachal Namer, on the Adamit  Ridge.

Its height of ¼ mile (400 meters) above sea level grants it a spectacular panorama that includes in its
vastness the Galilee, the Carmel range, the Haifa Bay (which looks surprisingly close), the ridge of
Rosh Hanikra, Nahariya, Acco, Yehi’am Fortress, Mount Meron and well into Lebanon. The lovely
breeze rushing by makes it a pleasure to be there, even on the hottest summer days.

One wonders why this massive natural stone arch bridging the mountains is called a me’arah, a cave. What is actually seen is a huge rock arch poised between heaven and earth, above the backdrop of the Western Galilee region. Although it is most impressive, where do we find a cave here? It would seem this arch is the only remains from the ceiling of a cave that collapsed a very long time ago, leaving this remnant. Rock hyraxes (shefanei sela, or rock rabbits) dwell on and in the arch.

Although I would not recommend it, rappelling from the arch is free and very popular, attracting
hundreds of extreme sports enthusiasts. But do make sure that you are either an experienced rappeller
or that you have an experienced rappeller with you. A sturdy metal guardrail to keep bystanders safe from plummeting downward and for assisting in the rappelling surrounds the cave. Embedded in the rock are anchors for fastening the ropes. The drop to the bottom of the cave is between 130-165 feet (40-50 m) and from the bottom there is a winding, adventurous track that leads back up to a parking area. The Bezet Stream, on the forest floor, winds through the land.

The clearly marked entrance to the Adamit Park is reached through road number 8993, off the 899 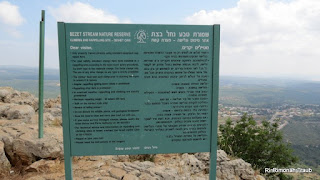 thoroughfare stemming from the coastal highway 70. There are parking lots, picnic tables, restrooms and drinking water faucets in the park area. A perfect place for walking and cycling, as well as for picnics, it has a paved, wheelchair-friendly trail that will lead you among scented flowerbeds and planted orchards to landscape observation points and many fun picnic spots, as well as on to the Me’arat Hakeshet. On this winding path one may have to jostle with many curious mountain goats as they graze on the steep slopes.

All in all, the park is a wonderful place for everyone — from the serious hiker to one using a wheelchair. An added incentive to visit is the fact that entrance is free.

Located next to Kibbutz Adom, the park has an area of about 70 hectares (173 acres). It grows fruit
trees such as carob, fig, citrus, almonds, pomegranates, raspberries, oaks and some of the brightest
representatives of Mediterranean flora. There are terraces planted with aromatic herbs, and the
planted woodland includes marked hiking trails. In about 1950 it was founded by the Keren Kayemet of Israel. The archeological remains found in the area are evidence of continuous settlement from the time of the Canaani up to the Ottoman period. 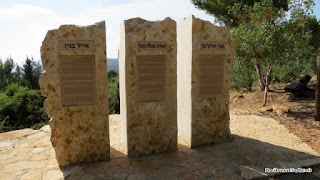 There is a scenic observation memorial point in the park that overlooks the Lebanese border, only a
few kilometers distance from the spot where three soldiers – Shani Turgeman, Wasim Salah Nazal and
Eyal Banin — were killed, and Eldad Regev and Ehud Goldwasser were kidnapped and killed, in July 2006. An explanatory signpost at the site relates how these reserve soldiers set out on what was supposed to be their final patrol before returning home. The pastoral silence was shattered when Hizbullah began to fire mortars at Israeli border communities. That was later revealed to have been
a diversionary tactic. Two IDF patrol vehicles were attacked with anti-tank missiles, and three of the
soldiers – Shani, Wasim and Eyal – were killed on the spot. Ehud and Eldad were kidnapped and taken
to Lebanon. After two years of uncertainty, their bodies were eventually returned to Israel for burial.
The Hizbullah attack and the kidnapping triggered the Second Lebanese War.
Posted by Eretz Yisroel in the Lens at 9:47 AM