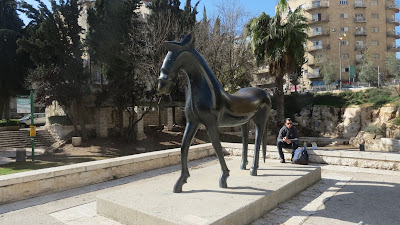 In the center of downtown is an emerald grassy area with a small man-made waterfall and pool. If you find yourself on Rechov King George near the old Hamashbir needing amenities this spot has some well-kept clean ones that are also free of charge.

Officially named the , (for an Israeli politician who served as a member of the Knesset between 1969 and 1977, and was also a Minister of Labor and Minister of Welfare), this tiny park is nicknamed by Jerusalemites “Gan HaSus” (Garden of the Horse) because of its statue of a black horse. The Venetian horse - created in bronze by Slovenian sculptor Oskar Kogoj-- was a gift from the of to in 1997.

Originally, when the distinctive bronze Knesset Menorah was presented to the new state of by in 1956, it was placed on the "Bor Shiber" (Pit) lot, that became this garden. The area  was then called the “Gan HaMenorah”. Eventually when the new Knesset building was inaugurated at Givat Ram, the Menorah was moved to the Wohl Rose Garden. Yet even in nearby parking lot still carried the name "Menorah Parking." 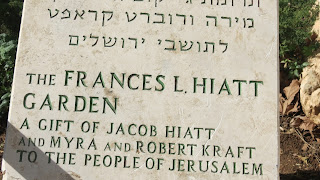 Around the park are engraved stones calling it “.” Myra Kraft, the daughter of Frances L. Hiatt, and her husband Robert have given away more than $100 million in donations since they were married in 1963. said she learned to give in her parents’ home.

Initially, its architect, Reuven Abram, intended it to reach a height of six stories, but only three were actually built. The building has a convex corner that follows the line of the intersection, and a saw-tooth stone strip (typical of Abram's style) that divides the first two stories from the third story. A similar stone strip appears in many other buildings that Reuven Abram designed in the city center, including the Beit Mar Chaim building opposite Beit Froumine.
During the War of Independence, construction of the building was suspended.

On 4 January 1950, Israeli Prime Minister Ben Gurion declared ’s capitol in spite of strong international protests. He ignored the United Nations’ resolution of 29 November 1947 whereby the of three world religions is supposed to be placed under UN administration.

Although Beit Froumine was, only a skeleton at the end of 1948, the government of the 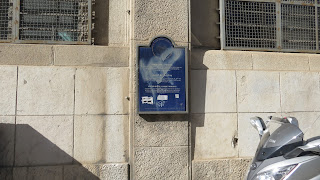 new state chose it to house the Knesset due to its large ground floor hall. The hall, with an upper balcony, was originally meant to be a bank. (Among other buildings considered for the Knesset was the .

Before this time, the Knesset had met in other locations, but on March 13, 1950, it convened in Beit Froumine which continued to serve as the temporary Knesset building until 1966. It was used for the first five Knessets. During each Knesset session, in the area of Froumine House was closed to traffic causing great commotion in the city. The Knesset moved to its permanent building in the Government Complex on Givat Ram on August 30, 1966.

Dramatic events are associated with Beit Froumine, such as the mass demonstration held in January protest of the Reparations Agreement with . Feelings ran so high that protesters threw stones at the building that shattered windows and reached into the hall. Also a hand grenade thrown at the government table in October 1957 injured Minister of Religious Affairs Moshe Shapira, David Ben Gurion, Golda Meir, and other government ministers.

After the Knesset left Beit Froumine, the building was occupied by the Ministry of Tourism, until 2004. Presently it houses the Jerusalem Chief Rabbinate.

Note: On most Fridays there is a crafts fair held in the between 10 am and 2:30 pm when the weather is good
Posted by Eretz Yisroel in the Lens at 12:04 AM