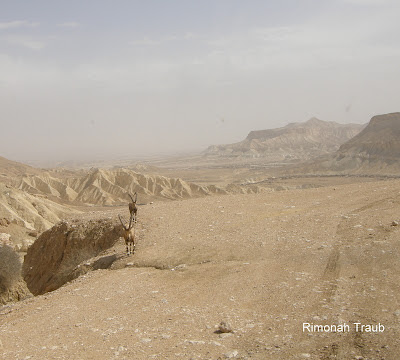 Israel’s Negev Desert is majestic. Covering more than half of Israel’s total land area, it is bustling with rugged beauty. With its different formations and colors, its stark physical beauty is outstanding, making it a captivating and enchanting place.
Not far from Sde Boker is a circuit route along Nachel Chaverim that will allow the hiker an easy trek in the Negev – one that will allow you to experience the awe-inspiring splendor of this desert. The twists and turns of Wadie Chaverim will lead to a small, very high hill. (From here the trail turns back.) Even if this hill is not climbed, the calm surrounding desolate area is so serene; magnificent many-colored hills encompass the area, affording breathtaking views. This feels like Eretz Bereishis. The voice of the desert wind is the only sound that can be heard for miles. The endless expanse hasn’t changed since the days when Avraham Avinu walked this desert and pitched his tent here. 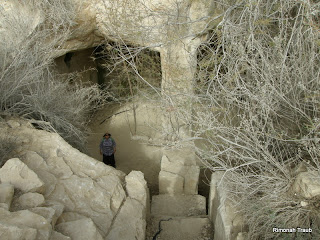 Near the beginning of the hike, a Nabatean cistern, Bor Havarim, is found. Although this is an area without much water or rainfall, the Nabateans, using their know-how in water storage, were able to fill cisterns and caves like Bor Havarim with rain water, making them flush with the rest of the landscape
The Nabataeans lived and thrived in the Negev. A mysterious people, whose first recorded appearance was in the year 312 BCE, some ten years after the death of Alexander the Great, it is not impossible that they were present much earlier.
They were still around during the Mishnaic and Byzantine periods. Josephus identified the Nabataeans of his time as descending from the eldest of Yishmael’s twelve sons, Nabioth, who was the father-in-law of Esav (Bereishis, 25:13, 28:9, 36:3), He claimed that the Nabataeans lived in an area that extended from the Euphrates to the Red Sea, and referred to this area as ‘”Nabatene.” He also says that it was the Nabataeans who conferred names on the Arabian nations. (Jewish Antiquities).
The Nabataeans spoke and wrote an early form of Aramaic strongly influenced by Arabic – they used Aramaic heavily in their inscriptions, but their names were in Arabic. This resourceful people established themselves, as a “huge transport company for precious goods,” thus building an impressive civilization based on merchant trade. They controlled the caravan routes from the Persian Gulf to the Mediterranean, trading in ivory, silk, spices, precious metals, gems, incense, sugar, perfume and medicine. They had control over Indian trade, including cinnamon. Their Perfume Route led from today’s southern Yemen (called “Happy Arabia” in Greek and Latin) to the ancient port of Gaza. Later they also added the silk trade from China. 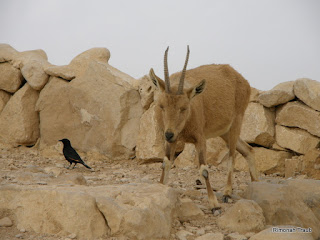 By establishing caravan way stations, spaced at exactly one day’s camel travel apart, where water, food and other supplies were obtained, the Nabataeans established a network of routes to travel the desert. Some of these caravans eventually developed into the very unusual “cities of the desert,” such as Avdat, Mamshit and Shivta, which reveal a high level of civilization.
While most of us think of the Nabataeans as people who transported goods in the desert by ship of the desert (camels), it has become increasingly evident that the Nabataeans were also a sea-trading people. There are ancient references to the Nabatu tribe, who lived in the Sinai and along the western edges of the Arabian Peninsula. These Nabatu were usually pirates who sailed the Red Sea plundering trading vessels. Later, they set up bases in a number of seaports, including the port city of Aila (modern day Aqaba), which is only some 120 km from present day Petra. After 556 BCE, the Edomites began a gradual migration north, into Jewish lands that had been emptied by Sancherev. The tribes of Arabia also began to move northward. From their port city of Aila, (Aqaba) the Nabatu settled east of the Syro-African rift between the Dead Sea and the Red Sea, that is, in the land that had once been Edom. Petra, located deep in the Sandstone Mountains of southern Jordan, became their capital. Some say it is none other then the famous clefts of the rock mentioned by the prophet Ovadiah.
It seems that some Edomites remained behind. Those that emigrated into Judeah became known as “Idumaeans.” These were some of the people who opposed the rebuilding of Bayit Sheini and the rebuilding of the city walls of Jerusalem by Ezra and Nechemiah. Yochanan Hyrcanus converted some Idumaeans to Judaism. Herod the Great (born about 73 or 74 BCE, died about 4 BCE) had Edomite genes from his father’s (Antipater) side and Nabatean from his mother’s (Cypros).
In addition, the Nabataeans were expert farmers who tamed their harsh desert surroundings, making the best of the limited rainfall. They harvested every drop of precious water into a complex system of channels and cisterns. They developed elaborate hydraulic systems, including dams to collect run-off water, reservoirs, ceramic pipes and siphons. They prepared whole hillsides so that the run-off from winter rains flowed into their orchards in the valleys. Using their intimate knowledge of the desert, they harnessed winter floods to harvest crops in significant quantities in the Negev. The Nabataeans built dams in their fields to halt the treacherous flash floods, allowing the retained moisture to seep slowly through the heavy soil. They meticulously cleared their fields’ stones encouraging a more efficient moisture penetration. The heaps of stones they created can still be see today. Some say these heaps served to support vines. The dew, from the overnight cold air would trickle through the heap of rocks, watering the vines without rapid evaporation. In an area with only 100 mm. of annual rainfall grapes, requiring 500 mm of water per annum, flourished.
In the beginning the Nabateans were completely nomadic. Having gained wealth and power, they altered their ways planting orchards, building houses and making wine. They did so with a “passion” as if overcompensating, as it were, for their past “desert” ways. As a result of their extended trade route, the Nabatean culture was highly influenced by Hellenistic Greece, Rome, Arabia and Assyria.
The Nabateans seemed to have abandoned Petra during the fourth century CE. Archeological evidence shows that their exodus was organized and unrushed, which leads us to believe that they were not driven out. The most likely explanation for their exodus is that when the trade routes were no longer necessary they moved north. (E.g. Trajan improved the King’s Highway to Damascus (Trajan’s Road) to such an extent that the route across the Negev became superfluous). The Nabateans thrived for a time, but their distinctive livelihood was gone. Eventually, they assimilated into the Roman world and simply faded away.
Yeshaya (Perek 60) informs us of the ingathering of the Jews and the rebuilding of Yerushalayim in messianic times. At the time the nevuah was given, Qedar and the tribe of Nebayot were renowned for sheep-raising and the wealth it brought them. Using the mashal of the wealth of these tribes theNavi enlightens us how rich we will be at the time of the Geulah. The flocks of the Nabateans will be sacrificed in Yerushalayim (ibid, 60 .7)
The book of the Maccabees has a number of references to the Nabateans. One of them tells of Aretas the king of the Nabateans, who held Jason the Jewish high priest in 169 BCE captive.
Directions: – Wadie Chaverim is about 10 kl (7mit or so) from the Sde Boker junction along Kvish 40, in the direction of Mizpeh Ramon.
Published in the Jewish Press.
Posted by Eretz Yisroel in the Lens at 1:04 PM