During the last months of Moshe Rabbeinu’s life the Jews were encamped on the plains of Moav, next to the , across from Yericho. Their first view of the was of the Judean Hills. The lies on one of the last cliffs marking the edge of the Judean highlands. The majestic wilderness vista seen from the end of the moshav is captivating; it speaks to the soul. Part of the sprawling town of is seen beneath the tatzpit (observation point).

In her excavation of the ancient city of , carried out from 1952 until 1956, Kathleen Kenyon claimed she did not find the walls. This (lack of) finding was based on her warped assertion that the Biblical narrative did not take place. Obviously, lack of evidence is not evidence of lack, and her not finding the walls means one thing and one thing only: She did not find the walls. The reason for this is clear, as according to Chazal thewalls sank very deep into the earth, beyond the reach of any archeologist, and this is why she did not discover them.

From the lookout, the fortress of Dok (Aramaic for “viewing point”) is visible. Josephus reports gruesome event during the reign of the Chashmona’im that took place here. Shimon, the last surviving Chashmona’i brother, achieved true independence and sovereignty of Yehudah
(). He proclaimed himself nasi. As a wedding gift to Ptolemy ben Chovov (who married Shimon’s eldest daughter), Shimon gave him rule over Yericho. However, Ptolemy felt he had been cheated, since he had anticipated being sole ruler over all of the Land.

He therefore forged a pact with Antiochus VII wherein he undertook to kill his father-in-law and all his brothers-in-law. Ptolemy invited the family to attend a lavish family seudah to be held in his Yericho fortress of Dok. Unsuspecting, Shimon and two of his sons arrived at the venue … only to be chopped to death by Ptolemy’s guards. Ptolemy then sent agents to to kill his third, last surviving brother-in-law, Yochanan Hyrkanus, who had not attended the party. Yochanan, though, managed to kill the would-be murderers.

Yochanan declared himself nasi in his father’s stead in 135 B.C.E. and then marched on Dok with a large force of men. Ptolemy paraded Yochanan’s mother each day on the ramparts of the fortress. Many times she was beaten in full sight of her son. She begged Yochanan not to yield to Ptolemy and to continue the siege. Unfortunately, just then Antiochus VII kept his part of the bargain and attacked Yerushalayim. Yochanan was forced to hurry back to defend the capital of his kingdom. The vicious Ptolemy killed his mother-in-law and wife and then fled, never to be heard of again in Jewish life.

Dok later became a Herodian fortress guarding the link road. The name is echoed in Ein Duk with its bountiful springs of excellent water, which is about four miles northwest of modern Yericho.

Slightly in front of Dok is a Hasmonean-era for that was refortified by Herod and named Kypros after his mother. It resembles a miniature Herodian.

Herod’s palace in Yericho was a place of intrigue and bloodshed. At the beginning of his rule in 36 B.C.E., Herod forced the Hasmonean princess, Miriam (Mariamne) to marry him. Her brother Aristobulus was handsome and very popular with the people, as he was a descendant of the Maccabees. Herod allowed him to become the Kohen Gadol.

However, within a short while Herod invited his young brother-in-law Aristobulus to a swimming party in his Yericho winter home, where he had him drowned. Alexandra, Herod’s mother-in-law, came before Marc Antony with the accusation that Herod had murdered her son, but exonerated Herod. Herod eventually punished the bereaved mother for her act of defiance. 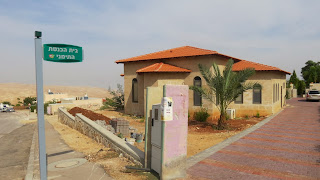 Mitzpe Yericho is a 20-minute drive from the outskirts of on Highway One that leads down to the . Its population is 70 percent religious and the yishuv maintains very specific halachic standards. For example, for acceptance to the yishuv married women must cover their hair.

The main shul, which is Ashkenazi, is located in the middle of the village and serves as its spiritual center, with many Torah classes taking place there. Many tourist groups visiting the take advantage of Mitzpe Yericho’s convenient location and daven in the Central Synagogue before beginning their trip. There are also two Sephardi synagogues and a Chabad shul, a Yemenite shul, a Carlebach Minyan (Kol Yehudah,” in loving memory of Yehuda Aryeh
Brand, z”l, who died tragically at age 18), and several other small, functioning minyanim.

Mitzpe Yericho is also home to the Jewish Temple School, where a full-size replica of the Beis Hamikdash is under construction in an area measuring ().

There are currently more than 450 families (approximately 15 percent of whom are English speakers) living in Mitzpe Yericho. About 350 live in regular houses, while the rest live in temporary housing (mobile homes and “eshkubiot”). There are plans to build an additional 1,200 housing units. In May 1997 the IDF dismantled two illegally placed mobile homes in Mitzpe Yericho.

The residents of the yishuv are engaged in a wide range of occupations: kollel students, doctors,
computer programmers, teachers, businessmen, and social workers.

Tishrei 5738 (October 1977), on Sukkos, and was supposed to be located on government land adjacent to . Due to the objection of then- Defense Minister Ezer Weizman, they were moved to Mishor Adumim. A few days later, Agriculture Minister Ariel Sharon suggested that they relocate to a barren hilltop, “Tibek Riash,” overlooking Yericho. (The fact it overlooks Yericho gave Mitzpe Yericho its name.) Within days, the settlers rented mobile homes and tents and established the community on this hill. Electricity was supplied sporadically by a generator. In 1981, the construction of permanent homes began.
Today there are many trees in Mitzpe Yericho. All other countries have deforested their lands but
Eretz Yisrael ended the century with more trees than it began. There is a tradition that a prelude to the Messianic era will be the cultivation of Eretz Yisrael. These trees on this desert terrain are surely an indication of promising times ahead.

Vered Yericho (Rose of Jericho) is a moshav near in the . It was founded in 1979 as a result of the disassociation of the secular nucleus from the religious nucleus in Mitzpe Yericho.

Posted by Eretz Yisroel in the Lens at 6:40 PM