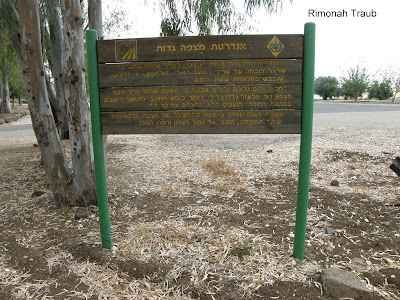 The 19 years from the time of the establishment of the State of Israel in 1948 until the Six Day War were a
living nightmare for members of the kibbutzim in the Hula Valley. Trigger-happy Syrian troops, stationed above in the Golan Heights, fired incessantly on the residents below, and more than 400 shooting incidents occurred. Over a thousand shells were fired at Kibbutz Gadot alone on one terrible day. Children played, studied and slept inside underground shelters as farmers tilled their fields, constantly accompanied by tanks. In fact, the children of the area very called “yaldei hamiklatim — children of the shelters.”

At the beginning of the Six Day War General Moshe Dayan had no intention of capturing the Golan, but
because many high army officials were members of the Hula kibbutzim, they pressured him to retaliate on the Heights. With the help of Hashem, the area was captured. 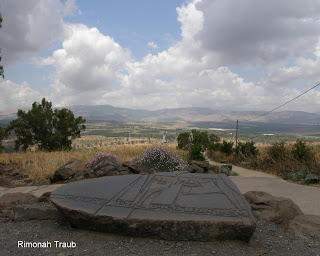 Mitzpe Gadot is located where there was once a Syrian bunker. Captured in the Six Day War, this area has been turned into a tourist site, as well as a memorial spot. At Mitzpe Gadot there is a tall, triangular concrete monument to commemorate fallen Israeli soldiers of the 33rd Battalion of the Golani Brigade, located at one of the former Syrian bases. This was the site of very harsh battles during the 1967 war. Also memorialized here are boys from the same battalion who were killed during the Yom Kippur War in 1973 and in the Lebanon campaign in 1982.

At this site are benches shaded by eucalyptus trees, from which the beautiful eastern Hula Valley can be seen. The eucalyptuses were planted by the Syrians at the behest of Eli Cohen, a famous Israeli spy to Syria (see below.) In fact, the capture of this area is widely attributed to the intelligence provided by Cohen. An audio guide at the spot gives information and history of the area. Songs of the era of the Six Day War and the 19 terror-filled years before are inter-spaced in the facts given. As you sit there, try to imagine the fear and insecurity of spending night after night in underground shelters or plowing your fields from behind tanks due to the Syrian’s strategic advantage.

The outlook has been made wheelchair and strollerfriendly.

Caution: The site of Mitzpe Gadot is safe, but don’t explore beyond any marked paths, because there may
be undetonated Syrian minefields.

Directions: Off Highway 91 and 1.5 kilometers northeast of the Bnot Yaakov Bridge.


Eli Cohen (December 26, 1924 — May 18, 1965) was an Israeli spy, best known for his work in Syria. Using the alias Kamel Amin Thaabet, (commonly pronounced Saabet), he developed close relationships
with the political and military hierarchy and became chief adviser to the Minister of Defense. He was eventually exposed by hired Soviet experts and was executed in Syria in 1965.

It is told that he convinced the Syrian military to plant eucalyptus trees at the site of each of their bunkers. Eli Cohen then informed Israeli military intelligence that a eucalyptus meant a Syrian army base. He also told them an important secret plan by Syria to create three successive lines of bunkers and mortars; the Israeli military would have otherwise expected to encounter only a single line. The intelligence he gathered was an important factor in Israel’s success in the Six Day War.

Till today, requests that his remains be returned to Israel have been denied by the Syrian government. The late Syrian leader Hafez al-Assad, said that Eli Cohen’s burial site is unknown, claiming that the Syrians buried Eli Cohen three times, to stop the remains from being brought back to Israel via a special operation.

A memorial stone has been erected to honor Eli Cohen in the Garden of the Missing Soldiers, at Mount Herzl in Jerusalem.
Published in Hamodia

Posted by Eretz Yisroel in the Lens at 8:33 PM