The Tomb of Yehudah Bar Ilai© 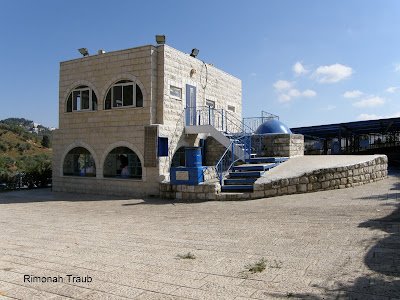 Written by Vardah Littmann           Photos by Rimonah Traub
Www.israelcamerafocus.blogspot.com
Not far from the entrance to Tzfas is a medium-sized ancient building with a courtyard, built over a burial cave. This is the tomb of Rebbi Yehudah Bar Ilai, who was born in the city of in the and whose yahrzeit falls this coming week on the 14th of Iyar. He was one of the five talmidim of  Rebbi Akivah and among the greatest of the fourth generation of scholars of the Mishna. Of all the many Rabbi Yehudas mentioned in the Talmud, he is the only one referred to as  Rebbi Yehuda. 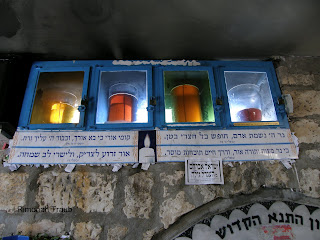 The appointment of Rebbi Yehudah helped to save the Torah community. The Romans looked with disfavor at the office held by the Nasi and therefore did not allow the Mesivta (assembly of sages) to meet. But now the sages could meet with Rebbi Yehudah at their head. (Rav Avigdor Miller Z'l) 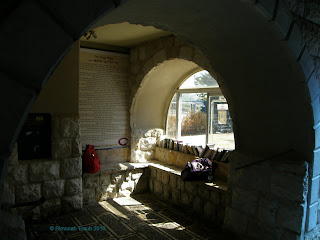 Rebbi Yehudah Bar Ilai would always stop whatever he was doing to fulfill the mitzvahs of preparing the dead for burial and raising money to help brides ]prepare for their weddings.  He would dance before brides waving a branch of haddasim while remarking that the  bride was "noeh ve' chasudah"-- "beautiful and pleasant".

There is an ancient tree behind the tomb of Rebbi Yehudah Bar Ilai. It is claimed that if you take a splinter from the trunk of this tree and carry it in your purse, then you will always have money in your purse. Saying ten verses of Tehillim next to Yehudah Bar Ilai's grave is also a segulah for parnossah.

There is a huge stone near the entrance of the building. On it is engraved instructions for a another special segulah for good livelihood. Visitors are instructed to walk around the building seven times in a counterclockwise direction, as they recite Psalm 29 and the passage Ana b'Koach.

Why so many segulahs for good livelihood at Rebbi Yehuda Bar Ilai’s gravesite when he himself suffered from the direst of poverty? He and his wife were eveb forced to share the same coat. When Rebbi Yehuda went  out, she had to stay at home, and vice versa. 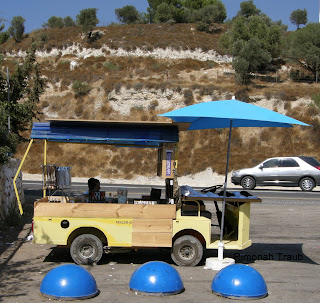 Once there was a meeting of the sages, and Rebbi Yehuda could not attend because it was his wife’s turn wearing the cloak. As a result, he was sent a very expensive garment for his use. Rabbi Yehuda refused to accept it and lifted the mat where he was sitting, revealing a huge number of gold coins. He said, “If I wanted to be rich, I could be, but this would mean I would detract from my portion in the Next World. I prefer to save my riches for there.”


It is asked how they could both wear the same article of clothing, what about the halacha forbidding one sex to wear garments of the other sex? The answer is that this cloak was so non-de-script that it could worn by any gender. Despite all this Rebbi Yehuda Bar Ilai’s face was always illuminated with happiness. His happiness made him appear very  well nourished  even though the land was suffering the after effects of the war of Beit Tar and the Shmad  and was ravaged with poverty.


In 1949, Jews from Tsfas came and made a public ceremony next to the tomb of Rebbi Yehuda Bar Ilai’s as they buried the soap made by the Nazis, may their names be eradicated. This soap was made from the fat of murdered Jews, may G-d avenge their deaths. The soap was brought to by someone who survived the inferno

To reach his tomb, travel on Road 89 until the Atz Zetim Junction, and then turn north to Road 886. Keep driving about 950 meters, and on the right side of the road is the resting place of Rebbi Yehudah Bar Ilai. 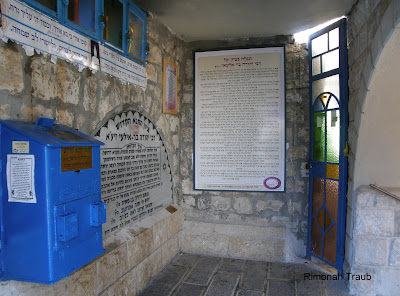 Posted by Eretz Yisroel in the Lens at 8:04 PM