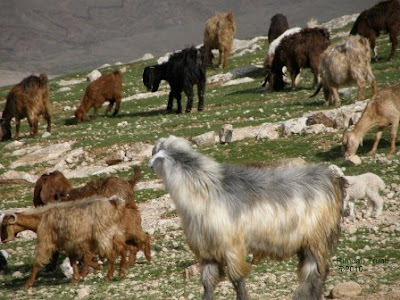 By: Vardah Littmann
Photos: by Rimonah Traub
www.israelcamerafocus.blogspot.com
A road through the desert connects Jerusalem with Mount Azazel or Jabel Muntar. Located in the Judean Desert 14 km southeast of Jerusalem, this site is believed, by many , to be the mountain peak where the “Seir L'Azazel” was pushed to its death during the Yom Kippur service at the time of the Bais HaMikdash.
Most likely, this very road was used to march the scapegoat to its death on the high place of Mount Azazel. The Mishna says that along this path they erected ten booths for the Yom Kippur day procession. In each booth food and water were placed for the one leading the goat, but never once did those men eat or drink. Today, this rugged dirt road can only carry 4by4 small vehicles or the Bedouin donkeys and camels.
Because of drilling in the hope of finding natural gas on Jabel Muntar in the early seventies, many new pathways to ascend the mountain were formed. The summit is 524 meters above sea level, the highest peak in the area.
Standing on the mountain peak, you breathe pure, fresh air and enjoy a magnificent view of the surrounding area. From this ridge of Azazel, the Jerusalem sky-line on distant the horizon resembles a lace edging to the desert. The Dead Sea appears as a blue streak in the yellow-golden-copper landscape with the silver-gray Harei Moav as back-ground. On a clear day, you can see the northern Judean Desert, the eastern Judean Hills, the southeast Sharon, the eastern and southern Jordan Valley, and the Moav and Gilad mountain ranges.
The panoramic view gives the mountain its Arab name Jabel Muntar which has several meanings, including “Outlook Mountain” and “Mount of the Watchman.” Some say the name means the “Leaped or Skipped upon Mountain” or “Leaping Mount” which may refer to its role in the Yom Kippu service.
The ruins of an ancient Byzantine monastery built around the year 450 C.E. are visible here at the summit, as well the remains of English trenches from the First World War. An aqueduct was constructed by the Hasmoneans from the foothills of Jabal Muntar to the fortress Hyrkania which can be seen form the mountain peak. These ancient water sources are now used by Bedouins who live in the area.
The Bedouins pasture their sheep in the surroundings, much as Yaacov Avinu must have shepherded the flocks of Lavan in this week's parsha of Vayeizeh.
This desert land seems untouched by the modern world, and it appears like a scene straight out of the Tanach.One may feel one can escape technology on this hill deep in Midbar Yehudah in Eretz Bereishit .. But on my surreal visit in Azazel as I was sitting and absorbing (and I must enjoying) the lack of civilization. Suddenly --- my cell rang. It was my daughter---all the way from Brooklyn U.S.A!
There is no public transportation to Mount Azazel, but you can join one of several guided tours to the desert in an open safari truck equipped for riding on rough terrain. 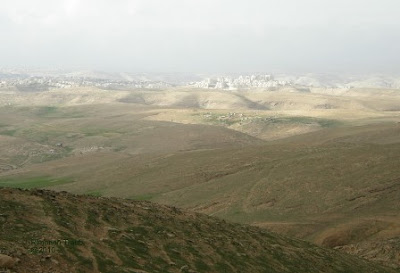 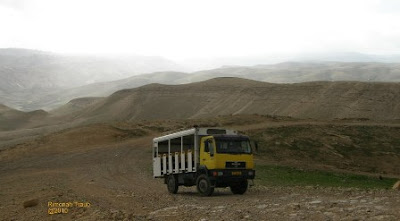 Posted by Eretz Yisroel in the Lens at 11:57 AM