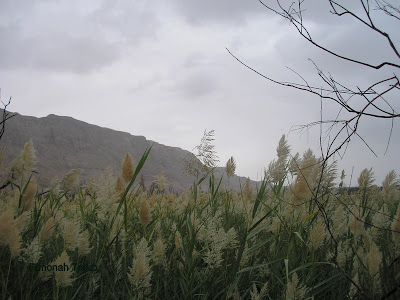 Only half an hour’s drive from , the majestically beautiful Einot Tzukim Nature Reserve is a lush, green oasis surrounded by miles of flat arid, desert. Bordering on the , it’s the lowest (meaning closest to sea level) nature reserve in the world, and the golden-purple-green beauty of the place gives visitors the feeling that they’ve entered another dimension.
After reclaiming this area during the Six Day War, declared it an official nature reserve in recognition of its unique qualities and renamed it Einot Tzukim (). The reserve consists of three parts. There’s the closed reserve in the north which is completely sealed off to visitors to protect the native fauna and flora of  the area. Then there’s terrain which includes pools of mineral water for bathing, lined by high shady foliage. And lastly, there’s the section of land which can be entered only with a guide for safety reasons.
There are about 150 different water springs of various temperatures and degrees of saltiness that flow all through the reserve. They are the major source of water for the thick vegetation packed with date palm trees, reeds, bulrushes, and tamarisk trees. The animal life includes jackals, wolves, foxes, hyenas, leopards, and many types of birds. The pools and streams are teaming with fish .
The oasis of Einot Tzukim is known as Ein Fashkha or Ein Feshkha in Arabic.  It’s amazing to think that this whole of the Dead Sea area was once just as fertile as the Einot Tzukim reserve before being transformed into an “eretz melech” (salt land) because of the evil of the inhabitants of Sodom.
Sadly, the has been steadily shrinking for decades. There is no longer a beach at Einot Tzukim although the previous beaches are clearly marked. Pools for bathing have been built to catch the water of the springs.
The Ein Feshkha (“feshkha” means “split” or “broken”) Spring provides brackish water. Not far away, there is a dried-up spring which is a few meters higher. It is believed that this spring provided fresh water for the ancient settlement which was located nearby.
In the 1950's, the ruins of this ancient agricultural village, dating from the Second Temple Period, were excavated. The highlight of the archeologists’ finds is a site for the preparation of balsam oil, known in the Talmud as “shemen afarsemon.” The ruins seem to date from the same historical period as the ruins in , and it’s possible they were a settlement of the same community.
Since no Qumran-style pottery or manuscripts were found at this site, its precise relationship to is an open question. It’s possible that its ancient inhabitants supplied food, especially dates, date-wine, and date-honey, to . They may have also produced and sent indigo to . The main building seems to have the same layout and orientation as a similar one in , although it is smaller in size.
The Einot Tzukim Nature Reserve  is located about 3 kilometers south of on route 90. During the summer, special buses travel from to Ein Feshkha on separate days for men and women.
The Egged Buses 486 and 487 from also bring visitors to the nature reserve. 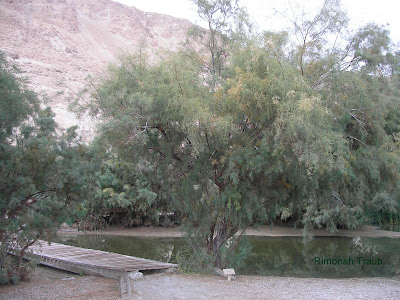 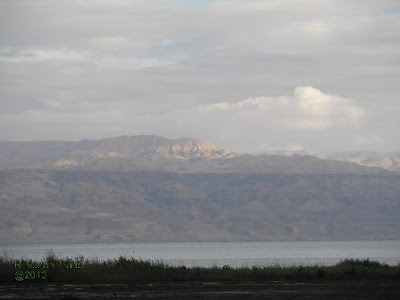 Posted by Eretz Yisroel in the Lens at 5:23 AM