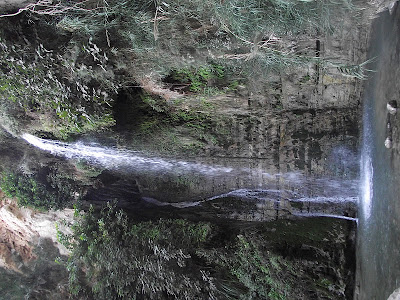 By Vardah Littman
With its combination of stony desert mountains and lush oasis fed by mountain springs, Ein Gedi, ("spring of the goat”) is one of the most beautiful places in the world. The area was allotted to the tribe of Yehudah (Joshua 15:62 ) and is situated eleven miles north of Masada and approximately thirty-five miles southeast of Jerusalem on the eastern edge of the Judean Desert, midway along the western shore of the Dead Sea.
From 1948 until the Six Day War it was within the Green Line, but could only be reached from the back. In the fifties, the kibbutz movement established a kibbutz there, followed by the first field school of Chevra l’haganat haTeva. The war enabled a more direct approach to the area, and in 1972 Ein Gedi was declared a nature reserve.
Watering the Oasis 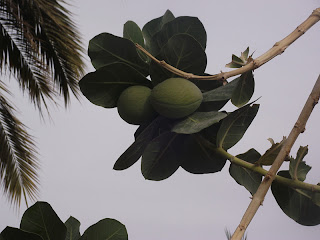 A severely-gorged mountain range which is six hundred feet above the Dead Sea acts as an aqueduct to bring water in abundance to En Gedi, thus producing the largest oasis on the shore of the . The oasis is watered by four perennial springs: , Shulamit Spring, Ein Gedi Spring and Ein Arugot, all fed by the rainfall runoff that flows eastward from the Hebron Hills watershed toward the . The Irrigation provided by these springs of continually flowing water encourages a lush and fruitful ecology. All together, the springs generate approximately three million cubic meters of water per year. Much of the water is used for agriculture or is bottled for consumption. 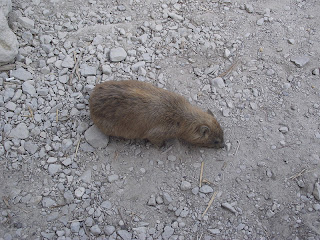 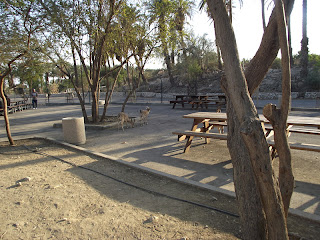 The warm climate, diverse vegetation, the presence of date palms, and the supply of water attract many animals, including rabbits, deer, the ibex, hyrax, leopard, and a variety of bird species, including vultures, eagles, and falcons. The many species of resident birds are supplemented by over 200 additional species during the migration periods in the spring and fall. The numerous caves and grand rock formations provide ideal shelter for these creatures who are mainly friendly and unafraid of man. The mountain-hare may even let you pet and stroke them, and the deer wander around freely among the picnic tables at the entrance to the reserve.

Ein Gedi in Tanach
Chatzatzon-Tamar, meaning "the pruning of palms" in Bereishis 14:7 is identified as En Gedi. Here evidence of terraced date farming, dating back to the period of the Avot, has beEn found. The natural water supply was harnessed and utilized to irrigate crops. In Bereishis, Chatzatzon-Tamar is mentioned as being an Amorite city which was smitten by Chedorlaomer in his war against the five cities of the plain. 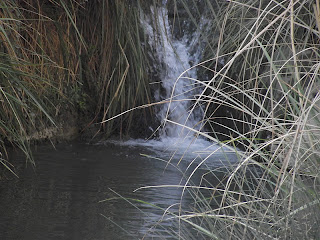 The natural camouflage of thick vegetation and numerous caves in this beautiful oasis helped Dovid find refuge from Shaul (Shmuel I; 23). It was here that Dovid spared Shaul’s life when Shaul Entered the cave where Dovid and his men where hiding. Dovid only cut off the corner of Shaul's robe. Thus Dovid demonstrated the character traits of mercy, compassion, and obedience to God’s will (Shmuel I 24).
King Shlomo maintained a stronghold in Ein Gedi to protect his kingdom from enemies. At the time of Jehoshaphat’s reign, , , and invaded using "the ascent of Ziz" (Divrei HaYamim II; 20:16), a route that passed near Ein Gedi (Divrei HaYamim II; 20:2),
In Shir HaShirim Knesses Yisrael uses the description of flora of strong fragrance in the vineyards of Ein Gedi (1:14) to describe Hashem’s favors to us. 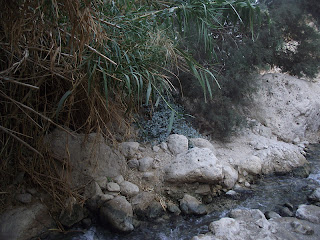 Ein Gedi in Jewish History
The Babylonians destroyed the Israelite settlement in Ein Gedi. When the Jews returned from Bavel, they resettled the area. During the Hellenistic period the settlement succeeded immensely.
The agricultural development reached its climax during the Hasmonean era. Compared to that time, the modern Kibbutz Ein Gedi cultivates less than half the land that was planted then. Besides tropical and medicinal plants that were grown, dates were a primary crop. The plentiful sunshine and the all-year supply of water made for superior harvests. 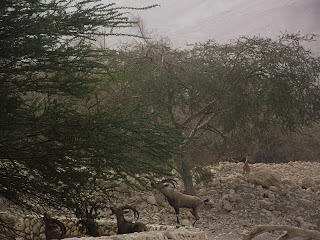 The Hasmonean kings fortified Ein Gedi, making it a royal estate. Before the Churban there was much religious activity in the Midbar Yehudah area. Pliny the Elder, a Roman historian of the first century, claims, that some of the Essenes whose main settlement was in , lived in Ein Gedi. A water pool and 30 living quarters, thought to have belonged to them, have been discovered near to the Ein Gedi spring, higher up in the mountains.
Josephus praises Ein Gedi for its palm trees and balsam. The Romans found out about the profitable perfume industry in Ein Gedi. Marc Anthony appropriated the persimmon groves for the Egyptian queen Cleopatra. King Herod rented them back after her death. During the First Jewish War in order to prevent the Romans from acquiring the groves, the Jewish inhabitants of Ein Gedi tried to uproot them . The Romans did all in their power to prevent this. 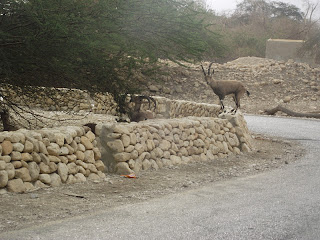 Josephus claims that a few years before the destruction of in 70 CE, militant Zealots from Massada attacked Ein Gedi. They slaughtered 700 women and children and stole all the produce which they took to their stronghold on Massada. (War 4:401-4). After the Romans occupied the Ein Gedi area, peace was imposed in the region. The Roman soldiers built a bathhouse in the place.
At the time of the Second Jewish War (130-135 CE), Bar Kochba established Ein Gedi as his main governmental center. He withdrew into caves in the area when the Romans advanced on Ein Gedi. Once, while hiding in a cramped cave, he sent a letter to the residents of the town stating his grievance that he was not getting enough supplies: "From Shimon bar Kosiba to the men of Ein Gedi, to Masabala and Yehonathan bar Beayan, Shalom. In comfort you sit, eat, and drink from the property of the House of Israel, and care nothing for your brothers." An additional one of his letters requests two donkeys with lulavim esrogim, hadassim, and aravot, so he could celebrate Sukkos. 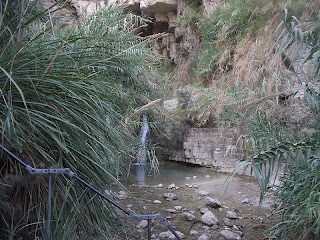 In the lower room of the Shrine of the Book in the , you can see an exhibit of leather sandals and other items, plus letters from the time of the Bar Kochba revolt. The dry desert climate kept the relics amazingly well preserved.
In the third century, Jews returned to Ein Gedi and built a small township. It seems they were very rich since they built an impressive and beautiful shul. Evidence has been found of workshops used in the perfume industry to distill products made from balsam.
The Jewish town of Ein Gedi was an important source of Balsam for the Greco-Roman world until its destruction by Byzantine emperor Justinian as part of his persecution of the Jews in his realm. In the Ein Gedi synagogue a Judeo-Aramaic inscription on a mosaic warns inhabitants against "revealing the town's secret" to the outside world – possibly the methods for extraction and preparation of the much-prized balsam resin, though this is not stated outright in the inscription.
The prophet Yechezkel predicted that one day fishermen would line the shores of the from Ein Gedi to Ein-Eglain. At that time the fish in the sea will be exceedingly abundant. (47:10).
Modern Day Ein Gedi
The area of the nature reserve is 14,350dunams. This includes the Ein Gedi national park which features several archaeological sites including a first century CE village. This park was declared in 2002 and covers an area of 8 dunams. In the summer of 2005, nearly two-thirds of the oasis burned to the ground after a visitor dropped a lit cigarette. 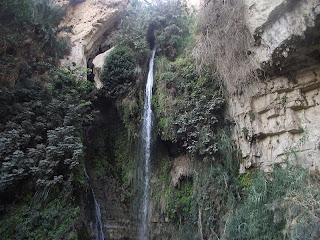 As you walk on the lush trails of Ein Gedi with its beautiful foliage, exotic birds, and range of wildlife, it is amazing to think that the surrounding area was once just as fertile as the Ein Gedi reserve. The Dead Sea area was transformed into an “eretz melech” (salt land) because of the evil of the inhabitants of . It seems that Hashem left us a number of oases around the so we can contemplate the stark difference between the desert and these fruitful places and realize the devastation and havoc that sin causes.
.
Posted by Eretz Yisroel in the Lens at 11:27 PM