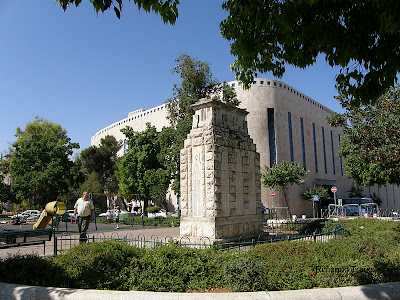 Allenby Square — situated behind Jerusalem’s Central Bus Station, in the neighborhood of Romema — got its name after Field Marshal Edmund Allenby was “deprived” of “his” original square. Initially, an area near the Jaffa Gate was called Allenby Square, to commemorate the victory ceremony Allenby held at that square in 1917.

During the period of the British Mandate, a British war memorial was set up in the midst of an empty field on the hill where the first “surrender ceremony” between the British and the Turks had taken place. It commemorates “the multiple surrenders“ that the English demanded of the Ottomans. 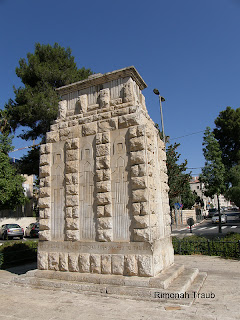 The three-meter-high rectangular monument is, very similar in style to other British World War I memorials. It was designed by the architect Wallcousins and was erected in 1920. The monument has images of medieval knights on it, being that at the time many Englishmen likened the 1917 conquest of Palestine to the Crusades. It was planned that a statue of Allenby would be put on the top of the monument, but this never actually happened.

The memorial bears the date of December 9 (rather than 11 — see box), and has the following text engraved on it: “Erected by their comrades to those officers, NCOs and men who fell in fighting for Jerusalem. Near this spot, the Holy City was surrendered to the 60th London Division, 9th December 1917.”

Israeli researcher Dov Genehovsky claims the monument was built from the stones of the Ottoman clock tower which had been erected on top of the Jaffa Gate at the accession of the Sultanm Abdul Hamid, and which the English dismantled.

As time went on, the monument gradually became surrounded by houses of the Romema neighborhood. After the state was created in 1948, the Jerusalem Municipality enclosed the monument with an oval fence and planted some bushes around it. The area was never officially declared a city square nor given a name, and became increasingly neglected. 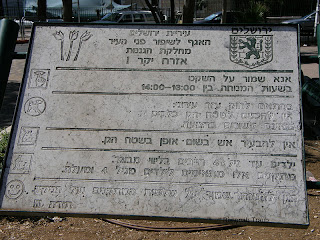 The Six Day War united eastern and western Jerusalem on June 7, 1967, and the original Kikar Allenby was renamed Kikar Tzahal (IDF Square). The name of Kikar Allenby was transferred to the Romema’s memorial square, despite the fact that Allenby’s ceremony was not held at this site. No improvements were made. Only after many protests by neighbors did the Municipality refurbish the square in 1994. A proper playground, with
new paving and lighting, was created when Jerusalem’s Central Bus Station was built.

It should be noted that the conquest of the Holy Land by the British was at first received by its Jewish inhabitants with joy. For the first few years of English rule, the Jews of Yerushalayim celebrated,
thanking Hashem that the British had gotten rid of the evil Turks. But as time went on, since Yishmael is the
“mechutan” of Esav, the British showed a smilingcountenance to the Arabs, but were extremely harsh and unyielding to the Jews in Eretz Yisrael and those trying to enter. The British turned a blind eye to Arab activities against the Yishuv, in effect giving the Arabs a helping hand to terrorize the Jews, and actively worked to limit Jewish Immigration

The Story Behind the “Multiple Surrenders”

The story of the “multiple surrenders“ shows that all is measured from Above, to the last detail. The Ottoman Empire ruled the Holy Land for 400 years — 1516 to 1917. They surrendered four times to the British. It seems that for each century the Muslims ruled, they needed to admit that the Land of Israel does not belong to them. 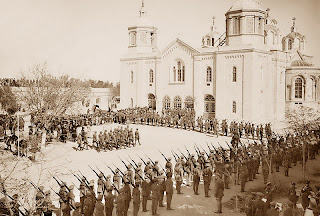 Jerusalem was spared what might have been a bloody and destructive battle for, as the British army approached, advancing along the Jaffa- Jerusalem Highway on the night between Dec. 8 and 9, 1917, the Ottoman army withdrew. Hussein Salim al-Husseini, the mayor of Jerusalem, went out to meet the British in order to formally surrender. He met up with a couple of British kitchen sergeants near Shaare Zedek Hospital, at what was then the sparsely populated western outskirts of Jerusalem. As he was unfamiliar with British military rank, he surrendered to them.

Their commanding officer was most disgruntled over this surrender, and demanded a second surrender ceremony in which he, the officer, would be the personage in charge, on the same unsheltered hill. A yet higher officer was even more peeved and demanded a third ceremony at the same windy spot, with himself in the limelight. 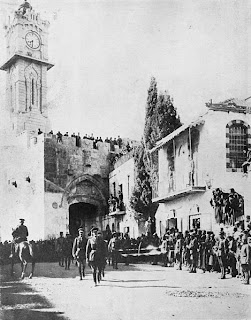 Then Field Marshal Allenby insisted on, still a fourth and final surrender ceremony, this time held just outside the Jaffa Gate. After the final capitulation, the field marshal ceremoniously entered the Old City walls. Allenby made a point of dismounting and entering on foot, out of respect for the religious significance of Yerushalayim.

The mayor himself was not present at the final surrender. He had stood on the exposed hill in the cold for too
long and contracted pneumonia. Allenby visited him in the hospital. Al-Husseini passed away a few weeks after the British entered Yerushalayim.

Due to these four “surrender ceremonies,” there are two competing days as to the exact date of the Surrender of Jerusalem (Dec. 9 and 11), as well as two competing locations: the hill in Romema where the original ceremony took place, and Kikar Tzahal where Allenby held his ceremony. The above-stated discrepancies still leave physical traces on the map of Yerushalayim.

Published in Hamodia.
Posted by Eretz Yisroel in the Lens at 7:41 PM