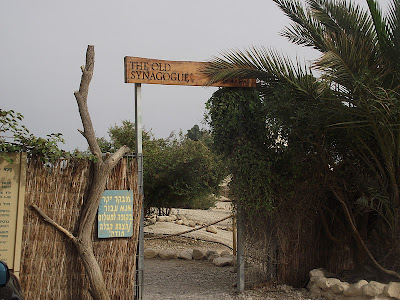 Walking into the shul from the time of the composing of the misnah found in En Gedi one feels the connection of the chain of Jewish generations. Its layout is similar to modern-day synagogues and the way that it faces in the north strengthen our pride in being part of the nation of Klal Yisroel that has held on so fiercely to our religion and tradition throughout the ages. The exquisite En Gedi synagogue opens a window into the beauty of the Jewish soul showing the great love the Jew has for his Maker. Throughout the ages, the Eternal People used their innate talents to decorate their places of worship. thereby fur-filling the verse "Zeh Kailie v'anvay Hue ...”. "This is my G-d and I will build Him a Sanctuary" V'anvay Hue -- and I shall beautify this Sanctuary (Artscroll Siddur).. 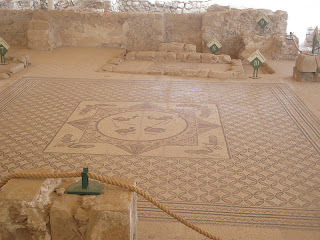 Well-preserved because of the dry desert climate, the detailed colored mosaic floor shows the great effort the builders exerted to create a beautiful house for Hashem.
The absence of human forms testifies to their adherance to Halacha. The mosaic has a leaf pattern with the central medallion in the form of a diamond, while in each of the four corners, pairs of peacocks hold bunches of grapes in their beaks. The decoration opposite the bema includes three seven-branched menorahs. 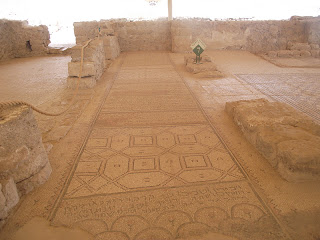 On the side of the floor are four or five attractive inscriptions, but these are not the originals since this part of the floor was taken to the   in . The first eight lines of the long dedication are in Hebrew, while the rest is in Aramaic, the common language during that time. It cites the names of the thirteen fathers of the world stated at the beginning of Divray Ha Yamim Alef: Adam Seth, Enosh, Kenan, Mehalalel, Jared, Enoch, Methuselah, Lamech, Noah, Shem,  Ham and Japheth. Also the Avot are mentioned. “Shalom al Yisrael” ( also found in the synagogue in Jericho) is inscribed. Some local residents are given recognition for helping to pay for the renovation and maintenance of the synagogue.
Included in the inscription is the admonition that people should not cause controversy or slander others to Gentiles. Then comes a mystifying warning and curse that if one should reveal the secret of the town to the Gentiles, he will be removed with all his seed from under the heavens. It has been suggested that this “secret” refers to the manufacture of persimmon perfume. 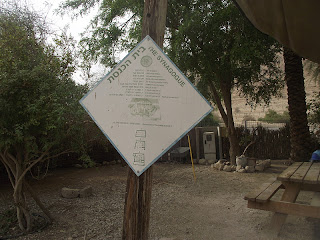 The Jewish community of Ein Gedi was one the wealthiest communities of those times. The excellent weather conditions and abundance of water it the area enabled it to grow persimmon, a plant that was the source of the most expensive fragrance in the ancient world. The was a place suitable for this plant to grow, and it grew in Ein Gedi in thick groves. The resin flowing from the plant was collected and produced a valuable perfume that was renowned for its fragrance. Rashi [B’rachot 43a] says afarsemon grew primarily in the Yericho area and adds that the root of the name Yericho is “reiach” because of the fragrance of afarsemon. [The Gemara discusses the special bracha to be said upon smelling afarsemon oil. See Shulchan Oruch Orach Chayyim 216:4.] Afarsemon is identified as צרי, the first ingredient of the קטורת.

The present-day equivalent or this mysterious plant is not known, researchers have debated for years as to which plant was the real source for this treasure.  They now claim that it is a plant found in Sudan which they intend to grow in the En Gedi Botanical Garden.

The synagogue itself dates to the end of the 3rd Century CE, theTalmudic Age, (late Roman and Byzantine), and was renovated by Ein Gedi inhabitants in the 4th Century and then again, in its present form, in the 5th Century. The north wall facing is the wall where the aron was situated and has two entrances. Near to the north wall a repository was excavated, where sacred writings, scrolls, coins, a bronze cup, and a menorah were found. Next to it is a stepped seat, called the seat of Moses, which was reserved for the community leader. Against the south wall benches where placed for the public, and an outer staircase on the northwest wall led to a second story balcony 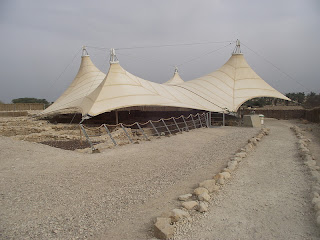 The Jewish settlement and its synagogue were burned down in ca. 530 CE, and signs of this fire were very evident during the excavation.

The Ein Gedi synagogue was discovered accidentally in1965 when the fields where it stood were plowed and the mosaic floor was exposed. The site has only been open since 1997, and it is covered by a huge, protective tent.

Published in the "English Update"
Posted by Eretz Yisroel in the Lens at 4:54 PM