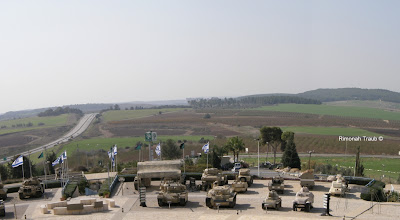 The cornerstone for Yad Lashiryon, the Armored Corps Memorial Site in Latrun, was laid on December l4, 1982. A former police station during the British Mandate, (a Mandate Tegart Fortress) it’s now the site of an archive for fallen soldiers, a library, a tank museum, and a synagogue.

The Israeli artist, Danny Karavan, has converted the tower at the memorial site into the “Tower of Tears” to show the ocean of tears shed over each and every young soldier’s life cut short even before it had a chance to bloom.. The walls of the tower are covered in steel with many mortar holes taken from
actual tanks, giving the feeling of being in a tank .Water, simulating tears, trickles down the walls and flows into a pool, covered by thick glass upon which visitors stand. The pool represents the tears shed by HaShem and stored under His Holy Throne for all Jews killed in battle.
A video shows the photo of each fallen soldier, one by one, with details of his life's history. Computers are available to access more information for each of them.


The  'Wall of Names' is a most painful sight to behold as all the names of our fallen soldiers who were in  the Armored Corps are commemorated on it. On this very long white wall are many hundreds of names starting with those who laid their life down in 1948 till those who were killed most recently. It is our fervent prayer that not even one more name be added to this wall or others like it.


On the top floor of the building is a museum commemorating the Jewish soldiers who fought in various foreign
armies. Included is a tribute to the British Jewish Brigade who fought against the Nazis and helped liberate
the concentration camps. Nearby is an exhibit about the Bielski brothers, partisans who saved many Jews in

World War II by helping them survive in the forests, as they simultaneously sabotaged the German war machine. There are tributes to other Jewish groups or persons who risked their lives in the service of foreign armies.
On this floor is also a room dedicated to missing IDF soldiers. May we be granted to see them back home again, very soon.


Yad Lashiryon also houses one of the largest tank museums in the world with the distinction of having the most diverse collection of tanks. These tanks include Israeli- made tanks, enemy tanks seized in combat, and vehicles purchased specifically for this collection.There are also many other armored fighting vehicles here.

At the back of the building are steps leading to a wooden deck which looks out over the green expanse of Emek Ayalon. It was here that the moon stood still in the times of Yehoshua.
More modern day battles were also fought here. In 1948 the Jordanian legion occupied the police station of Latrun. They were an effective cork that blocked off the way to Jerusalem, not allowing convoys of supplies through to the beleaguered city. Jewish forces decided to attack the Jordanian stronghold on April 24, 1948 in an operation called “Mivtza Bin Nun” after Yehoshua Bin Nun. Since there were not enough forces, they enlisted Holocaust survivors, some of whom were the last remaining members of their families. Tragically, eighty boys were killed in the attack which was meant to happen at night but got delayed until the morning. Five more attacks were launched on Latrun, but it remained in Arab hands until the Six Day War when it was finally captured by the Israeli Defense Forces.


Published in 'The English Update" 9 February 2011 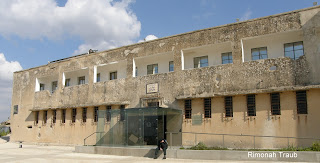 Posted by Eretz Yisroel in the Lens at 12:44 PM