A Tale of Two Gardens© 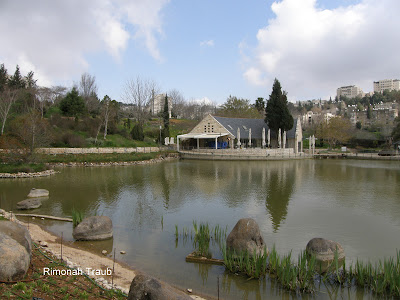 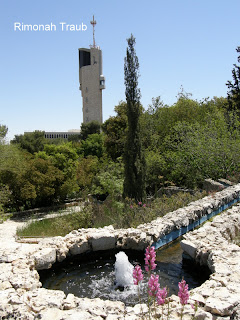 boasts two completely different but both fascinating Botanical Gardens. The first was planted in1931 on a plot of land specifically allocated for that purpose on (Har HaZofim). This tract of land was part of the Grey Hill House Estate which had been purchased by the builders of the in 1914 with funds raised by the Chovevei Tziyon movement.

The land for the botanical gardens had previously belonged to the wealthy English lawyer Sir Grey Hill. In this scenic location, which is actually part of the cemetery on Har HaZeitim, he had built in 1902 a home for his wife Lady Caroline Emily to be used by her as a painting studio. Not wanting their university to be called "Der Toiter (The Dead) University,” the buyers of this estate called it Har HaZofim.

During the 1948 War of Independence,  on   and the nearby remained in Jewish hands although they were unequivocally over the border in . Twice a week a convoy was permitted to travel there. Our soldiers, disguised as policemen would travel in the convoy in order to be able to reach to guard the area. 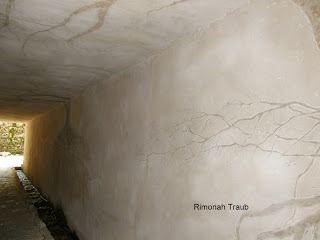 The original sites of   and  were technically under the protection of the United Nations, but despite the "Mount Scopus Agreement," these institutions were not permitted to reopen.  An alternative campus was built in Givat Ram in 1954, and a new botanical garden was planted near there. The 1967 Six Day War, which returned the free accessibility to  to us, enabled the functioning of both gardens.

and the Tomb of Nikanor of 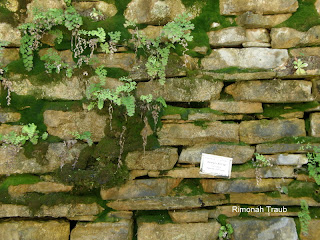 The scenic gardens cover an area of twenty-five dunams, containing 950 plant species. Entrance to the gardens is through a tunnel underpass whose walls feature sketches of trees, by Ran Morin.. A visitor emerges in a lovely enclave with ponds whose rock banks are covered by moss and fern. (The underpass is reached by going into the "central bus depot" of the university and up the steps of this building). If you go through the right hand archway on the stone pathway, you reach the burial site of Nikanor of Alexandria. 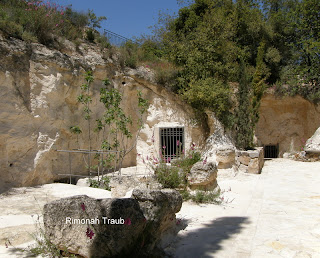 The Gemara relates that Nikanor had beautiful copper gates made in  which he put on a ship with the intention of bringing them to Yerushalayim to donate to the Beis HaMikdash. As the ship sailed on its way, a great storm arose which threatened to capsize the vessel. One of Nikanor's heavy doors was thrown overboard to lighten the ship’s load and help keep it afloat. When the sailors wanted to cast the second door into the waves, Nikanor asked to be bound to it and thrown into the sea with it. But before this second door with Nikanor attached to it could be tossed over the rail, the stormy weather subsided.

When the ship docked in Eretz Yisrael, the first door was found attached to the bottom of the ship. These magnificent doors were used above the fifteen steps leading from the Ezras Nashim to the Ezras Yisrael.

The Mount Scopus Botanical Gardens displays the flora of Eretz Yisrael from in the north to the desert in the south. Each region of the country with its own special vegetation has a section in this botanical wonderland. For example, you find a variety of plants from the Sinai growing among red Sinai rocks. Signs in Hebrew and Latin identify each plant and tree. 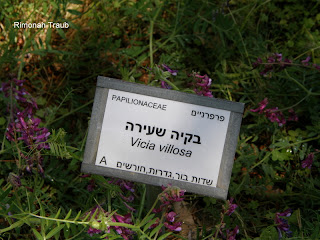 Besides being a collection of many endangered plant specie and uncultivated plants, the Mount Scopus Botanical Gardens is a sanctuary for many animals as well. It was the first home of ’s Biblical Zoo.

At the end of the plant displays are stone benches under a circular stone columned pergola. From here looking eastward, you can enjoy a breathtaking view of the and the Dead Sea, even as far as the Edom Mountain Range in .

Opening Times, Guided , and Transportation to the Gardens on 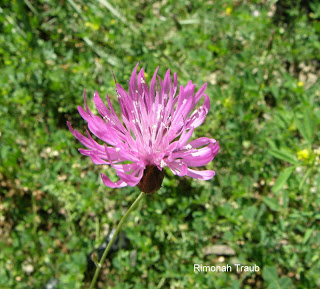 Guided tours can be arranged by phoning 02-588-2596 or 054-882-0118. Teachers can bring their classes for various activities in hands-on garden work and artwork with dried leaves, acorns, etc., and reservations should be made at the above numbers.

Cohamim should check with their Rav about visiting these gardens. By public transportation, take Egged bus lines 4a, 19, 23, 26, 28, and 46. 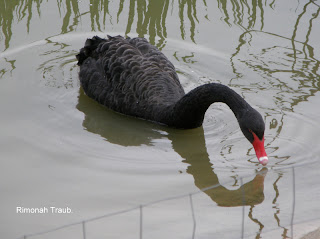 When you walk on rustic pathway surrounded by colorful blooms of the season on either side, you can easily forget that you’re only minutes from the city center of . These botanical gardens on the edge of the Givat Ram campus of feature kaleidoscope arrangements of bright flowers and a lake where you can find black swans floating. 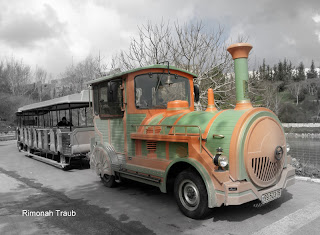 You can either stroll through these verdant gardens on the numerous walkways or ride the slow-moving “flowered” train which travels each hour on the hour. Times for the train ride with its recorded guided tour are from 10 am until 2 pm in the winter and from 10 am until 5 pm in the summertime (phone to verify the train schedule).

Here are displays of over 10,000 varieties of flora, each species marked with its common and its botanical names in both Hebrew and English. The gardens spread out over about 140 dunam of land on a terraced hill. 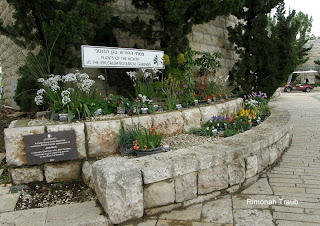 The first exhibit you encounter is “The Plants of the Month” which is a display of potted plants. Slightly higher up, under a stand of English Oaks, is the largest concentrated collection of bonsai trees in the world, containing over 150 specimens. The creation of bonsai trees is an ancient Japanese art which involves planting trees in small trays and containers, then pruning their roots and branches to stunt their growth and turn them into miniatures of large trees.

Species of Trees from Around the World 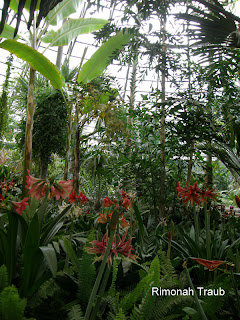 When Hashem created the world, He first made a  miniature of all the geographical regions of the world in Eretz Yisrael. We are also told in Koheles that Shlomo HaMelech planted all the species of trees in the world in Yerushalayim. These ideas are echoed in the botanical gardens with their six out-door sections--  South Africa, Europe, North America, Australia, Asia, and the Mediterranean Coast-- as well as in the beautiful greenhouse designed in three stories to create a microcosm of a tropical rain forest. The gardens even contain a small section for the and one that features Japanese Magnolia trees.

As an ex-South African, I was trilled to travel the train through landscapes designed to look like my land of birth. has 22,000 varying species of vegetation, and some of its different climate zones are replicated here at the JBG. The terrain ranges from that of the Cape-of-Good-Hope's Mediterranean type landscape where protease, the national flower of the country, have been planted in abundance, to the safari lowlands with its summer rainfall and its great big, orange aloes. Next is the which covers 2/3 of  and grows many succulents. Even a native African mud hut has been erected in this section.  Then further on down the path is a lawn grown with South-African buffalo grass.

Burial caves from the Second Temple Era, above which medicinal plant grow, mark the end of the South African area (again, Cohanim should ask their Rav about visiting here). 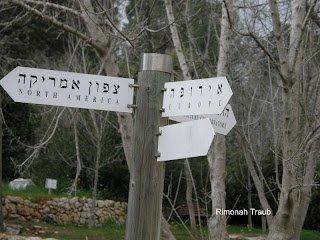 The European section features many deciduous trees that change to autumn colors and then lose their leaves. The North American section displays forest trees, including conifers, firs, pines, redwoods, and sycamores. They have even built an artificial river to
simulate the landscape of northern with an exhibit of Mexican cactus plants.

The Australian section features Eucalyptus trees which are known by their tall, straight trunks. With 700 different species, they can grow to a height of 40 meters. These trees provide many medicinal remedies, as well as being the source of a variety of soaps and cosmetics. The JBG has planted 35 types of Eucalyptus, as well as many other Australian trees such as Grevillea and Acacia. 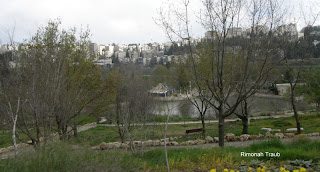 The Asian section contains the "Bible Path" planted with 70 species that scientists have identified as some of the 400 plants mentioned in the Tanach. The vegetation in this section is similar to that of the section. Here we find many different trees, for example Arzay HaLevanon (Ceders) that were used in building the Beis HaMikdash, Carob trees, and Katlav (strawberry tree) with their red trunks. Each plant and tree have signs identifying them and the verses where they appear in the Mekorot.

The JBG also has a special rose garden, a spice and perfume section which contains medicinal plants as wel, and a nursery that sells flowers.

Located in the Nayot neighborhood at 1 Yehuda Burla, the Jerusalem Botanical Gardens is open form Sundays through Thursdays, 8am until sunset. On Fridays, it’s open 8am until 2pm. Every Tuesday afternoon there is a different guided tour of the gardens. The tour has been scheduled until now at 4 pm, but I’m told that it will soon take place at 5 pm. 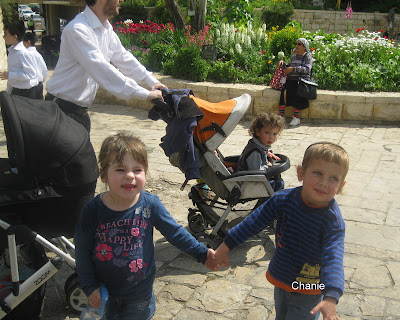 Posted by Eretz Yisroel in the Lens at 7:10 PM

Labels: A Tale of Two Gardens