Glimpse Into the Temple Mount©

Our visit to the Old City of Jerusalem began with a tour of its alleyways and rooftops. As Tzvi, our idealistic guide, led us from Yaffo Gate through the colorful Arab market, he emphasized that we would be visiting the Renewed Jewish Quarter, formerly known as the Muslim Quarter. Here a number of brave Jewish families
have reclaimed and are now living in homes and courtyards that once belonged to the old Jewish yishuv. 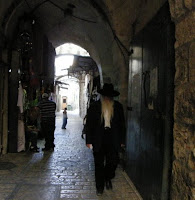 Our group of approximately 40 Bais Yaakov teachers was participating in a monthly tour guide course. On this outing we made sure to stay close together, as Arab faces surrounded us on all sides. So when we saw a young Jewish woman winding her way along the lanes of the Muslim Quarter, we could not help but be impressed by her confidence and courage.

For my sister Rimonah, this outing proved to be a photographer’s paradise. She lagged behind the group, busily taking shots. She arrived home with 249 photographs.

We passed by Yeshivas Aderet Eliyahu, commonly referred to as “'Zilberman’s,” which is located
between the Jewish and Muslim quarters of the Old City. The group reached the former home of Rav David Ben Shimon, (Rav HaDevash), the Moroccan leader in the mid-nineteenth century. His courtyard complex in the midst of the Muslim Quarter is one of the reclaimed sites, and a few families live there. Our guide told us about
the Rav who established the second colony beyond the walls, Machane Yisrael, in 1868.

Balcony of Yeshivas Ateres Yerushalayim
We were surprised to see a balcony over the busy Arab thoroughfare flying Israeli flags. This was Yeshivas Ateres Yerushalayim, housed in the century-old building of the Toras
Chaim Yeshivah. Generations of Torah greats such as Rav Tzvi Pesach Frank, Rav Aryeh Levin, Rav Tzvi Yehudah Kook, Rav Yitzchak HaLevy Herzog and, ybl”c, Harav Yosef Shalom Elyashiv learned here.The building was built in 1886 by Rav Yitzchak Winongrad of Poland. At its peak, 300 students from all over the world studied in the
yeshivah.

The early nineteenth century saw a large influx of immigration from European and Muslim countries to Eretz Yisrael. Olim went to either Jerusalem, Tzefas
or Teveria. After an earthquake destroyed both Tzefas and Teveria in 1837, most newcomers
settled in Jerusalem. By the mid nineteenth century, the Jewish Quarter of the Old City was literally
bursting at the seams.The living conditions were appalling; the lack of proper sanitation and 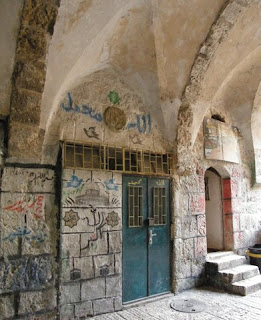 overcrowding were life-threatening, and many epidemics broke out. Due to the acute housing
problem, community leaders made plans to expand beyond
the city walls. They bought land in the surrounding countryside
in 1845. But this activity came to an abrupt halt when, later that
same year, the Sultan forbade foreign residents to buy land outside of the Old City.The plan was put in deep freeze for 17 years.

In desperation, people started buying property and moving into the Muslim Quarter and other sections of the Old City. Many hundreds of courtyards and homes were bought in the Muslim Quarter, among them Chatzer Rav Diskin, Kollel Galicia, Midrash Haagunah and Shomrei Hachomot.

Rav Benzion Yadler (1871- 1962), the Maggid of Jerusalem, grew up in the Muslim Quarter. In his book Betuv Yerushalayim, he describes the 22 shuls and four yeshivos that were in the area before the end of the nineteenth century.

Prior to World War II, there were three major Arab riots in 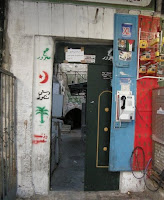 Jerusalem (in 1920, 1929 and 1936). During each pogrom Jews were massacred and their possessions plundered.The Jewish population in the Muslim Quarter slowly dwindled, as many residents sought a safer haven. After
the 1936 pogrom, the British high command claimed they could not protect the Jews in this quarter, and expelled those Jews who had not been killed by their Arab neighbors. While the Arabs proceeded to move into the abandoned
buildings, a Jewish presence remained in the Muslim Quarter, as many Jews returned after the evacuation. Two sisters in our group showed us the home
in the Muslim Quarter where they had been born; it is near what is known as the “Arik Sharon House.” Another woman remembered visiting her maternal great-grandmother who lived in the Jewish Quarter before1948.

After 1967 Jews tried to reclaim their homes, many of which still showed telltale signs of the mezuzos that once graced 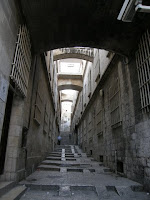 them. The Jerusalem Jews used to carve a hollow in the stone doorpost and place the mezuzos inside. Even though the Arabs had torn the mezuzos out of the doorposts, the gaping holes still remained. Unfortunately, once the Arabs realized that these former mezuzah holes gave them away, they cemented them up.

Many Jews had legal deeds to their property and tried everything to regain it. Some took legal action, while others tried paying the squatting Arabs to leave.
The Ateret Cohanim organization (The Jerusalem Reclamation Project), an auxiliary to Yeshivat Ateret Yerushalayim, sponsors numerous initiatives to purchase, or “reclaim,” properties in eastern Jerusalem for Jewish residency. Stone by stone, another house, another courtyard, Ateret Cohanim is silently transforming the Old City into what they hope will become the pride of Jews everywhere. To date, about 65 Jewish families live in the Muslim Quarter. Counting the yeshivah boys, there are about 950 Jewish                           residents in the Rova HaYehudi Hamitchadesh.

Beit Hatsalam was a rare find bought in a most unusual way. About 13 years ago, a government official seeking publicity arranged to tour the Old City with Mati Dan, the head of Ateret Cohanim. Dan hired a
Jewish photographer who lived in the Old City to document the event, but when he called to make final arrangements, he dialed the wrong number and an Arab answered the phone, asking,
“What do you want, please?”
Without pausing, Dan replied, “I want to buy your home.”
So negotiations began. The Arab said he would sell his Jerusalem courtyard if he were guaranteed a job and a home overseas. A job and a home were granteed and the family were spirited away in the dead of night. The name “Beit Hatsalam” was given to commemorate the hashgachah pratis that led to its purchase.

What is seen of the Kosel is but small section of the retaining walls around the Har Habayis. If one goes into the Kosel tunnels one can see a much larger segment of the Wall. Our group went into an Arab courtyard where a section of the Wall in the tunnels is visible above the ground. This is called the Kosel Hakatan (The
Small Kosel).

At the side of the courtyard we entered there is a large green gate manned by policemen. This gate is called the “Iron Gate” and is built on part of the retaining wall around the Har Habayis. Through the open gate, we
caught a glimpse of Har Habayis. The heart bleeds at beholding the makom Hamikdash in such desolation.

Our tour ended in the Jewish Quarter, in the beautiful home of the Lapidot family. On their spectacular roof garden, Rav Lapidot gave a shiur in which he focused on the importance of Jerusalem.
We, for our part, are praying for the day when Yerushalayim will be the focus of the entire world, and this long, agonizing galus will be over. The Beis Hamikdash will stand in all its magnificence and splendor on
Har Habayis. “On that Day Hashem will be One, and His Name will be One.”

Posted by Eretz Yisroel in the Lens at 9:54 PM

Labels: Glimpse Into the Temple Mount