A Flourishing Riverbank Even in Summer© 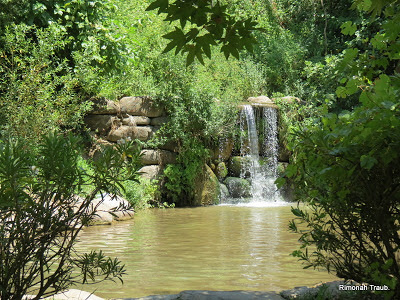 A Tributary of the

The Snir (Hatzbani) Stream Nature Reserve in the Golan boasts year-round strongly flowing water. There’s an impressive array of vegetation on its shady riverbank, and even at the height of the summer months, blooming plants line the trails in the nature reserve. Visitors are treated to a glorious natural landscape and pastoral atmosphere along these few kilometers of the Snir Stream inside Eretz Yisrael. 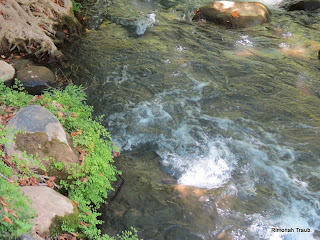 The Snir, also known as the Hatzbani, one of the three major tributaries of the , flows for about 60 to and begins far to the north. Only a small part of it is in the rest being in so called Lebanese territory. The stream’s Arabic name, Hatzbani, is the identical name of the area from which it comes in . In , the river was given the Hebrew name Snir.

The border between the British and the French mandates was set by the Newcamp-Poulet commission in 1922. south of the Ghajar bridge the border crossed the Hatzbani. This is one kilometer north of the reserve. In 1964, the prolonged “ over Water” broke out between Israeli and Syrian forces over Syrian efforts to divert the waters of the Hatzbani and Banyas rivers away from . That led to years of IDF action until the Syrians and Lebanese gave up the idea. 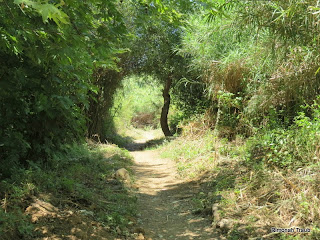 During the Six Day War, another four kilometers of the east bank (Syrian) became Israeli territory, while the western bank as before remained in Lebanese hands. In 1978, temporarily took over the western (Lebanese) side of the stream. In May 2000, evacuated that area, but remained on the eastern side.

In 2001, announced a plan to install a new pipeline to the river and divert approximately of drinking water from the to five villages nearby. Then prime minister Ariel Sharon warned that diversion of the river’s waters would be viewed as a “pretext for war.” More recently, construction of a large tourism center on the Lebanese side of the river, not far from the Israeli town of Metulla has caused concern as it may be used to divert water from the Hatzbani.

An annual average of 130 million cubic meters of water pass through the Snir – one-fourth of the Jordan River's water (another quarter is supplied by the , the Banias, and half comes from the Dan). Waterscapes in general and the Snir Stream, in particular, change often. The differences between the flooding in winter and the low stream in fall are enormous. There is also a marked variation between July and August in terms of the water's level, the power of its flow, and its temperature.  No less amazing are the differences in water levels between one year and another. 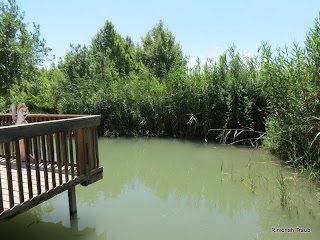 Since the reserve was created, thousands have enjoyed the tranquil beauty of the area. There are three trails of varying length.

1. The Short Trail:
This is a circular route suitable for wheelchairs and baby carriages, beginning at the parking area and following a water channel along which natural growth flourishes and blooms even in summer. After a ten minute walk, you come to a lovely waterfall that feeds wading pools in the comfortable shade. The trail then continues via another path back to the parking area. For those who are capable, they should continue two more minutes down a few steps on the intermediate trail to the stream, and then return to the short trail.

2. The Intermediate Trail:
Also a circular route, this trail takes about 30 minutes to hike. At times, it’s a bit challenging, but in general, it’s suitable for children six years of age and older. This lovely trail promises adventure and fun, and you’ll be getting your feet wet to the ankles as you walk on boulders, climb small rock steps, and walk over a tangle of tree roots. Follow the short trail to the wading pool, then continue straight ahead, following the directions of the signs.

Taking the comfortable flight of steps down to the Snir Stream, you reach the point where the northern Dan Tributary meets the Snir Stream. The chilly waters of the are 17 degrees Centigrade even in the summer, while the Snir water is a warm 22 degrees. Try putting one foot in the Dan channel and one in the Snir Stream, and you’ll notice the difference!

As you go along, you’ll see the rich streamside vegetation and an island in the stream. The Snir flows to the right of the island and the Dan flows to its left. The trail passes a small waterfall that nourishes a flourishing stand of maidenhair ferns.

A high wall composed of round basalt boulders glued together with travertine (limestone deposits), rises near the trail. On examining the rocks, you will see (among other things) fossil-like impressions of fig leaves, entwined roots of oriental plane trees, and the shapes of roots and reeds.

An extra ten minutes' walking will bring you to the steps that lead back up to the plateau from were you can head over to the parking area.

3. The Long Trail:
At a leisurely pace, this route takes about an hour and a half, and it’s delineated by orange, blue, and white trail markers. You start out on the intermediate trail but then continue down stream. It is worthwhile to look behind you at the frothing rapids, from time to time along the way. After about 15 minutes down this segment of the trail, you reach the waterfall. 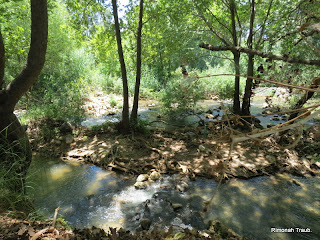 Right on the edge of the stream, you'll find a flat travertine rock which is a good place to rest and observe how the rapids flow over the rocks, changing from minute to minute. The trail is both sun-drenched and shaded in turns before you reach the pool.

This is the end of the long trail. To return to your car, walk to the
left, following the sign to a dirt road that serves as a bike trail. You need a hat here as this part of the trail is in full sunlight.

The varied plant life along the stream banks grows vigorously, exemplifying the verse in Tehillim 1:3: "Like a tree planted by streams of water that yields its fruit in season …” One time after a fire, the reeds and vines grew at the astounding rate of ten centimeters a day. 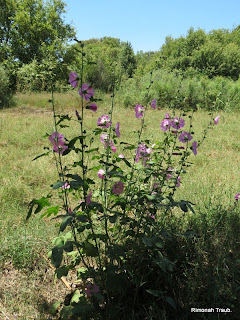 The plants also excel in the beauty of their blooms and their resistance to flooding.

Besides ten diverse kinds of indigenous trees, another eight domesticated tree-species grow in the reserve. There are also ten species of shrubs and three species of reeds. In the tangle along the stream’s bank, you’ll find growing ten species of vines. Two of the vines produce edible fruits; they are the common grape vine (Vitis vinifera), and the holy bramble (Rubus sanctus). But beware of the latter’s hazard hooked thorns.

All around are an a abundance of willows (Salix spp.) or aravot with elongated leaves, and seeds that are wind-born with the help of a light cotton-like material that changes later into a white-transparent layer. The entire ground is often covered with threads of salix seeds, and the air also fills with them. This fruit contains soft fibers, which are the petilat ha’idan (wicks of bast), which the Mishnah (Shabbos 2:1) says may not be used as wicks on Shabbos. Sometimes the tree’s expansive root system is exposed at points where the soil has eroded in flooding. At the water line the red roots which have been laid bare can clearly be seen.

The most widespread species of reed on the trail is the giant reed (Arundo donax), recognizable by its thick stalks and closely packed inflorescence, as opposed to the more diverted inflorescence of its relative, the common reed (Phragmites australis). Seeking the light, the reeds climb up through the thick vegetation, sometimes reaching as high as . The most attractive of all reeds is the sugar cane (Saccharum spp.). Its inflorescence gleams like silk.

The Greek silk-vine (Periploca graeca), a species that grows in Israel only around the Hermon and Snir streams, sometimes appears like a woven rope as its stalks wind and weave together as they grow. When the plant is crushed, it gives off a milky liquid containing glycoside, a substance known to increase the heart rate. Its beautiful, strange fruits look like two horns that form a ring. 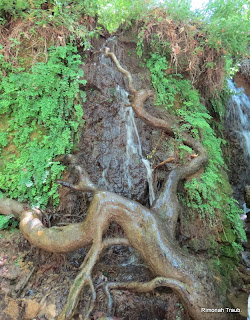 There are ferns that look like little pine saplings called horsetail (Equisetum spp.), and Sarot Shulamit (Southern maidenhair fern - Adiantum capillusveneris) is another fern that can be seen clinging to the river bank.

Fauna
Most of the large mammals living along the stream banks are active mainly at night, and so they are usually invisible to daytime visitors during the hours when the reserve is open. Even so, care must be taken not to disturb them as you walk along. Wild boars signal their presence with the remains of hair and masticated food. Otters and jungle cats leave only their footprints and droppings, while Indian crested porcupines put down their quills.

From time to time, an Egyptian mongoose may be spotted. This animal has a slender body with a pointed snout and small ears. It has 35–40 teeth, used for shearing meat. Its long, coarse fur ranges in color from grey to reddish brown and has brown or yellow flecks. Its tail has a black tip. The hind feet and a small area around the eyes are furless.

Kingfishers, egrets, and loads of songbirds nest along the banks feeding on the flora and fauna. The noisy white-breasted kingfisher feeds mainly on the land crabs that can be seen on the ground at the edge of the water

An entire ecosystem is found in the water, from algae to single-cell animals that form the basis of the food chain. There are many species of fish, the most common being barbels. 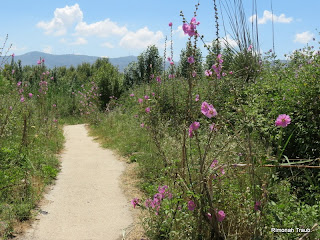 Most visible to the visitor are the smaller creatures: the amphibians, and the dragonflies. The latter fly over the water and stand on protruding twigs; they look like long glowing sticks with large, colorful transparent wings. They can often be seen during their "bridal" flight, with their bodies oddly twisted.

A similar species to the dragonfly, the damselfly is very common in the and the Golan.  It is found only in and and nowhere else in the world.  Particularly outstanding for its metallic hues, the male comes in shades of blue and the female is green. One difference between the damselfly and dragonfly is that the damselfly rest their wings together, on both sides of their bodies. Dragonflies, however have wings that spread apart, even while resting.

If you look closely at the leaves of the holy bramble, you’ll notice they have been bored through in a lacey design. The chrysomelid, a small species of metallic green beetle, can be "blamed" for this charming detail.

From Road 90, north of Kiryat Shemona, turn right at Road 99. Follow it for , and then turn north at the Hagoshrim Junction. Follow the signs for about one kilometer through the orchards. The entrance to the Nahal Snir (Snir Stream or Hatzbani Stream) Nature Reserve is near the kibbutz of HaGoshrim.
Posted by Eretz Yisroel in the Lens at 1:52 PM