Nachal Zohar and Its Glorious Fortress© 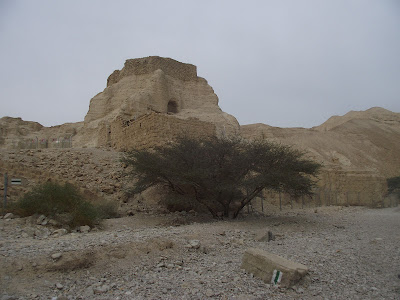 After Route 90 passes the Yam Hamelach hotels the southern end of the Dead Sea — and just before it turns down to continue following the rim of the Dead Sea — is the gas station and restaurant of the Neve Zohar junction. Opposite the junction, turning right off Route 90, lies a dirt road whose signpost lists a number of different sites that have Zohar in their name.

This is the Nachal Zohar route that leads to Meitzad Zohar. If the recent heavy rains have not affected the
ground too much, one can travel all the way in a hardy vehicle and reach the Meitzad Zohar fortress. Alternatively, one could walk there from the Neve Zohar junction or from the road to Arad above the Nachal Zohar route, from where there is an observation point. Either direction provides glorious views and
spectacular sights. (The hiking option is recommended only if you have sturdy walking shoes and are up to the challenge.) 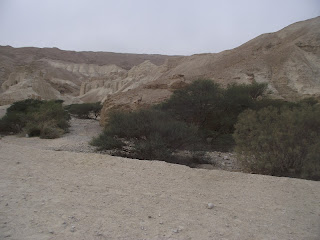 The hike will take you through a lovely canyon in which acacia trees are prominent in the landscape. Atzei shittim (acacia wood) is referred to many times in Tanach. Chazal say that when Yaakov Avinu went down to Mitzrayim, he took brought such trees from Eretz Yisrael to be planted in Egypt, so that when his children would leave hundreds of years later, they would be able to take along the wood from which to build the Mishkan and some of its utensils.

The acacia is a low desert tree with an impressive, umbrella-shaped canopy. Several equal-sized branches originate from one point at the soil’s surface. They grow outward symmetrically in all directions, at an angle of 30 degrees from the perpendicular, thus creating an inverted cone. As the acacia grows in places where water is only available at great depths, it uses its deep roots to exploit this water. The height of the tree varies between 1 and 5 meters, according to the amount of water in the area of its roots.

The stones and pebbles in the area feature colors that are wondrous to behold. There are deep-red stones, rust-colored, and even bright pink ones. There are totally black and totally white rocks, and others of different shades of yellow — from a deep mustard and gold to a light yolk color. There are also those that contain a mixture of shades and colors.

The graceful ibex is found in Nachal Zohar. Ibex are mentioned in Tanach many times by the name “yael.” For example, Tehillim 104:18 shows us that Hashem creates a perfect setting to suit each species and cites the yael’s habitat. In Shir Hashirim (2), Shlomo Hamelech uses the swift leaping of the ibex as a metaphor for how swiftly Hashem redeemed us from Egypt and will redeem us again, may it be, in our times. 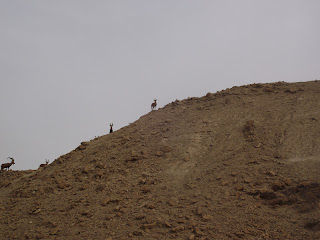 Ibex inhabit cliffs and steep mountains that are cut by deep wadis, which have water sources nearby and abundant vegetation, particularly acacias. These animals are famed for their ability to climb steep hills that provide them with refuge from predators. An interesting behavioral pattern was observed in groups of ibex in the Negev Desert area. All the young were placed on a steep cliff which they were unable to leave. From time to time, the mothers would come to feed them. The offspring would leave this special “nursery” only when they grew and were old enough to fend for themselves. This is how the ibex protect their young from predators such as wolves and leopards.

For many years, the Judean Desert ibex were in peril of annihilation due to hunting. In 1955, they were placed under the Wildlife Protection Law. Today they are out of danger of extinction, but visitors to the area
should take care not to leave plastic bags containing garbage, for if the ibex eat these it could cause their death. 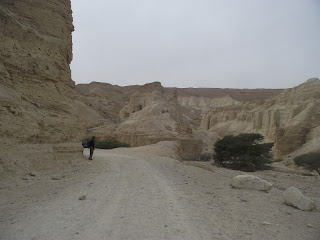 Meitzad Zohar (Glorious Stronghold) was a fort built by the Romans or Byzantines to guard the way and collect the appropriate taxes from travelers along the route. The Nachal Zohar route was used from the times of the First Temple to carry products from the Dead Sea to ports on the Mediterranean coast: Jaffa, Gaza and Ashkelon. Salt, asphalt, balsam and dates were among the products transported. Some say that Meitzad Zohar mbelonged to the Nabataeas, an ancient people residing in the Jordan Valley. According to Josephus, they are descended from the eldest of Yishmael’s 12 sons, Nevoyus, who was the father-in-law of Esav.

The fortress clings to a brownish mound above the nachal achzav of Nachal Zohar, which flows into the
Dead Sea. A nachal achzav is a river canyon that usually has no water. Often it is a valley or ravine bounded by relatively steep banks, but which in the rainy season can suddenly become a watercourse. Therefore, be sure to check weather reports for the possibility of flash floods before setting out to explore the region. 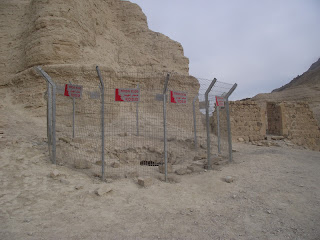 Being that it is in a desert, the inhabitants of the citadel built an elaborate water system collecting every treasured raindrop. Seen to the side of the fortress is a deep water pit that stored the precious liquid, and is now surrounded with modern-day fencing.

Bring along comfortable walking shoes, a hat, sunscreen, and a sufficient quantity of water and food

Published in Hamodia
Posted by Eretz Yisroel in the Lens at 3:23 PM