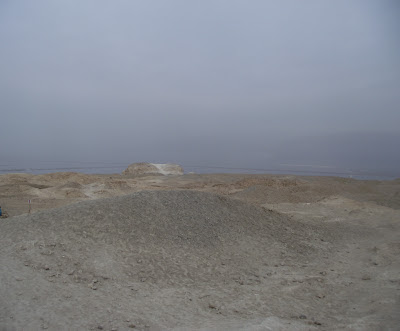 The harsh wilderness of Har Sedom — its land strewn with crumbled rock, craggy hills, coarse sand and intense heat (daytime temperatures reach 130 degrees Fahrenheit) — stand as a monumental lesson to the devastation caused by sin. The Torah tells us that this area was once the lushest and most fertile place in the world, “like G-d’s own garden” (Bereishis 13:10-13), but was transformed into an “eretz melach” (salt land) because of the evil of Sedom’s inhabitants. Even the mountain on which the cities of Sedom stood, was overturned. 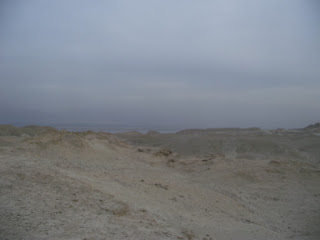 There are many wicked and sinful nations in other lands, yet we do not see them being utterly destroyed and showered with fire and brimstone as Sedom was. (Harav Avigdor Miller, zt”l, explains that Sedom’s inhabitants enjoyed exceptional benefits, which mobligated them to show deeper gratitude to Hashem. But instead of becoming more virtuous, they became arrogant and wicked because of their fortunate circumstances). Being that Sedom was in the Holy land , the land could not tolerate these cities, as it did not want to be defiled by their sins and so they were punished.

The remarkable Mount Sedom is made almost entirely of halite, or rock salt. It is a hill along the southwestern part of the Dead Sea, at the end of Midbar Yehudah. Har Sedom is approximately 5 miles (8 km) long and 3 miles (5 km) wide. It is 742 feet (226 m) above the water level of the Dead Sea, yet still 557 feet (170 m) below “sea level.” 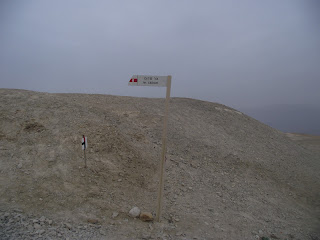 The name of Lot’s wife was Irith (Ado or Edith). As they were fleeing, she began to think about her two married daughters who had remained behind in Sedom. She turned to look back, in the hope that they were following her. Since the malach Gavriel had warned her not to look back, she deserved to die. Irith was turned into a pillar of salt (ibid 19:26) — middah k’negged middah — because she had refused to give a little salt for guests in her home. She had even gone to the neighbors to ask them for salt, thereby informing the inhabitants of Sedom that her husband had brought in guests.

Some say Lot’s wife realized that all their belongings had been destroyed; this upset her greatly and she began to worry how she would be sustained after Lot died. G-d said, “It is not enough she did not ‘salt’ (preserve) her possessions with charity by allowing Lot to bring in guests; now, instead of doing teshuvah, she is worried about her inheritance? Let her become a pillar of salt!” She is destined to remain a pillar of salt till the time of the Resurrection (Yalkut Me’am Lo’ez). 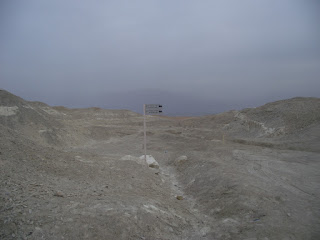 There are a number of columns separated from the mountains that have the shape of a woman, any one of which could be the wife of Lot; there is no definite mesorah on which one she is. Shulchan Aruch (Orach Chaim 218:8) rules that upon seeing the salt statue of Lot’s wife, one should recite two brachos: Baruch Dayan ha’emes on the punishment she got, and Baruch Zocher hatzadikim, recalling that Hashem saved Lot in the merit of Avraham Avinu. (The Sha’ar Tziyun [Orach Chayyim 218:22] notes that the bracha Baruch Dayan ha’emes is recited only when one is pained by the loss [Orach Chayyim 225:9] therefore suggests that  Baruch Dayan ha’emes on seeing Mrs. Lot is not for the punishment of Mrs. Lot, rather bemoaning the fact that the zechut of Avraham Avinu was insufficient to save her [even though she deserved her fate]). But being that we don’t know the exact location, we don’t say the brachah with Shem u’Malchus (Hashem Elokeinu Melech ha’olam).

In his itinerary of his travels, Benjamin of Tudela claims that the Pillar of Salt which Lot’s wife was turned into, is a distance of two parasangs from the Sea of Sedom and the sheep lick it continually, but that afterwards it regains its original shape. 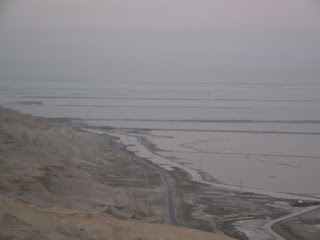 There is little, round hill on Har Sedom called Hakaftor (the Button) because of its round shape, which affords a captivating view of the Dead Sea Works and the seemingly frozen, blue water below. The Dead Sea has been called the Spiegal (mirror) because when it is calm it reflects its surroundings exactly. It is breathtaking to see the reflecting sea with its wonderful play of colors from above as one stands on the Button.

Be forewarned that these white rocks of Har Sedom are unyieldingly bright in the sunlight and magnify the merciless daytime heat, so bring along sunglasses, sunscreen, and a head covering. Bring lots and lots of water; the weather is extremely hot and dry.

Directions:  Take Route 90 south towards Eilat. Turn right, opposite the Dead Sea Works, at a sign saying Har Sedom. It should be noted that while the road is paved until it reaches the edge of Har Sedom, after that point, one needs to travel about 6 kilometers in a hardy vehicle through rough, unpaved terrain, and from there to walk another 1 kilometer to reach the Button. The path is marked with red and black arrows.

Posted by Eretz Yisroel in the Lens at 8:14 PM