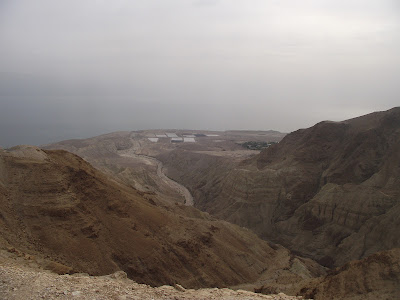 The place we will visit this week offers a majestic view, from the great height of 426 meters (1,400 feet). In reality, though, the location is at zero height above sea level — thus, a contradiction of sorts. For although the observation point is at sea level, the Dead Sea can be seen from here in all its magnificence, way, way
down, below. 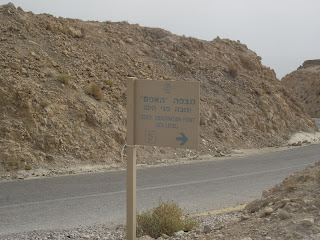 From Zero Observation Point, the Dead Sea below is a sparkling blue-green gemstone set as an edging to the golden-brown crests of Midbar Yehuda in the foreground. On a clear day, the purple hills of Moav are seen behind the Dead Sea. The end of the course of Wadi Dragot (Darjeh), which is a nachal achzav — a
dry river cannon — is seen as it enters the Dead Sea. That location is said to be where the Judean fighters
hid from the Romans during the Bar Kochba revolt.

The Dead Sea is the lowest point (on dry ground) on earth, and for years the water level was 385 m. (1,280 ft.) below sea level. Unfortunately, the sea is getting even lower every year at the rate of 1 meter per year. In the last 40 years it has dropped more than 100 feet and is now 420 m. (1,388 ft.) below sea level. The southern shore (part of which is seen from Tatzpit Efes) has been most affected by the reduction in the sea.

In between the sea and the ascending peaks, Highway 90 — the lowest road on the globe (on its section that runs along the Dead Sea) and the longest Israeli road — can be seen. It runs parallel to the shores of the Dead Sea at 393 m. (1300 ft.) below sea level. When there is flooding from winter rains, the road is blocked in many places. Therefore, be sure to check weather reports for the possibility of flash floods before setting out to explore the region.

Kibbutz Mitzpe Shalem, the lowest  kibbutz in the world, can be seen on the right. Founded in 1970 as a
Nahal settlement, today it no longer belongs to the Kibbutz Movement, as it has undergone privatization.
It is now a “renewed kibbutz” and is considered a cooperative community. It is named after Natan Shalem, who invested in the area of the Judean Desert where the kibbutz is located. Approximately 90 percent of the population — ranging from infancy to age 50 — speaks English. The kibbutz has a Beit Chabad.

The kibbutz’s economy consists of tourism, industry, and agriculture. The tourism includes an organized 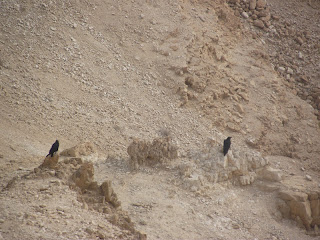 swimming beach, a mineral beach with sulfurenhanced baths from the Dead Sea, and a motel named for the nearby Dragot Cliffs. Its industry is an Ahava factory for refining minerals from the Dead Sea into skin-care products. Mitzpe Shalem’s agriculture consists of a coop for raising turkeys, and an orchard of about 400 dunams of palm trees. Seeing the undulating green palms from above is nothing less than majestic. We can’t wait to see the fulfillment of Yechezkel Hanavi’s prediction that one day fishermen will line the shores of the Dead Sea from Ein Gedi to En-Eglaim. At that time the Dead Sea will be exceedingly abundant in fish, and every manner of food tree will line its banks (47:10-12).

Being a desert, Midbar Yehudah is prone to extremes in temperature — very hot during the day (even in the winter), and temperatures dropping sharply at night. Winter can have some frosty days, with the coldest month most often being January. On average, the month of August is the most scorching. The best way to dress would be to copy the onion: wear layers that can be removed. Also, it cannot be emphasized enough the importance of wearing a hat, preferably with a large brim. The sun is blazing and very bright all year round, except for about eleven days a year, when the sun is clouded over. Comfortable, flat shoes are a must. Bring tons of water.

How to get to Tatzpit Efes: Travel on Highway 90 from Yerushalayim, in the direction of the hotels of the Dead Sea, until an army roadblock is reached. Turn right onto the Metzukei Dragot road, travel up the winding road for about 10 kilometers (6½ miles). Watch carefully, to your left, for the sign saying “Tatzpit Ha’efes — Zero Observation Point — Sea Level” in Hebrew and English. From this point, a five to seven-minute walk will get you to Tatzpit Efes.

It should be noted that the wondrous views of the Dead Sea that were submitted to enter the New Seven
Wonders of the World Contest, were photographed near the beginning of the Metzukei Dragot road.

Our thanks to tour guide Freda Taub for the information in this article.
Published in Hamodia
Posted by Eretz Yisroel in the Lens at 12:59 PM