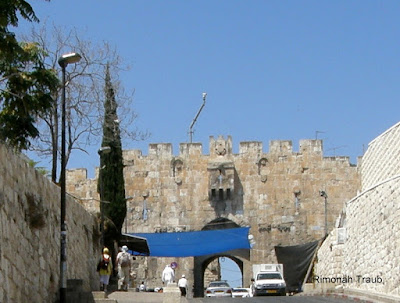 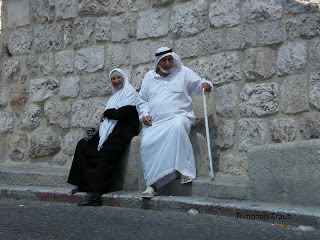 In my mind’s eye, when I remember the miraculous recapture of the Old City and the restoration, through the grace of Hashem, of the Kosel, intoJewish hands during the Six Day War, I see soldiers, paratroopers from the 55th Paratroop Brigade, running into the Old City through Shaar Ha’arayot. An Israeli Sherman tank had gotten stuck in the entrance and blocked it, but this did nothing to deter them: They climbed over the tank and entered the Old City.

Lions Gate, which is located on the east side of the Old City, leads directly into the Muslim Quarter. Standing outside Lions Gate with one’s back to the Old City, one has a magnificent view of the Mount of  Olives and a road to the ancient city of Yericho that is now blocked by the security fence.

Initially the gate had an L-shaped internal structure. This was later removed to provide access for
motor vehicles. 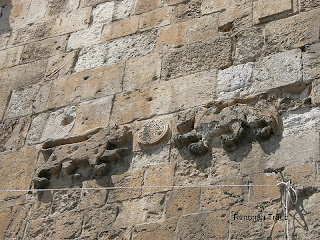 As with all the other gates, this gate has many names, varying in accordance with language and religion.(please look below where Rav Mordechia Y. Scher gives additional names) The name Shaar Ha’arayot, or Lions Gate, is because of a pair of lions carved into the stonework on each side of the gate’s arch that were said to be placed there because of the following tale.

Firstly a bit of History; Until Suleiman the Magnificent the Ottoman sultan built the wall, Yerushalayim had stood without a wall for 308 years. In 1219 C.E., AlMuazzan, Saladin’s nephew, had demolished the walls of Yerushalayim in wake of the threat of the fifth crusade, which had landed in Egypt and was on the way to the Holy City. Only the Citadel of David had remained intact.

Now the tale; After , Suleiman  (1494-1566) became ruler of Yerushalayim in the year 1520, he imposed heavy taxes on its Jewish inhabitants, who were unable to raise the money. He then started having recurring nightmares in which two pairs of vicious lions were about to tear him to pieces. The dream was interpreted as a heavenly warning to the ruler, portending his imminent downfall for wanting to harm the Jews. He was advised that in order to protect himself from harm, he needed to protect the Holy City of Yerushalayim from harm, by building it a wall. 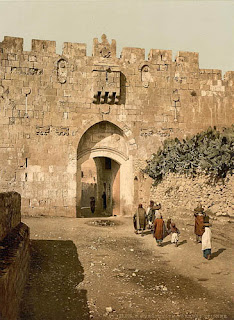 Out of sheer fright, the sultan capitulated and promptly set about rebuilding the city wall in order to protect its citizens. The building of the wall took 15 years to complete (from 1527 till 1542). In order to commemorate his dream, Sultan Suleiman ordered a pair of lions to be engraved on each side of the Lions Gate when the wall was completed. It is to be noted that a lion is considered by many to be the symbol of the city of Yerushalayim.

Some authorities maintain that these “lions” are in fact stone leopards that were taken from one of the structures built by Berbers, and are in secondary use on the façade of the gate. Abu l-Futuh, known as Baibars or Berbers, was a Mameluk sultan of Egypt from 1260 to 1277 who stemmed the seventh crusade
and whose emblem was a pair of felines (possibly cheetahs or leopards). Almost opposite Lions Gate, on Derech Yericho, is Mitzpe Chalelei-Sayeret, erected in honor of Israeli
soldiers who fell from Sayert 75 and Chatewet 80 as the city was being captured in the Six Day War. The
monument is shaped like a bird in flight.

Adjacent to Lions Gate from the outside is a Muslim cemetery.


The Gates of the Old City

The walls of the Old City we see today are those built by Suleiman the Magnificent and have a total of 12 gates. Only eight are unsealed: Shaar Ha’arayot, Shaar Ha’ashpot, Shaar Haburskai, Shaar Tzion, Shaar Yaffo, Ha’shaar Hechadash, Shaar Shechem and Shaar Haperachim.

The Single Gate, Double Gate and Huldah Gates (Triple Gate) are on the southern wall of the Temple Mount and are sealed. Shaar Harachamim is on the eastern wall of Har HaBayis and is also sealed. Until 1887, each
gate was opened at sunrise and closed before sunset.

The current walls of the Old City stretch for almost 4 kilometers (2.5 miles in length)  rise to an average height of 5-15 meters, (16-49 feet), but at some points are 20 meters tall, with a thickness of 3 meters, (10 feet). Altogether, the Old City walls contain 43 surveillance towers.

In 1981, The Jerusalem walls, along with the Old City of Jerusalem, were added to the UNESCO World Heritage Site list.

Rav Mordechia Y. Scher.
As you note, there are other names for the gate and some of them are noteworthy for our tradition. My departed friend and mentor Aharon Bier z"l notes it was called Shaar Binyamin since it was the gate leading out to the territory of Binyamin; Shaar Yericho because the road to Jericho ended at that gate, Shaar Yehoshafat because it opens out into Yehoshafat Valley. It was also know as Shaar HaShevatim, the Gate of the Tribes because all the tribes of Israel arrived here on their way to the Temple Mount. Inside from there, on the northern wall of the Temple Mount, is a gate that the Arabs still call Bab al-Ishbit, or Gate of the Tribes.

Aharon Bier also noted that when the Old City fell in the War of Independence in '48, the captives taken by the Jordanians were led out via Lions Gate. Fittingly, when the paratroopers entered the Old City 19 years later in the Six Day War, it was through the same gate. Those soldiers included the recently departed Hanan Porat, and (may he live long and well) Rav Yisrael Ariel. 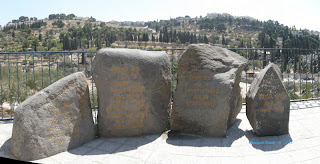 Posted by Eretz Yisroel in the Lens at 3:42 PM