The Ohel Yitzchak Shul of the Old City©

In the early ’70s a friend of mine was taken by her ulpan to the Old City of Yerushalayim. They passed by the 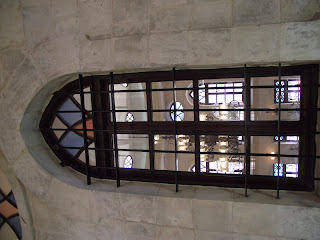 tall remains of the walls of a synagogue with blown-out windows. Her heart contracted in pain when she saw this wanton destruction. Nearly 40 years later she was learning in a course that took place in the Old City. She looked up from the notes she was taking, at a beautiful round window set with colored glass. Recognition dawned on her. These were those same blown-out windows that had so pained her. What joy she felt! Here, before her very eyes, was a symbol of rebirth and redemption.

If one stands in the men’s prayer section at the Kosel, heading out to the back left corner that turns onto Rechov Ha’gai (El-Wad Street), to one’s right is a flight of steps. At the top of these steps, to the left, is the newly restored Ohel Yitzchak shul. The synagogue is a memorial of the magnificent life of the generations that lived in Yerushalayim and preserved the city’s sanctity and purity.

The sanctuary is located about 100 meters from the Temple Mount and was purchased from the Muslim Khaladi family in 1867 by the talmidim of the Chasam Sofer, who arrived in Eretz Yisrael from Hungary in 1862. They established a community called Shomrei Hachomos, meaning “Guardians of the Walls,” and built the shul in the 1870s.

In 1904 as a second story was added to expand the building, the Ottoman authorities warned that the extension would not be allowed. They feared that its roof would end up being taller than the Dome of the Rock. As Turkish law stated that once a building had been erected, it could no longer be demolished, the construction of the roof was completed literally overnight to ensure that the synagogue was complete.

The magnificent shul was on a par with the more famous Tiferes Yisrael and Churvah shuls in the Jewish
Quarter. The complex accommodated a yeshivah on the ground floor called Ohr Meir where, because of its
proximity to Har Habayis, round-the-clock Torah learning took place to “guard” the area. The top floor held two prayer rooms, one for the Chassidim (who davened Nusach Sephard) and one for the Perushim (who
davened in Nusach Ashkenaz). There was a mikveh in the building and a small number of residential apartments.

Even though the Arab riots of 1920 and 1929 disturbed the running of the yeshivah and shul, it continued
functioning. The violent 1936 Arab riots, however, forced them to vacate the premises and relocate outside the Old City to Shomrei Hachomos, near the Meah She’arim area. The building was rented to Arabs until the 1948 Arab-Israeli War.

Aerial photographs from the War of Independence show that the building was intact until then. Yet when the Old City was liberated in 1967, Israeli soldiers found only a shell of a building, as it had been looted and vandalized until it was a ruin. It was one of the approximately 80 shuls and yeshivos destroyed by the Arabs in
their wrath during the 19 years following 1948.

After the Six Day War, an individual named Ben Arza opened the first Jewish store within the walls of the Old
City since 1948, on the ground floor of the Ohel Yitzchak courtyard. The bookstore was called “First in Ancient Zion” and later was known as “Ben Arza.” In the 1990s his widow sold his rights to Friends of Everest (a U.S. nonprofit organization under the direction of Irving and Cherna Moskowitz). Ohel Yitzchak was “acquired” from Kollel Shomrei Hachomos with a written provision that when Moshiach comes, the building will revert to the Hungarian Kollel. The Moskowitz family was quite happy to comply.

In cooperation with the Israel Antiquities Authority (who did the research to find old photographs and drawings of the site), the organization also funded a comprehensive archaeological dig, down to the bedrock beneath Ohel Yitzhak, that uncovered traces of previous civilizations at the site. Remains from the time of the Second Temple up to the rule of the Mamluks were unearthed. Some of the highlights of the dig include a
Second Temple staircase that descends to the Tyropoeon Valley (Valley of the Cheese-Makers) and leading to the so-called Warren’s Gate, the closest entrance to the Holy of Holies.

Pottery from Bayis Sheini and 97 coins dating to the beginning of the 1st century CE were also found. The
Roman period yielded pottery dating to the 2nd and 3rd centuries, and fragments of roof tiles and coins. In sections of a secondary Byzantine Cardo, 16 coins were uncovered. Also unearthed were a plaster floor and a small wall from the early Islamic period, plus a small pool and a building that perhaps served as a shop or 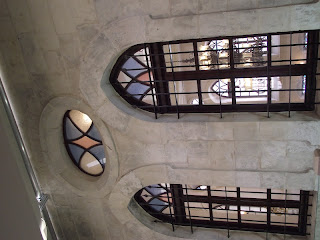 workshop producing or selling leather and fur from the Crusader period. The Mamluk period is represented by a public bath, which occupies the entire site, as well as a changing room. There are remnants of the ovens that produced the steam, and the vents that carried the warm air into the baths. According to Israel Antiquities Authority archaeologist Yuval Baruch, this is the most complete relic of the Mamluk period ever discovered in Jerusalem.

At the time of the dig, Ohel Yitzchak was turned over to the Western Wall Heritage Foundation. The foundation manages and maintains both Ohel Yitzhak and the areas beneath it that the IAA has excavated. Eventually a museum and an educational institute are slated to be opened, showing the archaeological finds. An underground passage is being planned in Jerusalem’s Old City to link the reconstructed Ohel Yitzhak shul in the Muslim Quarter with the Western Wall tunnels in the Jewish Quarter.

In 2008, Ohel Yitzhak’s restoration was completed and the synagogue opened and rededicated, just 80 meters from the Temple Mount, in the Muslim Quarterof Yerushalayim’s Old City.
Published in Hamodia
Posted by Eretz Yisroel in the Lens at 11:45 AM

Labels: The Ohel Yitzchak Shul of the Old City