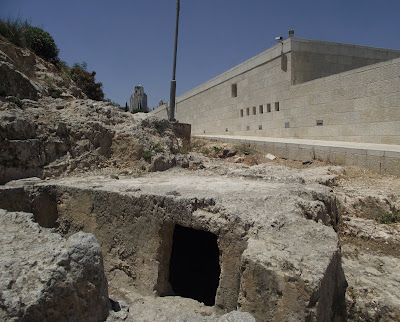 In order to reach the First Temple-era graves locatedon Ketef Hinnom (“shoulder of Hinnom”) one needs to enter the Menachem Begin Heritage Center, located on Rechov Derech Chevron, and go around to the back of the building. 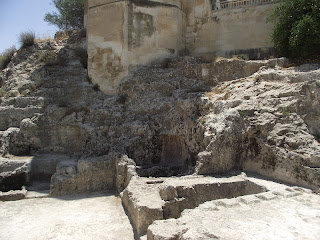 The cemetery comprises a series of rock-hewn burial chambers, carved out of the natural stone of the mountain. In 1979 a team of archaeologists, under the supervision of Gabriel Barkay, professor of archaeology at Bar- Ilan University, found two tiny silver scrolls in one of the burial chambers. The scrolls are inscribed with most of Birkas Kohanim and apparently were both once used as amulets. It is claimed they contain what may be the oldest external surviving text from Tanach, dating back from immediately prior to the destruction of Yerushalayim by the Babylonians in 442 B.C.E. (3338).

On one of the scrolls it says, “May Hashem bless you and guard you; may Hashem make His Countenance
shine upon you; and give you peace.” The words, “and be gracious to you” and “May Hashem lift up His
Countenance to you” are not present; they may have originally appeared and disintegrated with time. The scrolls shed light on our knowledge of the development of the Hebrew alphabet.

Over a thousand objects were discovered in one of the burial caves. These consisted of artifacts of iron and
bronze, including arrowheads, needles and pins. Bone and ivory objects, many small pottery vessels and glass
bottles. Jewelry, including earrings of gold and silver, were also found. 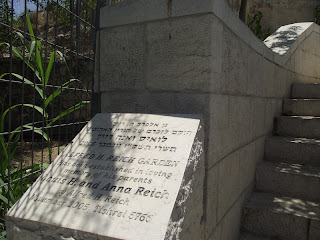 It would seem that the tombs had been in use for a number of generations before the end of the First Temple period, and continued to be used after the first destruction of Yerushalayim. Most of the chambers are neatly cut, with smoothed surfaces, using the royal cubit as a measure. Those chambers that have rough surfaces and a sack-like shape were apparently not intended to be seen. The “headrests” for the laid-out bodies can be seen above the repository chambers.

In the First and Second Temple eras, it was customary to build family tombs. In fact, the most terrible curse that could be given was that one should not be buried with one’s fathers.

Contrary to what has been found in many places from the Second Temple era — that each skeleton was put into an individual casket ordered to fit the remains of the deceased — at the Ketef Hinnom cemetery dating from the First Temple period, the remains were put into a communal repository cave.

In the Tur, (Yoreh De’ah שסג) Rav Hai Gaon was asked if the skeletons of different individuals may be put into a communal repository. He answers that doing so is very bidi’eved. He also proves that it is better to keep each of the skeletons apart and says it’s preferable to move the bodies and bury them at a place further
away so that each one will be separate from the others.

Evidence shows that the Turks stored weapons in these tombs during the Ottoman period. 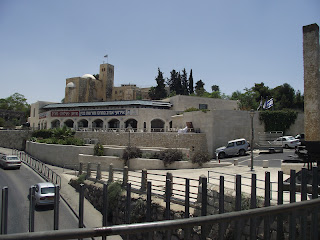 Ketef Hinnom is located just opposite the Old City — to the southwest, across the Chinnom Valley from Mount Zion, behind the Begin Institute. Buses 7, 8, 30, 71 and 72 will bring you to the old train station, which is close by.

Published in Hamodia.
Posted by Eretz Yisroel in the Lens at 10:40 AM