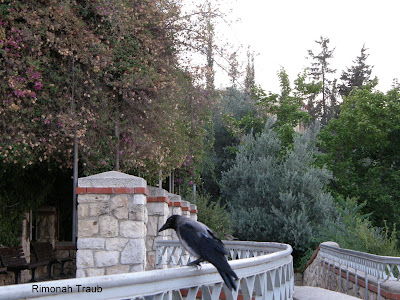 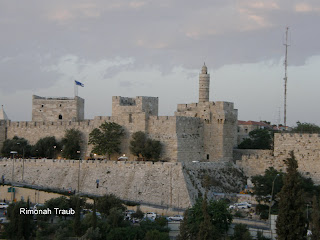 Situated just above Yemin Moshe are beautiful walkways and parks. You can sit on wooden benches in the shade of pergolas thick with scarlet and red-pink bougainvillea bushes and view the walls built by Sultan Suleiman the Magnificent.

had stood without walls for over 300 years when in 1527, under the guidance of a master architect, the Sultan initiated the construction of a wall. The wall is almost four kilometers in circumference and took almost 15 years to complete. In certain places it reaches to a height of over twenty meters with  ramparts that are three meters thick.

Leaving this area through a low pillared gateway, you reach lush, rolling green lawns. With plenty of room for the children to play, this is a perfect place to picnic. Towards the back of the park are what is believed to be the tombs built by King Herod for his family. These tombs are mentioned by Josephus Flavius in his writings. Josephus was hired by the Herodian dynasty to cover up their shortcomings, aggrandize them, and justify their infamous actions. He therefore built up an elaborate, fabricated history. 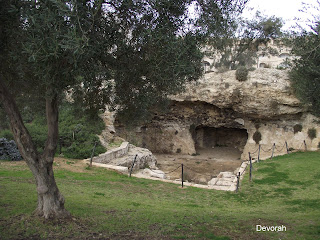 It is claimed that Herod’s wife Marianne and other victims of Herod's violent temper and persecution mania were buried here. According to the account written by Josephus, Herod himself was buried at the Herodion in a royal procession. What is claimed to be Herod's tomb is found on one side of the man-made Herodion hill which resembles in .

In the First and eras, it was customary to build family tombs. In fact the most terrible curse that could be given was that one should not be buried with one’s fathers. The way of burial then was to lay the body on a stone slab in the burial cave. Months later, someone would come into the cave and disassemble the skeleton into bones. The bones were put into a small square casket ordered to fit the longest and widest bones of the deceased. The half of a large round stone- called a golel -   sealed the burial cave and can be viewed here at Herod's family tomb.

During World War Two, the British Mandate used the crypt as an air-raid shelter.
The milk cans that concealed the dynamite which blew up the in 1946 were prepared and hidden in these tombs.

Not far from the Herod’s family tomb stands a magnificent fountain in the middle of the park. For public transportation, take Egged Bus No. 71 and 72 which have stops nearby. 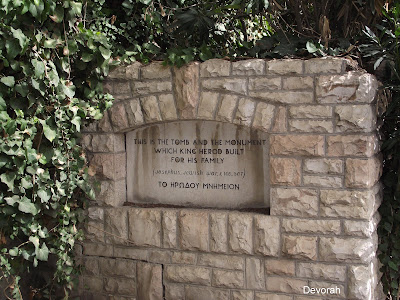 Posted by Eretz Yisroel in the Lens at 7:21 AM