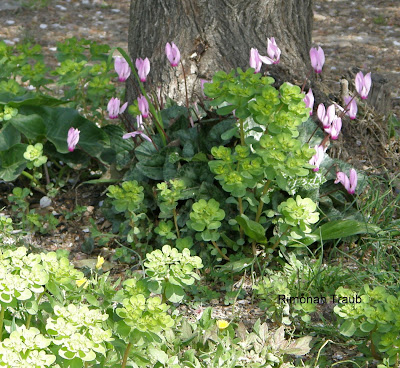 Eretz Yisrael, located at the junction of three continents, is the meeting place of diverse climates and vegetation zones, which bless it in bountiful vegetation. It is home to over 2,500 plants!

Obviously, it would be impossible to discuss them all in one article. We have taken literally hundreds of photos of wildflowers. In honor of Tu BiShevat my sister and I have prepared a little taste for Hamodia readers. We have chosen from our “pre-springand spring” collection. We hope you enjoy it!

Eretz Yisrael is covered by a mantle of flowers and leafy growth from mid-Shevat till about the end of Iyar (usually February to June, depending on the year). This is not to say flowers are lacking at other times of the year. But the abundance of flora in this period turns the country into an enchanted wonderland. Even the most casual observer cannot but be impressed by the colorful floral display. Nature blooms with hundreds of herbs, shrubs, climbers and trees, which contribute their color and fragrance. Some of the vegetation is common and plentiful, whereas other strains are rare and unusual. 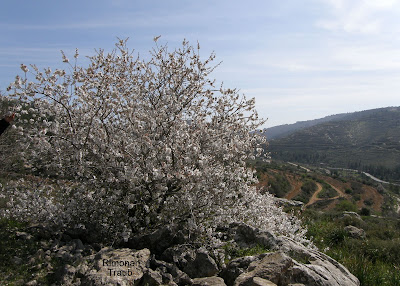 The beginning of the “breaking of winter cold” in the Holy Land is marked by the flowering of the almond — shkeidiah. In fact, there is even a famous Hebrew children’s song to this effect. What a
grand sight — the majestic shkeidiot in bloom, with their delicately scented blossoms of gentle color, dotting the Israeli landscape.
The almond tree and its fruit are mentioned in Tanach by the name of luz, while in Gemara they are called luza.
Onkelos translates the name as luzin. The word shaked means “quick” in Hebrew, indicating that the almond is one of the first summer fruits to ripen. In some species the fruit develops even before the leaves appear. In a different context, Yirmiyahu Hanavi (1:11) saw a branch of an almond tree, signifying that
punishment was imminent. Almond trees have grown in Eretz Yisrael since ancient times. When Yaakov 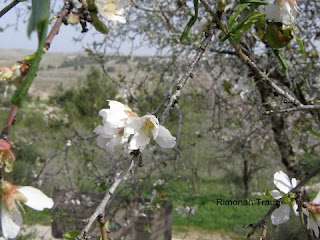 Avinu sent his son Yosef, the viceroy of Egypt, of “the best fruits of the Land,” almonds were also included.(Bereishis 43:11). The Rambam writes that “almonds are the best of fruits.” It is well known that almonds are extremely nutritious and have many medicinal qualities.
The almond motif was part of the divine design for the Menorah (Shemos 25:33-34, 37:19-20). According to some opinions, Moshe was instructed to make the bowls of the Menorah in the shape of almonds. Others say that drawings of almonds were engraved on the bowls. Ibn Ezra says the reference to the almond blossoms in Koheles (12:5) alludes to the whiteness of the hair of old age. Rashi says that the fact that the almond,
which sprouts before any other tree, is mentioned in the passuk is to illustrate old age, which comes and overtakes one all too quickly. 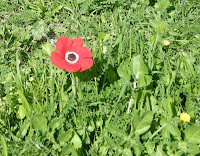 Another of the earliest blooms is the crown anemone known as the kalanit. The most common is bright red. When the British ruled in Palestine (1917-1948) their soldiers wore red berets and were called “kalaniot” by the local Jewish populace. 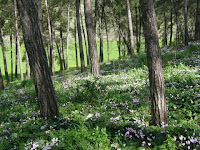 These flowers also come in a variety of colors — white, cream, pink, purple, blue, and others. Generally, the non-red anemones are more common in northern Eretz Yisrael, where they start flowering
in late winter. This photo was taken on Har Hakalaniot, which is part of the Gilboa Mountain in the north. The kalanit  is a perennial common herb of the crowfoot family, whose leaves sprout from the subterranean root. Kalaniot are protected flowers. 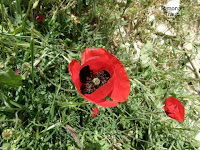 As spring progresses, red beauties that could be mistaken for kalaniot appear. These flowers are in actuality corn poppies, members of the poppy family. They are called pereg in Hebrew and thought to be the prerunner to the cultivated poppy. Many times they create large, sparkling red areas in northern and central Israel. The seeds of this annual herb can remain dormant under the soil for up to 80 years,
without any sign of life. Then suddenly, they will spring into life. How reminiscent of techiyas hameisim! 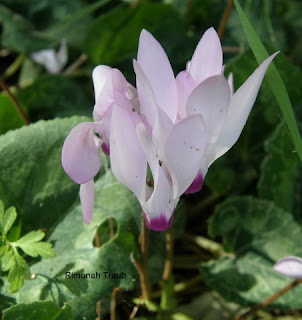 Prolonged in their flowering season, c y c l a m e n s are profuse, beautiful and fragrant, making them highly beloved. Called rakafot in Hebrew, there are different strains growing in our Land. The rakefet mezo’eiah (mezo’eiah means found) has flowers ranging in color from white to deep shockingpink, and heart-shaped leaves. On Mount Meron (the place of the tziyun of Rabi Shimon Bar Yochai) and the Golan Heights, rakefet yavanit, with smaller flowers and round leaves, is found.
After pollination, a rakefet’s flower stem coils downward, allowing its flower head to droop down near to
the ground and shed the ripe seeds into the nearby soil, thereby ensuring the continuation of the species in
abundance. Rakafot are protected wildflowers. 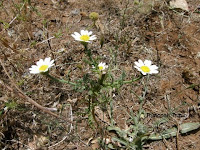 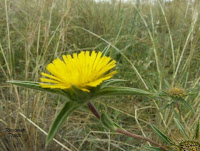 The daisy family (charziot in Hebrew) abounds in Eretz Yisrael. The crown daisy grows in fallow lands and fields and along roadsides in most of Israel. Also presented here are fresh and charming white daisies. When evening falls, the daisy flower bends down to shield its center, in which the seeds develop. 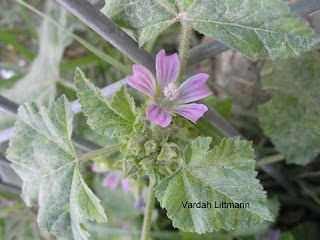 Mallows are edible plants widely used as food for man and beast. In the 1948 War of  Independence, Jerusalem was under siege. As convoys could not get through to the beleaguered city and food and water
were scarce, the common mallow provided food for many of the residents. The leaves were used to prepare salads, fritters and soups. Children would hold contests, competing to see who could collect the most of the of the plants’ bread-like edible fruit.

The flowers of the chalmit are insectpollinated and exhibit distinctive markings on the petals by which the insect is led to the center of the flower. Here the pollen and nectar are stored. This plant is found in abundance all over Israel, especially in places which had been inhabited by man for a long time, as it benefits from the high levels of nitrogen in refuse heaps. 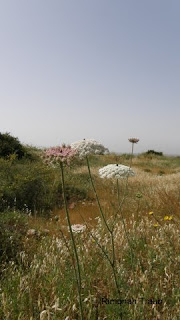 Gezer Haginah — Wild Carrot
There are at least seven species of wild carrot in the country. The ancestor of the garden carrot grows very tall (as seen in the photo). In Hebrew it is called gezer haginah, carrot of the garden. Wild carrots were probably cultivated in ancient Israel. But the common use of carrots as a vegetable 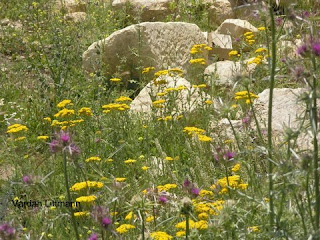 and their present modern form dates from medieval Europe, especially France. The wild carrot grows in profusion all over Israel. The yellow carrot plants were photografted in a field near the kever of Shmuel
Hanavi.
The crown flower is also of the carrot family. It is an annual plant and grows in fields and along the roadside.