The excursion will be tailored and adapted to those visiting in your group and their specific interests. Businessmen, importers and exporters will gain  much knowledge that may be helpful to them in their fields, while children will benefit greatly by learning about sea travel and docking at the port. The Visitors Center is a meeting point meant to bridge the port and its clientele, with the wider public. It opens a window to information about the current activities of the port, highlighting the harbor’s central role in the Israeli economy.

A panoramic film, showing the development of the Ashdod Harbor from its inception till today, is shown. On an enormous glass table, a contour presentation of the entire Ashdod Port is depicted. Tiny models of the huge ships in the glass move around, demonstrating how they are drawn and pushed into the port by smaller vessels. 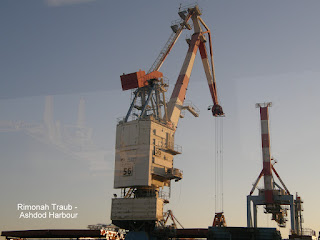 Then visitors are taken on a bus tour of the piers themselves. You will see the ships anchored along the harbor. Among the heavy engineering vehicles seen, the most conspicuous ones are cranes and derricks. Scores of Jib and STS cranes operate in the port. Among them are the highest and broadest cranes in Israel, uploading and unloading huge containers and almost all types and sizes of material. Try to gauge their carrying ability: Jib cranes have a load-lifting capacity of up to 15-25 tons, while Double Jib Cranes lift up to 35-50 tons. Some cranes can haul up to 55 tons.

The state-of-the-art mechanical equipment is controlled by complex systems requiring great expertise and experience. The cranes are maintained by personnel of the port’s Equipment Department, which is staffed by professionals, among them mechanical and electrical engineers, forklift operators, and crane operators.

When observing the many containers sitting on the piers, one sees containers of various colors. Each
shipping company has its own color. Hundreds of vehicles are seen parked in orderly rows, waiting to be
transported to dealerships around Israel that will sell them to the public.

Ashdod is a city on the Mediterranean coast and situated on the historic Via Maris (Highway 4 was developed based on this southern route along the coast), halfway between Tel Aviv and Gaza. Modern
Ashdod was established in 1956 on the sand dunes near the site of the ancient Plishti town. It was declared a city in 1968. Now it is the sixth-largest city in Israel and one of its most important industrial centers. All industrial activities, such as the port area and the industrial zone, are located in northern areas of the city and around the Lachish River.

The building of the port in Ashdod started in April 1965 and began operating on Nov. 21, 1965, with the entry of a Swedish ship Wingland. It was carrying a cargo of sugar. The port now handles about 60 percent of Israel’s port cargo. It is a major point of entry for both cargo and tourists in and out of Israel, as well as imported military equipment. 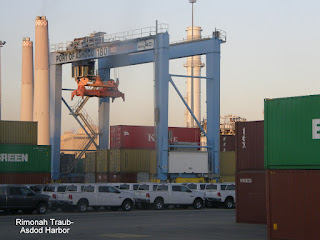 One of the few remaining deepwater ports in the world, the Port of Ashdod was built on the open sea. Breakwaters were created. At the time of its construction, modern shipping concepts of naval transport and port facilities for cargo-handling were just beginning to be used throughout the world. International shipping has undergone quite a revolution since then, due to larger vessels and new cargo-handling concepts based on large consignments of liquid and dry bulk products in containers (containerized cargo), among other innovations.

Based on a long-term development plan, Ashdod’s harbor was planned to be constructed whereby the waterfront would accommodate quays that could be built and developed in stages. This approach helped
the port stay modern, even though over the last 30 years, modern vessels and maritime transport methods
have developed very rapidly.

Initially, quays 1 and 3 were constructed mainly for the handling of citrus and other agricultural exports. Other sections of the port were set aside for future development according to whatever need would arise.

The six conventional piers handle most of the work that includes agricultural exports, citrus fruit, timber, and metals cargo. These piers can handle ships weighing up to 30,000 tons. Pier 5 has been deepened and fitted to work with Panamax-type ships, which weigh up to 60,000 tons in dead weight (weight comprising cargo, fuel, crew, and passengers).

The port’s storage space totals about 500,000 square meters. Of these, 50,000 square meters are covered, for general cargo storage. There is also a special shed for storing hazardous materials, chemicals, etc.

Currently the port is in the midst of a large-scale expansion program. Plans include development of cargo-storage areas, operational and service structures for employees, electrical and communications networks, a modern gate complex, access roads to local and national traffic networks, and an expanded railway terminal. The new central automatic gateway for trucks, which is planned to open shortly, will utilize bio-metrics and other systems for identifying drivers, trucks and containers. Some 32 lanes, equipped with weighing machinery for trucks and camera tracking of trucks, are planned.
Published in "Hamodia".
Posted by Eretz Yisroel in the Lens at 11:47 AM