Take a Trip to the Banias© 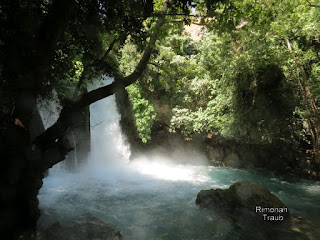 By Vardah Littmann
The beautiful Banias Nature Reserve includes two main areas: the spring area and the waterfall area. And if it’s hard for you to choose between them, then I can help you. Choose both because they are both equally beautiful and fascinating. 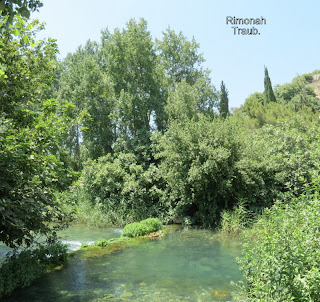 A celebration of water and lush flora awaits the visitor to the Banias. The giant acts like a sponge absorbing the generous rain that falls there. The water then percolates and emerges as three springs at the foot of the mountain. These springs create three streams-- the Dan, Hermon (Banias) and Snir (Hazbani) - which are the headwaters of the .

The streams rush with great force through a canyon-like channel, losing in altitude over the course of three and a half kilometers and forming the Banias waterfall, one of the most beautiful in . After nine kilometers, the meets the Dan River near kibbutz Sde Nechemia and the two flow into the . The Hermon accounts for one-quarter of the ’s waters.
Snow Covered
, Eretz Yisrael's highest mountain is at its border. Different nations, in an attempt to adopt the Hermon as their own, called the giant mountain by names in their own language. The Emorites called it “Snir” which Rashi explains means "snow." In Psalms 133:3 we read of "The dew of the Hermon that flows down on the mountains of ." The dew mentioned here is in essence water, consisting of melted snow.
All winter is covered with snow. When the snow melts, it becomes a forceful river, feeding the and the Kinneret. Thus, the snow-capped Hermon is the water source of the .
One of the three major streams that merge to become the Jordan River is the Nahal Hermon (Banias), with the other two being(as mentioned above) the Dan and the Snir. The major sources of Nahal Hermon's water are the springs that gush forth at the foot of the Banias cave and water from melting snow of .

The volume of the Banias Springs is dependent on how snowy and rainy the winter season was. The Banias stream flows to the west and then turns to the south and is the most eastern of the sources. It supplies 128 - 130 million meter cube water per year, compared to 240M and 152M for the other two sources.  The water of the Banias flows into tranquil still pools that are part of the magnificent .

The Hermon or Banias Nature Reserve was established in 1977 and contains sites of natural and historical interest. Excavations have unearthed an impressive Greco-Roman city and later Byzantine city.  A colonnaded street -the Cardo Maximus - connected both ends of the city. A large public structure, believed to be the , was discovered here, as well as other structures of the period, including streets, aqueducts, courtyards, a synagogue, a Church, and a bathhouse. 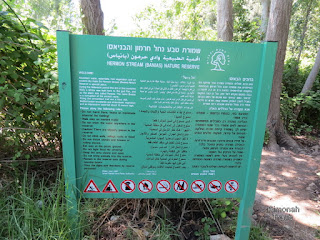 There are four  trails that you can take within the Banias Nature Rreserve, three of them are 45-minutes long and one is 90-minutes long. The Banias can be entered in two separate locations; the Springs and the Falls.

The Banias Springs park entrance contains a parking lot, facilities, and a gift shop. The series of stepped water pools of the Hermon stream can overflow onto the paved walkway in the rainy season.

The Banias Throughout History

The name Banias is actually an Arabic corruption of the word Panias or Paneus – from the name of the Greek god Pan, god of the forests and shepherds whose temple cave can be seen in the ascending hill-side.

It is interesting to note that Banias is associated with idols - Micah's (Israelite period), Pan (Hellenistic period), and the Bleeding Woman (Byzantine period).

It is believed that the Biblical Beth Rehob (the house of the Road) may have been in the Banias.  The Danits stole the Pesel Micah which they then erected in their , perhaps in a cave of the Banias (Judges 18 -  27, 30).

When the Greeks invaded the area, they discovered this beautiful place and the became a center of their pagan activity. In 36 BCE, Panias was given to Cleopatra.  At the end of the first century B.C.E., the Romans annexed the Banias area to Herod`s kingdom. Herod constructed a temple in honor of Augustus. After Herod`s death, his son, Philip the Tetrarch, inherited northern Eretz Yisrael and established the capital of his kingdom near the springs, calling it Caesarea Philippi. The city had a mixed population of pagans and Jews.

In the days of Agrippa II, the grandson of Philip II (53 – 94 CE), the city expanded, and luxurious buildings as well as a large opulent palace were built. Its name was changed to Neronias Caesarea Sebastia (Neronlas) in honor of the Emperor Nero. Jews referred to the city as "Caesarion" ("little Caesar"). At the time of the great rebellion (67-.E.), both Vespasian and Titus were guests in Agrippa II's palace and camped nearby (Josephus Wars).

The city was spared the tragic destiny of other cities, since Agrippa II sided with the Romans. Although its Jewish citizens were protected by Agrippa, they were subject to harsh times. After the war there was a Jewish community in the city, but most of the citizens were pagan. After the death of Agrippa II, the city was attached to the  of  and later included in .

In the 7th Century, the Arabs conquered the land, renaming the city as Banias (Arabs pronounce “p” as “b”), and the city continued the capital city of the Golan area. From documents in the Cairo Geniza we know that there were two Jewish communities residing in the Banias-- one Babylonian and one Jerusalemite. Their synagogue was excavated in the vicinity of the . In 1120 CE, Banias became the headquarters for a messianic sect of Karaites, led by the false Messiah Shlomo HaCohen. Apparently in the year 1126, the community was forced to desert the city, when the extreme Shi’ite sect of Isma'ili Hashishim took over the Banias.

Arriving in the Galilee in 1099 and in Banias at 1129, the Crusaders realized the strategic asset of Banias as a frontier city, located on the trade route to . They built a large wall and gate around the city  The Crusaders fortified the Arab fortress of Kil'at Subeiba (Large Cliff), located 6 km above the city, calling it by the Biblical name - Nimrod Fortress. The Crusaders controlled the city and fortress until 1164 when it was conquered by the Syrian ruler Nur al-Din. 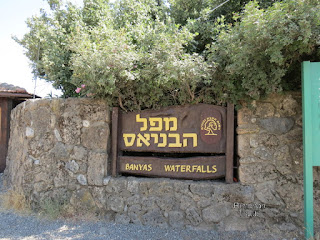 After World War I, the 1920 treaty between the British and the French placed Banias in the French Mandate. On June 10, 1967, Banias was captured by the IDF and was restored to Eretz Yisrael.

After years of planning, the hanging bridge was inaugurated at the Hermon Stream in March, 2010. 80 meters long, the bridge stretches over the strongly flowing clear, almost white stream, while all around it are majestic black/brown basalt and travertine canyon cliffs covered in abundant vegetation. 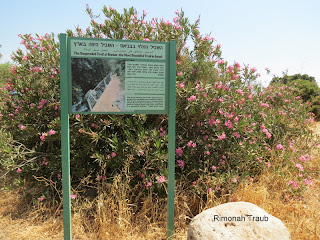 Those who opposed the building of bridge asserted that it would make the  nature reserve into an amusement park. However, this didn’t happen, and the bridge trail blends right into the surroundings and has become an inseparable part of the nature reserve. A visitor who stands on the bridge can observe stunning views that were not accessible before its construction. The views are especially dramatic since visitors are walking in the opposite direction to the water current.

Climbing the steps at the end of the hanging bridge trail, you enter a picturesque rain forest. This more "natural trail," leads to the Banias Waterfall which falls from a height of about ten meters. The lovely viewing-balcony provides the perfect place to observe the waterfall and relish its cool spray. 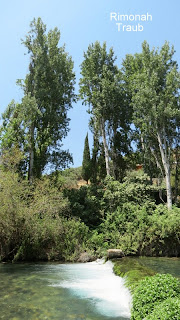 If you bring children with you, show them how to enjoy nature by instructing them to do some or all of the following things. Ask them to touch an exposed tree root and feel the texture of different leaves. (Only beware they don’t touch Oleander with its dark green spear-shaped leaves and beautiful fragrant white or rouse-pink tufty flowers since it’s highly poisonous.) Tell them to watch how the leaves or branches sway in the breeze. Suggest they listen to the sounds of the birds and the leaves. Instruct them in making a bracha on smelling trees or hardy woody stems (boray atzei b'somin), on plants with soft stems (boray isvay b'somim), a mixture of both (boray minay b'somim), or if you are not sure what it is (boray minay b'somim). Or just try closing your eyes with them and concentrating on the sound of the flowing water and chirping birds.

The thick foliage of the woods along the trail contains many species of trees. Among them, you’ll find Common Oaks, Oriental  Plane Trees (easy to recognize, due to their large leaves shaped like the palm of a hand that are shed in the winter and its ball shaped long haired fruit), Syrian ash (can be spotted by its dentate leaflets), Poplar Trees, Willows, Figs, True Laurel (Bay Leaves), Carobs, Almonds, Storax, and many, many more. Among the vine and plant species are grapes and rough bindweed, blackberries, reeds,  ferns and heart shaped ivy. Adding to the great profusion of trees near the streams and stream bank flora are orchard trees such as walnut, lemon, and other fruit trees.

The nature reserve is full of wildlife that lives along and in the streams that stretch over about nine kilometers. From Shir HaShirim's praises of the area (4:8), we learn that lions and leopards once inhabited the region. Lions are now extinct but leopards cam still be found. Jackals and wild boars are active during the night, and in the day many Hyraxes frolic along the shores of the stream since they love the sunlight. There are swamp lynxes and porcupines, field mice, rodents, and bats.

Directions to the Banias Springs and Waterfalls