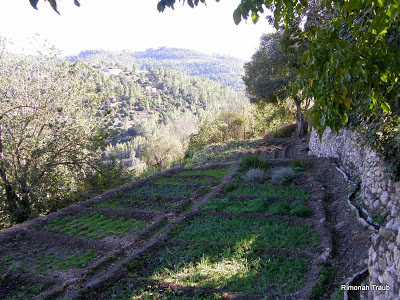 When the Batei Hamikdash were in existence, Yerushalayim was constantly crowded with people. Besides the regular population, there were always many visitors--pilgrims who came for the shalosh regalim or people who brought korbanos all year round. There were also those who came to redeem their ma’aser sheini. Tons of food were required to feed all these people, yet transportation was still undeveloped and therefore food needed to be grown locally. Consequently, the Hills of Yehudah were farmed on the eastern slope of Har Eitan, the Sataf is in the heart of the Harei Yehudah, 20 minutes west of . 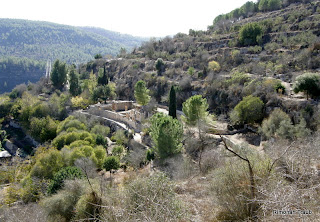 These slopes were cultivated by means of a series of descending terraces. There were two systems of irrigation. The upper terraces, which contained grapevines, pomegranates, olives, figs and various nut trees, depended solely on rain water. This method was called ba’al. As they were dependent on rain-water which is given by HaShem the owner (ba'al) of the rain and the field.  We find that the most common idol-worship at the time was also called Ba’al.  The devotion to the ba’al was the worship of nature, especially the force of rainfall. The great need for rain made the service to the Ba’al very tempting. 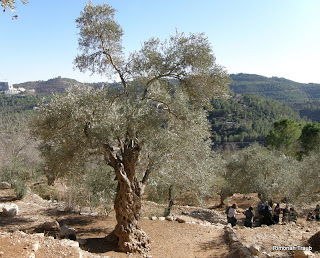 The lower section of the hill where springs were found was used to plant vegetables and legumes that needed more water. This area was watered by the shlachim (furrow) system. The inhabitants used to tunnel into the water-bearing strata, thus enabling them to gather the water in a well. From here amot (furrows) were built to reach the fields and continue to each division of the field.
The amot were lower than the growing plots, and water could not reach them unless the farmer directed it there.  The farmer would remove the main stopper, allowing the water to run into the desired amah which approached the area that needed the water. With his foot he would push out the stones blocking the entrance to this area, allowing a stream of water to run in. When enough water had entered, he would again push the stone with his foot into the stoppage entrance thereby regulating the water supply. The amot were given this name since they were one amah in height and one amah in width (see photo). 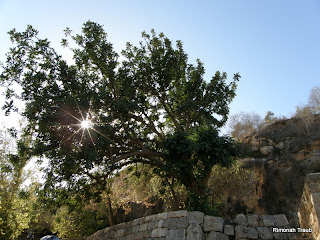 At the Sataf, the ancient agricultural terraces have been renovated and repaired, the storage pools restored, and the irrigation channels redug. Here you can see Biblical hillside agriculture in action. An application has been sent to UNESCO to make this a World Heritage Site, since it is an ecological treasure.
There is an agricultural village on the Sataf grounds run by Gidi Bashan and his wife. Here Mrs. Bashan builds mud constructions, and her husband farms in the agricultural methods that the Cananites and Israelites practiced thousands of years ago. All work is done by hand or farm animals. Lectures and demonstrations of ancient farming methods are held. 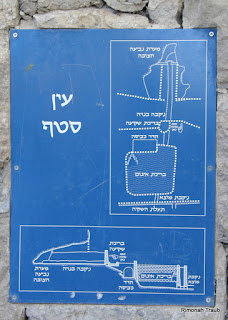 An enormous Mayish tree is growing by the Sataf well. The leaves of the Mayish are asymmetrical, and the Arabs believe that the tree wards off evil spirits. (The Arabs always plant this tree by wells; many have been planted on Har HaBayis.) Ancient walnut trees are also found around the springs.
The Sataf features five different hiking trails of varying difficulty, each indicated by a different color arrow on wooden signposts. They are between two and five kilometers long and are intended for experienced hikers. At the Sataf there are two springs Ein Sataf and Ein Bikura, which flow into the Nachel Sorek. Ruins from several eras of settlement can be seen. The oldest remains on the site are that of an indigenous village with some of the earliest agricultural traces in the region. There are also ruins from a pre-1948 Arab village.
In years past, expectant women experiencing complications near the end of their term were advised by Rav Yisroel Yaakov Fisher, zatzal, to use the remedial qualities of the Sataf springs as a segulah for a safe, normal birth.
To reach the Sataf, take Highway One () to the Harel Interchange (near the Castel), then take Route the direction of Kibbutz Tzuba.
By bus, take the #183 Superbus from opposite Binyanei Ha’umah. The first bus leaves at 7:30 a.m.; an earlier bus can be ordered.
Don't forget to bring comfortable hiking shoes, a hat and lots of water for your hike.

Posted by Eretz Yisroel in the Lens at 5:41 PM