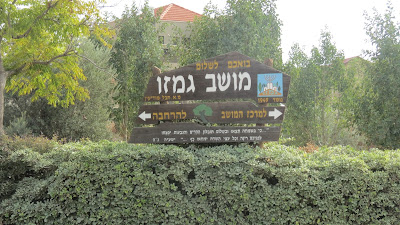 In the early 1970s the Jewish Agency decided it wanted to dismantle Moshav Gimzo. At that point there were only about 20 families living in the place and it was not paying off financially. Rav Avraham Baruch Rosenberger, z”l, the moshav’s Rav, wrote to ask Harav Yoel Teitelbaum, the Satmar Rebbe, z”l,  what to do. The letter the Rebbe wrote back is preserved in the home of the present-day Rav of the moshav, Rav Eliav Meir. Therein the Rebbe stated clearly, “A place in Eretz Yisrael we do not leave.” 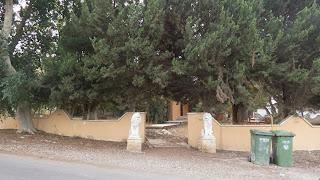 Moshav Gimzo is a place we could all do well to learn from. There are many stripes of frum Yidden — Chassidim, Litvaks, Sephardim, Ashkenazim, Agudistim, Mizrachim, Shas supporters, etc. — all living in harmony and friendship, with mutual love and respect.

The moshav was founded on 11 Adar 5710 (February 28, 1950) by Hungarian chassidim from a group called Etz Chaim, affiliated with the Po’alei Agudas Yisrael Party, on the outskirts of the Ben Shemen Forest. Situated in the western plains at the foot of the Judean Mountains, it is located between Lod and Modi’in at the major crossroad of Route 1 and Route 433, which are both main arteries leading to Jerusalem.

We find Gimzo mentioned in Divrei Hayamim II, 28:18. Here Hashem sent the Philistines to conquer cities of the lowlands and the south of Yehudah, among them Gimzo, as a punishment for King Ahaz who had led Yehudah to disgrace and betrayed Hashem.

Gimzo’s name is thought to derive from the orange/yellow fig-like fruit, “gomez,” of the sycamore (shikmah) tree which was once abundant in this area. In the mishnah in Shvi’is, Rabban Shimon ben Gamliel says in his demarcation of the land for be’ur that “A sign of the plains (lowlands) is sycamore trees.” 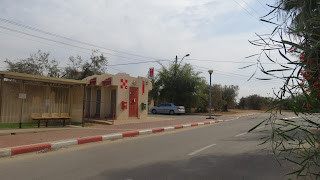 He bases this on the verses from Melachim I, 10:27 and Divrei Hayamim II, 1:15, which tell us that Shlomo Hamelech made cedars in Yerushalayim as plentiful as sycamores in the lowlands. The Tosefta says that at the time Rabban Shimon ben Gamliel gave this definition, the Romans had so devastated the land that the sycamore of the plains were greatly reduced.

The sycamore, the “ficus sycomorus,” belongs to the same family as the fig tree. Its name comes from the Greek sicon (fig) and moros (blackberry bush). The sycamore’s leaves are similar to the blackberry bush and its fruit is similar to the fig. The Navi Amos was a dresser of sycamore trees. This involved slitting the top of each piece of fruit to hasten its ripening and to produce a sweeter, more edible fruit. The process prevented insect infestation.

From Egyptian sources we know that in ancient times the sycamore tree was quite common in the  valley.  was known as “the land where the sycamore tree blooms.” In addition, its fruit was called “fig of Pharaoh.” The Egyptians considered the tree’s shade a delight. With its wood they built coffins for their mummies. In Tehillim we are told how the plague of hail struck the Egyptian sycamore trees. 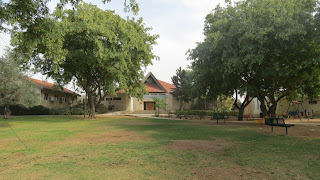 The Gemara in Bava Basra speaks of the sycamore and its extraordinary regenerative powers.
Its branches were used as beams to build homes, but the tree was like a self-producing “factory,” as each time its branch was cut off it would grow a new branch. Even if it was chopped down to the ground, it restored itself and grew new limbs. Sand could cover it completely (branches and all) and it would still survive. Hence its Hebrew name shikmah, which is related to the word shikum meaning rehabilitation.
When a field was sold, it was self-understood, even if not specified, that the shikmah trees and self-grafted carob trees were not included. Yeshayahu (65:21-22) compares the rehabilitation and regeneration of Am Yisrael after years in exile, to a tree that the Midrash (Bereishis Rabbah) identifies as the sycamore.

It is said that the Tanna Nachum Ish Gam-zu lived in Gimzo. He always said “Gam-zu l’tovah”
(This too, is for the best), a play on the name of his hometown. During the Bar Kochva rebellion (in the years 132-135 CE) there was great destruction to the Jewish settlement in the land. The country’s great earthquake of 364 CE caused many Jews to leave the country. The difficult economic and security situation at the time also contributed to the exile.

The  slowly crumbled, losing its hold on the area, and 408 CE saw the end of 500 years of Roman-Byzantine rule. It would seem the Arab  was settled some time during the Ottoman period. The village was east of today’s Moshav Gimzo on the Tel-Gimzo. 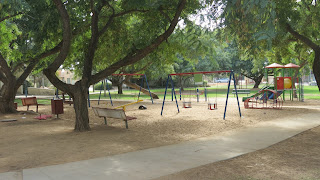 In 1917, the British, under the command of General Edmund Allenby, took control of . As the British 52nd division advanced to  through the , they spent time at Jamzu.

During the 1948 War of Independence, “Operation Dani” was planned to free Lod, Ramla, Latrun and Ramallah, so as to allow supplies up to the besieged . There is mention of Jamzu in these plans. On July 10, 1948, the religious company of the Palmach conquered the settlements of Anabe, Jamzu, Daniel, and Dahariya. These settlements had already been abandoned (except for a few aged or sick villagers).

As Jamzu is a strategic crossroad and gateway to the Judean Hills, the Arab Legion tried (unsuccessfully) to retake it.

In the early 1950s at a meeting in Kfar Saba, Holocaust survivors who were Satmar and Vizhnitz
chassidim decided they wanted to set up a place to be able to farm and keep all the mitzvos of Eretz Yisrael. Moshav Gimzo was the result. In  group of olim from  was settled in the moshav by the Israeli government, to enlarge the population.

The first years were excruciatingly hard. The land was difficult to farm and barely gave any parnassah. Many left. At that point the exchange of letters between the Rav and the Satmar Rebbe, zt”l, mentioned above took place. Then there was an influx of new people. 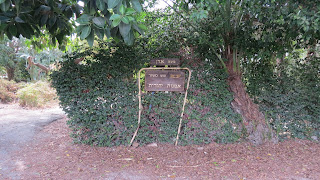 Rav Rosenberger made sure Shabbos and Shemittah were always kept. His chassidishe shtiebel, with all its minhagim still functions today and attracts many in the moshav who are not chassidish to daven there. Many people come specially to spend Shabbos or Chagim to Gimzo.

The moshav has grown substantially, having absorbed new families, and has built a new neighbourhood with housing for Gimzo’s newer generation. Today this beautiful, vibrant, growing moshav has a population of 230 families, and about 1,150 people live there.

The major forms of agriculture in Gimzo are deciduous trees such as peach, citrus, apple, plum, etc., as well as olive trees and vineyards for table grapes and for wine. There are many residents of Gimzo who work outside the moshav in different fields of endeavor. 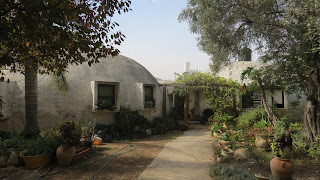 On Moshav Gimzo is a white igloo type of building, surrounded by beautiful gardens. In it is a Judaic art studio — Shesh Moshzar. It was established 20 years ago by Yehudah and Miriam
Aranne. They produce magnificent aron hakodesh covers, Torah mantles, chuppahs, tallis- and tefillin bags, challah covers, bris pillows, wall hangings, kesubos, and general artwork. For more information on their artwork that travels worldwide, and to visit the igloo in Gimzo, call 08-928 5513.
Posted by Eretz Yisroel in the Lens at 5:17 PM