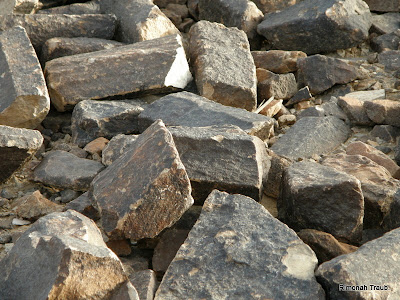 A most fascinating and unique geological phenomenon is found in Machtesh Ramon, in the  (see last week’s column for more information on this area). To someone who has been in a carpentry shop or sawmill, it might seem that spread over the desert sand are pieces of castoff ends of sawed lumber, just like those in a sawmill. 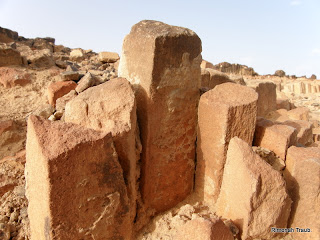 Looking up the low hill that stands above the piles are a number of what appear to be standing logs of wood from which the chips on the ground seem to have been cut. But if you were to bend downand lift an elongated, darkened piece of the “wood,” you would find it very heavy indeed. In reality, you would be holding a piece of sandstone. On top of the hill, there are blocks of exposed sandstone shaped like symmetrical, hexagonal pillars placed in a heap, just like wooden planks in a carpenter’s shop.

The thousands of strewn “woodchips” are actually black prismatic rocks made out of the same kind of sand found on beaches. Haminsara (The Carpentry Shop/Sawmill) is one of the rare places on earth these naturally formed, rectangular and hexagonal prisms of “toasted” stones can be found, and where such a geological sight exists. (A similar phenomenon can be seen in the Meshushim [Hexagons Pool], in the  region.)

It is claimed that these almost-identical stones were created during a volcanic eruption, when volcanic emission penetrated into a sandstone hill and melted (liquefied) the sandstone. The liquid stone then consolidated and crystallized into these long quartzite forms (quartzite is a hard metamorphic rock which originates from sandstone and is created by heat and pressure).

It seems the former sandstone hill was “baked” by heat from inside the earth’s crust, which caused the sandstone to crystallize (high-temperature metamorphosis) and take on the appearance of prisms, or alternatively, woodchips. They received the dark colouring from the iron mineral deposits (manganese and cobalt) in them that corroded when they came in contact with the air. 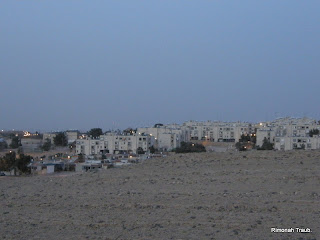 The incredible vistas of Machtesh Ramon can be viewed from lookout points in Mitzpeh Ramon. From here the Sawmill (Haminsara) is seen as a black spot in the crater.

There is easy access to the “sawmill” site that is on the south side of Highway 40 (from Mitzpeh-
Ramon to Eilat), between kilometer markers 92 and 91. After a short drive on the dirt-road, park the car and start the short ring-trail that leads on top of special lifted plates that allow walkers to tread above the quartzite prisms without damaging them.

Walk on, and follow, the platform boardwalk. This boardwalk was constructed to facilitate easy access to the top of the hill. In fact, it has a slight incline and is set up to be convenient even for individuals with mobility problems. It is made of recycled industrial plastic — compressed plastic bottles — in keeping with environmental principles. The trail is what is termed a recycling project.

The flora in the machtesh and around the minsara is typical of the warm desert areas of the . Of all of ’s desert regions, the Ramon area has the most diverse and luxuriant flora. This can be attributed to the difference between the geography of the area and the diverse climatic conditions on the “high”  vis-a-vis those on the “low” machtesh floor, which is drier and hotter than the ridge.

The vastly different weather conditions of the area during various seasons (freezing cold winters
and very hot, dry summers) also plays a large role in this. For instance, the bitter winter cold sometimes delays the main flowering season to late winter and spring, when the flowers will bloom with astonishing beauty. Lovely flowers in bloom, such as tulip (tsivoni), Jacob’s rod (clumps of bluish-green, grass-like foliage bearing dense spikes of pale yellow, star-shaped flowers), and anemone (kalaniyot) are found in the spring.

The tulip derives its name from the word “thuliban,” “turban” in Persian, which it is thought to resemble. When in bloom, its vivid, deep scarlet-red colour blankets the desert’s rocky floor and can be seen from miles away.Nowadays the tulip is a popular garden plant grown world wide - the pride of and the beauty of English royal and cottage garden. This celebrity in many international flower shows, whose each bulb fetched huge sums in the Tulipmania era (=/- 1620  - 1642 [In 1623 some sold for  1000Florins])  and for whom men mortgaged their homes and estates, was not known in the western world before the mid/ late 16th century.  No western painting, pottery or textile bears its image before this time.

In 1554 Sultan Suleiman the Magnificent (the builder of the wall of ’s ) presented a basket of tulip bulbs to the Austrian ambassador as a gift for Emperor Ferdinand I. These bulbs were sent by a special express courier to . Some of the bulbs were given to an Austrian princess who married a Dutch nobleman. This is the saga of the proud “Dutch tulip” of which millions are grown in  to be exported worldwide — even reaching Israeli flower stores.

Desert shrubs, including gymnocarpus and anabasis articulate (yepukar hamidbar), are the vegetation most commonly seen on the basalt stone, as well as on the limestone and sandstone in the machtesh. The gymnocarpus sheds its leaves to conserve water during the hot weather; the anabasis can regulate its water use by drying out its green bark.

Wildlife in the region includes ibex, leopards, wolves, foxes, mice and various reptiles, while vultures nest on cliffs of the machtesh. The coroneted sand grouse, a diurnal bird, is adapted to desert living. It requires water to drink, and to quench the thirst of the fledglings, the adult males wet their neck feathers and thus fly water to their nests.
Posted by Eretz Yisroel in the Lens at 11:08 PM