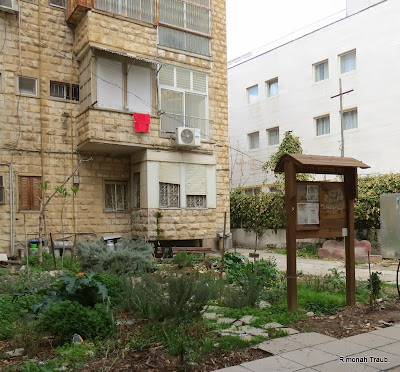 To the left of the Prima Palace Hotel there is a little lane that leads to a courtyard that has a small communal garden. From here one can cut through to reach Rechov Hanevi’im 86/84, next to Bank Tefahot.

The compound at Rechov Hanevi’im 82, at the western end of Rechov Hanevi’im, occupies almost its entire first corner, and was the (referred to in the previous column). Today it is a school for the children of foreign consulates, the .

The English mission (known as the London Jews’ Society Mission) bought and built up the property in 1863. The architect of the place was Conrad Schick (who also designed Meah She’arim and the Bucharim), and the compound is a work of beauty. It is built with six buildings in a circle, and a central garden of lovely plants.

Despite the medical advancements at Rothschild’s hospital, the general public had the mistaken impression that the gave better treatment and therefore went there to be treated. In addition, the hospital, run by Christian missionary organizations, offered free medical care to attract Jewish patients for the purpose of missionizing. Yerushalayim’s Rabbis were appalled and fervently objected. The Rabbanim published a cherem, stating that whoever died while in treatment at the would not be brought to kever Yisrael.

Also to counteract the mission, Jewish hospitals were built (Rothschild’s hospital, Bikur Cholim,
Misgav Ladach, etc.). The fight to gain Jewish souls was fierce and bitter. In 1897 the English mission added yet another hospital to the complex.

Following a large wave of terrifying pogroms in , from 1882-1883, hundreds of Jewish refugee olim came from to Eretz Yisrael and settled in Yerushalayim. Due to the dire poverty of the period, many of these Jews were enticed by the London Jews’ Society to come and live in the beautiful mission complex. The able-bodied among them were given employment at the place — clearing the land of rocks, building walls and planting ornamental plants and fruit trees. The Rabbanim of Yerushalayim vehemently objected. However, since they were in no position to find work and housing for their fellow Jews, they had no alternative to offer them.

Today one cannot understand the hardship those Jews endured and how enticing the offers of the missionaries were to them. One of the reasons Baron Rothschild began supporting Jewish settlement in Eretz Yisrael was the fact that many Jews in Yerushalayim were depending on the missionaries for their livelihood.

During World War I, the Turks used the mission hospital for their wounded soldiers, and in 1917, the British turned it into headquarters for the 60th Division conquerors of . Eventually, the compound became part of Hadassah hospital.

Professor Aharon Shulov, founded the zoological section of the Hebrew University of Mount Scopus. Among his goals was provide a research facility for his students by collecting animals, reptiles and birds mentioned in the Tanach. In September of 1940 as a small "animal corner" opened on Recchov HaRav Kook. The residents in the nearby buildings complained bitterly at the smell and noise generated by the animals.

In 1941, the Jerusalem Biblical Zoo, was moved to a 4.5 dunams (0.45 ha) tract at the eastern end of . Despite the complaints that also were heard from neighbors in this area, this remained the zoo’s home for the next six year. In 1947, it was moved to a plot of land on   provided by . At that point, there were 122 animals in the zoo. During the siege of , when food for the city's population was very scarce, the carnivorous animals were fed stray dogs found near garbage heaps which had been hunted down by the zookeepers. Even so, many of the carnivores died, and other, non-dangerous species had to be released.

The armistice agreement signed between and let remained part of the Jewish State but it was surrounded by enemy territory, thus making access limited. Therefore the humane United Nations kindly helped the zoo relocate to the lot of the Anglican complex. When the zoo arrived in at this new domicile, only two wolves, one hyena, one lion and one leopard were left.

Then it moved to Givat Komuna, adjacent to the present-day neighborhood of Kiryat Tzans, The zoo remained here from 1950 to 1991 and grew to (). By the Six-Day War there were more than 200 species, (over 500 animals), including most of the 130 fauna mentioned in the Tanach. However, during the war shrapnel and stray bullets killed 110 animals.

In 1991, the zoo closed its site in Kiryat Tzans and reopened officially on 28 February the Malcha valley. The project cost $30 million. The zoo currently holds over 270 different species adding up to over 2000 animals. The animals mainly live in outdoor exhibits as opposed to the traditional zoo infrastructure of bars and cages. Accompanying all animal exhibits are the biblical quotes referring to that particular animal. The whole zoo is sold to a kohen and therefore the animals are fed trumot and myasrot. 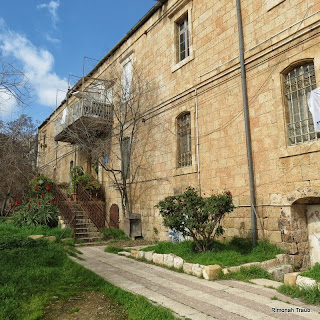 In 1878 the apostate Dr. Melville Peter Bergheim — who established Jerusalem’s first bank and helped create the foundation for Jerusalem’s modern commerce (he had come to Jerusalem as a pharmacist for the English mission) — built a luxurious home for himself and his family, now Rechov Hanevi’im 65 and Rechov Jaffa 70.

When Bergheim went bankrupt, the Wohlin kollel bought the property. Eventually, Eliezer Kaminitz, son of the hotelier Menachem Mendel Kaminitz (owner of a famous guesthouse in the , where Sir Moses Montefiore stayed), took over the house (1883) and turned it into a five-star hotel — “Beit Eshel Yerushalayim.”

He enlarged the building and planted a lush garden. Kaminitz prepared a special entrance and driveway for carriages, which let off . Baron Edmund de Rothschild was one of his lodgers, as were Rabbi Chaim and Rabbi Shmuel Mohliver. (Rabbi Mohliver was the person who convinced Baron Edmond de Rothschild to support agricultural settlements in Eretz Yisrael.)

When Kaiser Wilhelm II came to in 1898, the Jews erected a gate in his honour near the Kaminitz Hotel, decorated with lovely fabrics that were embroidered with silver and gold. The Chief Rabbis greeted and blessed the Emperor here.

Theodore Herzl and his Zionist delegation arrived by train in on Friday, October
28, 1898, well after the onset of Shabbos. They had come to plead their Zionist cause before the
Kaiser. (Harav Shmuel Salant put a cherem on Herzl because of this chillul Shabbos.) 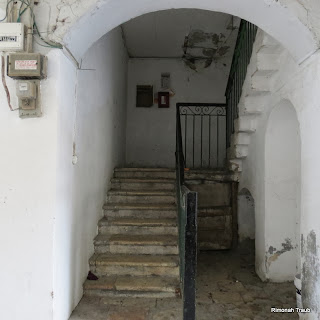 Although they had pre-booked rooms in the Kaminitz Hotel, they discovered on arriving at the lodgings that officers of the German Emperor had taken possession of the rooms. Herzl and his group were forced to sleep on cots in the corridor, or according to another version, on billiard tables. The next day they moved to a private home in Mamilla.

The prestigious Kaminitz Hotel was also a venue for wedding receptions. When Kaminitz's daughter was married here, she received a gift from hotel - a tiyul of Eretz Yisrael on horseback, accompanied by a cook.

By 1908, the building was not large enough to host all the incoming guests, and the hotel was moved to a different location. The edifice became a post office and then a school. Today it is a residential home and workshop. 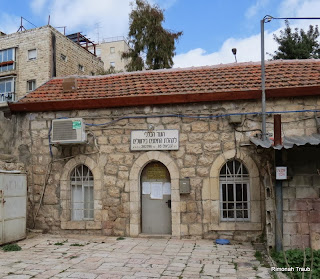 Hanevi’im. One can still see how stunning the building must have been in bygone days, yet what was once the most elegant establishment in the city looks forlorn, and its previously lush gardens are now parking lots.

The Vaad Haklali of the Teimani Chevrah Kadisha can be found in a small room at the back of 65 Rechov Hanevi’im
Posted by Eretz Yisroel in the Lens at 7:16 AM