The Eichmann Trial — Another Perspective.© 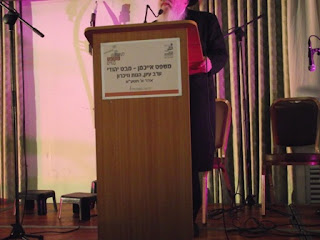 On 25 Adar I/March 1, 2011, the Center for Continuing Education of Mercaz Bais Yaakov in Jerusalem organized an evening seminar marking fifty years since the Eichmann trial. Hamodia brings you an overview of some of the material presented to teachers of Holocaust studies that will enable them to strengthen their students’ pride in the greatness of Jews and their love of Hashem, as well as their understanding of the ramifications of this historic trial. Harav Yisrael Meir Lau, shlita, former chief rabbi of Israel and current chief rabbi of Tel Aviv, and Holocaust historian Mrs. Esther Farbstein were among the guest speakers.

The first few days of the trial were a disappointment.Eichmann’s lawyer, Dr. Robert Servatius, claimed that the accused was not a citizen of Israel and therefore Israel could not try him. Additionally, he said, since the state of Israel had not existed when the “alleged” crimes were committed, it had no legal right to try him. Servatius, demanded that Eichmann be released from his glass cage.

It should also be noted that many of the nations which had sat back and done nothing as six million Jews were murdered in cold blood, now asked for the humanitarian release of Eichmann. (There were dozens of depositions for the defense, delivered by diplomatic couriers from 16 different countries: Nevermind, that Eichmann had been one of the main engineering mastermind and executors of the 'final solution').

The three judges, Moshe Landau (presiding), Benjamin Halevi and Yitzchak Raveh, denied Eichmann’s pleas and declared in the name of generations of Jews who would not be born due to Eichmann’s evil that Israel had the moral and civil right to put him on trial.

Before the prosecutor, Israel Attorney General Gideon Hausner, presented the formal charges against Eichmann, he read a letter of accusation containing powerful words that still resonate today.
“As I stand before you, judges of Israel, to lead the prosecution against Adolf Eichmann, I do not stand
alone. With me here are six million accusers. But they cannot rise to their feet and point their fingers at the man in the dock within the glass cage, the cry “I accuse!” on their lips. For they are now only ashes— ashes piled high on the hills of Auschwitz and the fields of Treblinka and strewn in the forests of Poland and washed away in its rivers. Their graves are scattered throughout Europe. Their voices are stilled, but their blood cries out. Therefore will I be their spokesman. In their name will I unfold this terrible and awesome indictment.”

KaTzetnik (a pen name for Yechiel De-Nur, originally Yechiel Feiner), who authored a number of books about his experiences in Auschwitz (not written from a Torah perspective even though he studied in Yeshivas Chachmei Lublin), was a witness for the prosecution on 23 Sivan/June 7. Due to emotional problems caused by his Holocaust experiences, this was one of the few times he appeared amongpeople. He had been convinced him to testify, to act as the voice of his murdered family. Many say that of all the testimonies,
his was the most emotional, although it was the shortest.

KaTzetnik described Auschwitz as a different planet. He said that he saw streams of Jews arriving at the Auschwitz train station; and then, as if he were a broken record, he kept repeating, “I see … I see...” All those glued to the Kol Yisrael radio station then heard a loud thud. KaTzetnik had fainted.

Many years after the trial, Rav Lau, one of the few who visited De-Nur in his Tel Aviv apartment, said to him,
“Yechiel, to say Auschwitz was a different planet is incorrect — it sweeps the truth under the rug.” Rav Lau told him that the horrors perpetrated by Eichmann and his cohorts took place right here on earth. Today, a three-hour flight from Israel takes one to Krakow, and forty minutes later one is in Auschwitz, where murderers who killed Jewish babies in the most barbaric manner wore suits and neckties, listened to classical music and attended operas. Nazi murderers debated philosophy, and after bloodying their hands all day killing Jews, they came home from their “jobs,” kissed their children, and watered the flowers in their window boxes. This was not the work of aliens from another planet, but of precise, orderly, well-educated Germans.

Today the statement “Auschwitz was a different planet” is a universally used cliché, but it is a distortion of fact, Rav Lau said. The cold-blooded murder of the six million is magnified when one realizes the depths of degradation to which “cultured” humans can descend.

What Changed After the Trial

The Eichmann trial took place sixteen years after the Holocaust, and five decades later it is clear that it was a historic turning point. The trial broke the survivors’ silence. One hundred twenty survivors, witnesses from all parts of Europe, were chosen so that the full scope of the atrocity would be presented. Before the trial, few had shared their experiences, but after the first testimony was heard, a long line of survivors clamored to appear in court. The world was shocked by the torture they described; at last the survivors had a voice.

The trial changed the way survivors were viewed, especially in Israel. Until then ghetto fighters and partisans, who fit the image of the fighting, suntanned Sabra, were considered the Holocaust’s heroes. But as soon as the Eichmann trial began, this perception changed drastically. Survivors were no longer universally blamed for the terrible destruction that had befallen them and were no longer asked, “Why did you not rise up to defend yourself? Why did you allow yourself to be led as sheep to the slaughter?” The world began to understand that things were not soblack and white. Survivors began to experience empathy and understanding, and some were recognized as spiritual heroes.

Most of all, though-out the testimonies the spiritual grandeur of our people was revealed, breaking out and shining though. If it was was when Dr. Yosef Klienmann ( the youngest witness at the trial ) told of a young boy who endured fifty lashes with an rubber hose in silence and then said it was worth of the pain to have been able to bring sidurim into the lager so others could pray. - Dr. Klienmann spoke at the 'evening' and told us to let everyone know we had heard  one who was in Auschwitz tell his story firsthand.  Or when one of witness told of how his mother had instructed her children that they would die as Jews with the cry of "Shmah Yisrael " on their lips.


The Eichmann trial ended on August 14, 1961, after fourteen weeks of testimony. On December 11 the verdict was announced: Eichmann was convicted on all fifteen counts, including crimes against humanity, crimes against the Jewish people, and membership in an outlawed organization.
He was hanged a few minutes before midnight on May 31, 1962. After the execution, a stretcher on tracks was used to roll his body into a specially designed furnace that was so hot no one could go near it, and he was cremated.
The next morning, on June 1, an Israeli navy patrol boat scattered his ashes over the Mediterranean Sea, beyond Israeli territorial waters, so that there would be no future memorial and that no country would serve as this evil man’s final resting place.

Hamodia thanks Rabbi Yeshayahu Lieberman of Mercaz Bais Yaakov for granting us permission to print this material.
Published in "Hamodia" 14 April 2011

Posted by Eretz Yisroel in the Lens at 8:53 AM