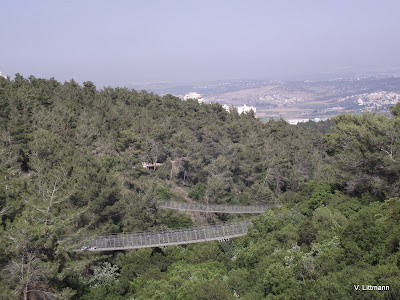 Unbelievable emerald views are seen from the suspended bridges at the Nesher Park, a “hideout” near Haifa. The hanging bridges are made of steel cables and beams and provide people with an elevated
view of the treetops of the forest, the Ketia River (a relatively short nachal achzav — no water usually runs in it — meandering through the park area and continuing on towards Haifa bay), the Carmel Mountain and the sea. 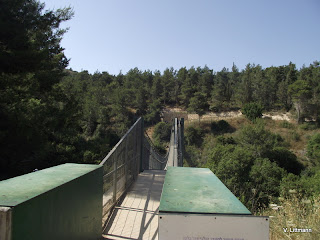 These two pedestrian bridges, suspended at a height of seventy meters, strung above a deep canyon, sway as people walk across them. They afford a wonderful experience and a great opportunity to teach your children about gravity as you stand above an abyss, hanging between heaven and earth, surrounded by trees. Constructed in such a way that they blend into the surrounding natural features of the park, the bridges enable access to various areas of the park.

Located on the northern slopes of the Carmel Mountain, south of the town of Nesher, the park covers an area of 200 dunams. It stretches from the area of Haifa University and the city of Nesher, to south of the Ramat Yitzchak neighborhood, an area bordering on Road 705 which encircles it from the south and the west.

The park has an area with picnic tables and a playground with activities for kids, making it a wonderful 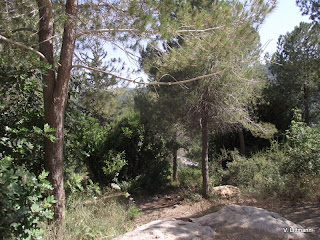 place to take your children to. The kiosk offers cold drinks, coffee and ice cream (there is ice cream with a Badatz hechsher). Even though the walking path in the forest is little more then a dirt lane, a stroller can be used with ease here, so one can come with babies and toddlers. Along the walking paths there are benches for visitors to rest on.

In the summer the place remains cool because of the shade from the woodland. There are numerous
oaks, pine and carob trees. Pines, which are not indigenous trees of Eretz Yisroel, were planted by the Keren Kayemet l’Yisrael. The carob, commonly known as St. John’s-bread, is a species of flowering
evergreen shrub or tree of the pea family and a native to the Mediterranean region. The seed pod may be crushed and used as a substitute for chocolate. Honey Suckle scents the air as it winds up the trunks of vegetation. There are also oaks, terebinth trees and strawberry trees

Although from the bridges one can view all the surrounding area, one can and should explore further.
There are marked walking paths on both sides of the Ketia River that pass above the banks of the river. It is also recommended to go down to the canyon itself (the trail is well marked) for a short and pleasant walk. The canyon is not deep but it is tangled, shaded and mysterious. The secret of its charm lies in the fact that it has an aura that makes you feel that you are in some far off place.

During the Mandate Period, the location of the park was specified to be preserved as a Nature Reserve. In the 50’s it was designated as a site to plant pine trees every Tu b’Shevat. Then, due to neglect, the area became nothing more than a dumpsite. The site seemed doomed to be entirely ruined. The Keren Kayemet l’Yisrael then took thearea under its wing as one of its special projects. A rehabilitation project was begun and the transformation is stunning.

Located in an area known as the Haifa Bay Region, the town Nesher is so called because of the Nesher Cement factory which is located there. The Nesher (eagle) factory, which was established in 1922 by Michael Pollack, a Jewish industrialist from Russia, may have been so named after the German cement company Geier (eagle in German).

Today Israel’s sole producer of cement is the Nesher Israel Cement Enterprises Ltd., that has led the country’s building sector for over 80 years. Since its establishment, the company has become a major force in Israeli industry through the high quality of its products and its commitment to customers and the environment. Nesher supplies most of the cement needs of Israel and the Palestinian Authority and also exports cement and clinker.

The town was founded in the early 1930s as a worker town for the Nesher Cement factory. At its
inception, the township was in a swampy and malaria-infested area. Employees of the factory
gradually moved there with their families and the settlement grew slowly. Over the last twenty years or so, the town Nesher has undergone momentous changes. Following the, wave of immigration to Israel from the former Soviet Union since 1990, the city’s population has grown by more then 100% from 10,000 resident to 25,000. In this period of time 3,000 new housing, units were built. The Israeli government recently raised the status of Nesher from a local council to a city.

How to reach the park: 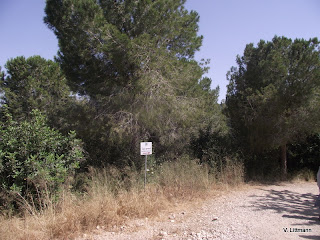 The best way to arrive at the park is from the new road that leads from Nesher to Haifa University.
One turns off in the direction of Ramat Yitzchak; at the junction, one takes the left turning onto Charuv
Street, until one sees a sign saying “Nesher Park – Keren Kayemet l’Yisrael.” There is a parking lot, and one can follow the marked paths from there. In order to reach the bridges, one should go in the direction of the arrow on the signpost reading “Ketia River” for approximately a quarter of an hour at a moderate walking pace.
Posted by Eretz Yisroel in the Lens at 8:44 PM