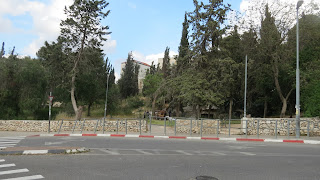 Beautiful pine and carob trees line sun-dappled paths of the small grassy . Located 200 meters north of the Shmuel HaNavi/Bar Ilan Intersection, it features burial caves from the Second Temple Period, claimed by some to be tombs of the Sanhedrin. Many also refer to this place as the “Tombs of the Judges,” referring to the "judges" of the Great Sanhedrin. This is also the place’s name in Arabic 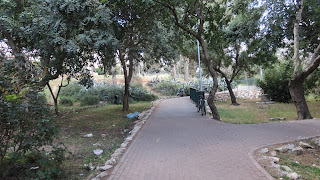 In 1235, Rabbi Jacob the Emissary, on his travels to raise money for a yeshiva (perhaps in ) mentioned these tombs and calls them the “Tombs of the Righteous.” He describes them saying “a tomb in which many wise men are buried….a cave within a cave”.

The next know one to write about them was Rabbi Joseph Halevi in 1450.  He identified what we assume are these graves as the the Tombs of the Sanhedrin. A drawing from 1659 depicts them as a beautiful structure with an arched colonnade at its entrance. Apparently, the facade of the tomb appeared differently in medieval times, and it was a magnificent site. 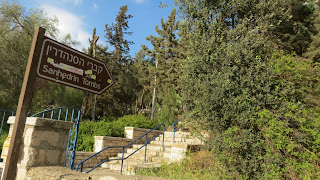 The first century tombs carved into the stone and engraved with pediments of leaves and fruit are claimed to be the most extravagant in the country with its Jewish art from the period.The underground complex, covering 10 dunams, has 80 rock-cut tombs that are noted for their elaborate design and symmetry.

It is thought that the name “Tombs of the Sanhedrin” was applied when someone miscounted the 80 burial niches, mistakenly stating there were only 71 slots – the number of the members of the Sanhedrin. There are several reasons to disagree with this dubious conclusion.

Firstly, the Arizal never said these were the Sanhedrin’s graves. The most obvious question is: What does it even mean that the Sanhedrin has a burial site? Which Sanhedrin? Members constantly rotated, were a variety of ages, and lived in different locations. Here’s another possibility: A group of dayanim all gathered and said, “Hey, let's all get buried together!”  Many archaeologists refute the theory these are the graves of the Sanhedrin. 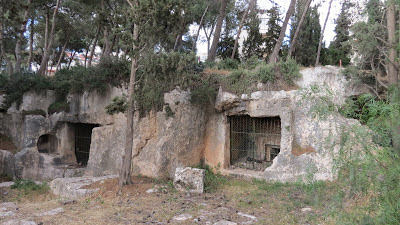 In French archaeologist investigating the tombs discovered a sarcophagus inscribed with the name Yitzchak. Over the protests of local Jewish residents, this person took the sarcophagus back with him to where it was displayed in the . 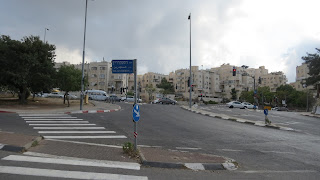 Some say that the Tombs of the Sanhedrin were once-upon-a-time the destination for Jewish pilgrimages and prayer from the thirteenth century and on (medieval times), and were considered holy by Jews. They would not pass by them without stopping to pray and inserting notes in the cracks of the tombs. In the mid1800s, the tombs were demarcated by a huge boulder that guided pilgrims to the site. However, during the English Mandate, the British emptied out all the bones then found in the crypts and left nothing there.

Sanhedria, the neighborhood in which the park is found was established in 1926. It was named after the Sanhedrin Tombs. After the 1929 Hevron Massacre, the suburb was evacuated. But, after the establishment of the State in 1948 and despite its proximity to the border with , the neighborhood began to prosper.

During the Six Day War on the other side of the barred wire fence near Sanhedria, masses of Arabs stood screaming and shaking threatening hands at the Jews. The avrechim in the area built underground bunkers to hide their wives and children. There was an imminent danger that the rabble would cross the fence and slaughter everyone they could find. The air-raid shelters were filled with beds to act as makeshift hospitals for the expected casualties.

If you’re planning a visit to the , it’s located on in Sanhedria.

I would thank Rav Menashe Bleiweiss (tour guide) for his help with this article. He can be reached at 02-533-4612
Posted by Eretz Yisroel in the Lens at 12:05 PM