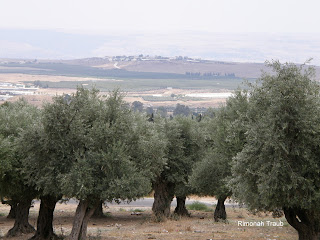 Hatzor HaGlilit  is a small town in the north of Eretz Isroel between Rosh Pina  and Tzfas. Founded in 1952 as an immigrant camp, the town is named for the nearby biblical site of Tel Hatzor. The city has a population of around 8,700, including a community of Gerrer Chassidim who founded the Be’er Miriam Seminary in Hatzor for girls from  Tsfas, Merion, and Tiveria.
Some of the ’s finest flora and fauna are found in the pinewood forest in the hills above Hatzor. Visitors to this area can enjoy the many nature trails, breathtaking views of the , and the sight of snow-capped in the distance.

Choni HaMa'agel’s gravesite is located above the town of . .Choni HaMa'agel lived in the generation of Shimon Ben Shetach. Once  when it was already Rosh Chodesh Adar and rains had not fallen. The Rabbis sent a message to Choni asking him to pray for rain.  Choni took his staff and drew a circle (igole) around himself in the sand. He then swore that he would not leave the circle  until rain fell. 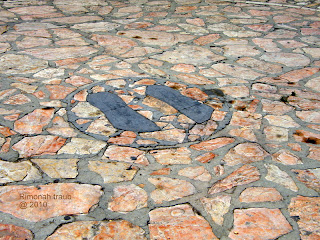 Chazal say he is called “HaMa'agel” because he drew this circle and became known as the circle maker. Seder Hadorot says he was called this name because he came from a place called Maagoll). In Shamayim, there was a hash decree of drought against Klal Yisrael, but HaKodosh Baruch Hu relented because of the honor of the tzaddik. He did not want Choni to be bound by his oath not to leave the circle..


HaKadosh Baruch Hu made a few tiny drops to fall. Choni then said: "Not for such rain did I ask." So HaKadosh Baruch Hu decided to change the decree of drought to one of a flood. A flood can cause great devastation. In those times the houses were not well built and very heavy rainfall could cause them to cave in and collapse. 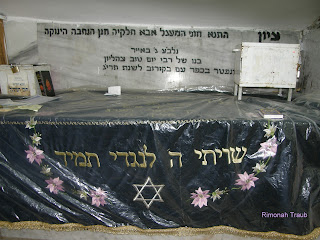 Great, big, heavy drops started falling, gishmei zaam (angry rain). Choni then spoke wisely: "Not for such rain did I ask. Your , cannot deal with bad, and they cannot deal with too much good. We need rain in the correct measure."  HaShem Yisbarach acceded, and gentle, beneficial rain began descending. All the wells filled up and the earth was saturated with this blessed rain.
The Talmud says that the Chachamin censured Choni. Rav Gamliel sent him a message. "If you were not Choni, I would put you into excommunication, but what can I do if you act before HaSh-m as a son before a father." (how can one be so full of 'cheek' and 'force' Hakodosh Buruch Hue to cancel a decree. But your status as a son allows you to behave as you did.)
Choni HaMa'agel slept for 70 years. When he awoke and did not those he knew around him, he requested death. "Either friendship or death." "O chavrosa o metosah."
Nearby to Choni HaMa'agel tziyun are the burial sites of two of his grandsons, Abba Hilkiyah  and Chanan HaNichbah (the Hidden), both renowned as well for  their ability to cause rain to fall though their  prayers. 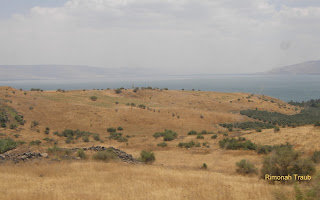 One time when the sages came to ask  Abba Hilkiyah, a parental grandson, to pray for rain.  Both he and his wife prayed, but the heavy-rain-clouds  gathered on the side of were his wife was davening. This was due to the fact she was home all day and used to give poor people food they could eat immediately to still their hunger, while Abba Hilkiyah only gave the poor money which needed first to be translated into food before they could eat.

When there was a drought, the Chachomim used to sent little children to Chanan  HaNichbah, Chonie's grand son from his daughter. They would hold onto his coat an cry out,  " Aba, Aba give us rain." where-upon he would turn to HaSh-m and and said, "Ribono Shel Olam, give rain for these who cannot distinguish between  a Father who can give rain and a father who cannot give rain."  And  rain would start falling in sheets . 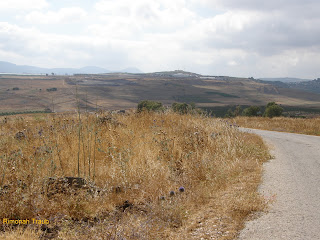 To reach the gravesites, drive north on Road 90. After the Rosh Pina Junction, turn left  until you come to Hatzor HaGlilit. Then drive for about 1.7km until the end of the town and turn left onto the road that winds around the mountain. After about 270 m, you’ll see a building with a domed roof. This is the gravesite of Abba Hilkiyah and Chanan  HaNichbah, the grandsons of Choni HaMa'agel. Continue on for about 300m to reach the gravesite of Choni HaMa'agel.

Published in the 'English Update' 16 December 2010 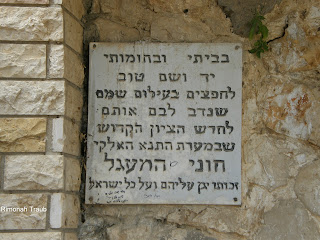 Posted by Eretz Yisroel in the Lens at 8:18 PM