Viewing the Layers of Jewish History from the Churvah© 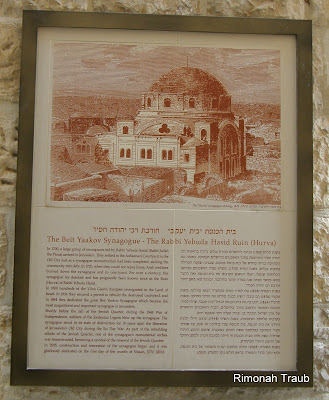 Rav Yehudah HaChassid, , arrived in Jerusalem 310 years ago after he had traveled throughout Europe gathering people to join him on aliyah. Some say he convinced hundreds, if not thousands, to come with him. On his arrival, he purchased the plot of land where the Churvah stands and  passed away just three days after his entrance into the city. His followers took on debts of 40% a year interest from the local Arabs to build the shul, which the Arabs subsequently burned down when the debts became outstanding. All Jews (Sfardie and Ashknazie) were forbidden entrance to the area of the Churvah, and Ashknazim were barred form Yerushola'yim for over 100 years. 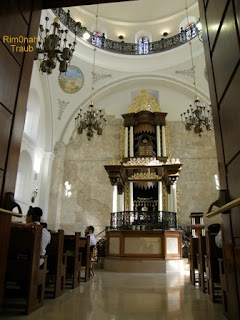 By1864, the adherents of the Vilna Gaon (Perushim) had rebuilt the shul in all its glory. Then, in 1948, the Arab Legion destroyed it again. When they blew up the building, only the eastern wall remained intact and a small section of the northern wall.  An arch was erected in 1977 to commemorate the destroyed shul. This reconstructed arch stood 42 feet high, as tall as one of the window arches of the original sanctuary.

Today the rebuilt Churvah is the tallest building in the  (twice the height of the arch). The Aron Kodesh is two stories high and an exact replica of the former ark down to the last detail. The Churvah stands not as a museum or historical reminder, but as a Torah center of learning and prayer with minyanim and study sessions around the clock.

By going down the steps beneath the Churvah, three meters down, we go back 2,000 years.  The  is built upon layers and layers of history, as Rav Shlomo Alkabetz says in Lecha Dodi: "Nivnetah Ire al tilah" (a city built upon ruins). The layers of the city of tell the story of our nation, as clearly seen in the underground chambers of the Churvah. 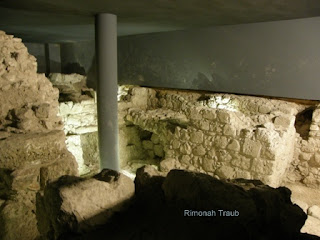 To our left are mikvehs that were probably used by Jews in the period. To the right are the the stone slabs of a Roman Dekamano. The Dekamano were Roman streets going from east to west.,(while a Cardoe went from north to south).  Side by side we find two cultures, Yaakov and Esav, Yisroel and , diametrically opposed to each other.When one rules the other falls. This Dekamano tried to obliterate the Jewish presence  from the Holy City.

We can climb the steps or take the elevator up to the balcony of the Churvah. From here, we see the courtyard of the Churvah. In the front of the building, is the Beis Din of Rav Shmuel Salant, Chachmay Deh'Yuedeiah. Outside on the left side of the building is his tiny home where Rav Salant lived for over 50 years and could hear the children of Etz Chaim learning Torah. 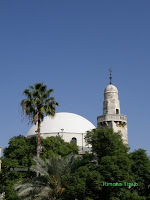 To the south side of the courtyard stands a mosque. The story goes that two brothers were warring with each other, and one offended the other by denying him an aliyah. The offended brother went and became a Moslem. The mother apparently loved the erring son and bequeathed him the property so that he could build a mosque there.

On the north side we see the Menachem Zion Shul, built in 1837 and named for Menachem Mendel from Shklov and in commemoration of the blessing of consolation recited on Tisha b'Av: "Bessed be He who consoles (menachem ) Zion and rebuilds Jerusalem." 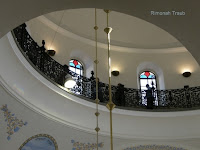 In 1948, the Jordanians destroyed approximately eighty synagogues and yeshivos. Only three escaped the rampage, including the Toras Chaim Yeshiva, what is now the Aish building, and the Tzemach Tzedek Chabad shul. Shortly afterwards. Jordanian General Abdallah Tell wrote in a letter:" No Jewish foot will ever step in the again. We have eradicated every one of their holy places and houses of prayer. They have nothing to do here anymore." Looking out from the vantage point near the top of the Churvah, we can see how wrong he was. 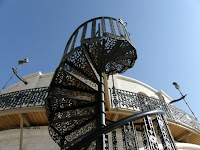 Form  this terrace one needs to take the intricately carved crafted steps to reach the upper gallery near the roof of the Churvah. On Erev Shabbos as the Shabbos enters the children of the Rovah go into the gallery and say Shir HaShirim. The sweet refrain echoes though out the Jewish Quarter. 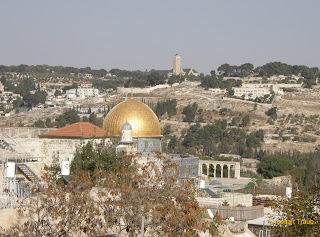 There is a walk way at the top which surrounds the building. From here a heart-breaking view of the floor of the Azarah of the Bies HaMigdash can be seen. The Klie Yakar says just looking at this scarce site has the potential to raise one spiritually.

Guided tours of the Churvah are scheduled every 20 minutes from Sundays to Thursdays, 9 am until 5 pm. Erev Shabbos and erev chagim, the tours are scheduled between the hours of  9am and 12 am. The cost is 25 for adults and 15 for children or invalids.
It’s necessary to book in advance by calling (02) 626-5922. 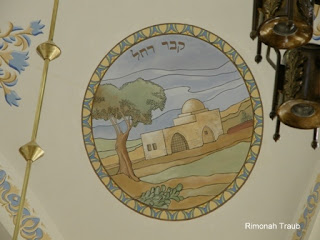 Posted by Eretz Yisroel in the Lens at 6:05 PM