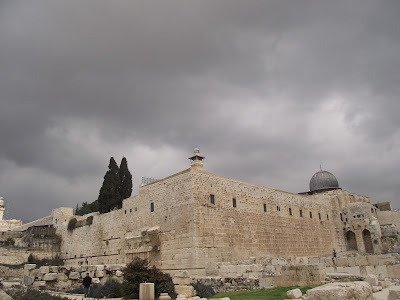 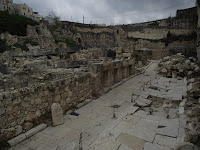 When you enter the through Shaar HaAshpot, you see the spread out below to your right. The park is divided into three sections, and in the first section, the archeologists have dug and reached to the Second Temple Period. Here you can view the remains of ’s main shopping street with entrances to a number of shops. 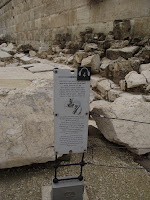 Robinson's Arch-- the name given to the arch constructed by Herod when he renovated the Beis HaMikdash-- is visible on the north of the southwestern corner of the 's retaining wall. This overpass had a width of 15.2 meters (50 ft) and carried traffic back and forth from the  (Valley of the Cheesemakers) to the . A replica of the fallen corner of the retaining wall - where the silver-trumpet blower stood and heralded the advent of Shabbos - can be examined close up.

The mikvehs in the area have two sets of steps with a stone barrier between them. This was so that those who were tahor, after toviling in the mikveh and were leaving, should not be defiled by those descending to be purified who were still tamay. 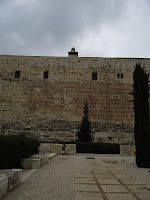 The second section was dug down to reveal a central walled courtyard of an Umayyad Arab palace. The Umayyad Empire (660-750 CE) was one of the largest empires the world has ever seen. Non-Muslims, especially Jews, were well treated under the Ummayads. They did not only guarantee them religious freedom and protection of civil rights but also appointed them to some of the highest places in government.

Leaving the courtyard though two arched entranceways, you encounter the third section of the park. This is a partially reconstructed labyrinth of Byzantine dwellings (324-638 CE).  Within are plastered walls and mosaics from that historical period. The mosaic stones are white, and the decorations are red and black. The was Christian and for the most part, treated its Jews harshly. 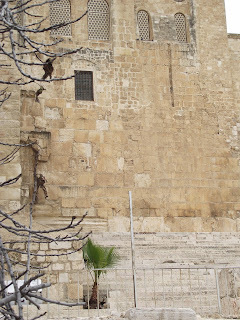 Above the Byzantine houses are fifteen pairs of steps that led up to the . Looking closely at these steps, you can see that one is narrow and the next one is broad, then another narrow one then a broad one, and so on until you reach the top. This was to ensure that those ascending to the would do so at a slow pace and thereby realize the greatness and importance of what they were doing. 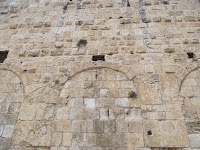 The two most used gates in times are above these steps and known as the Chuldah Gates.The of was located south of the . The area between the southern wall and the was the largest, containing most of the chambers. For these reasons most people entered and exited through the Chuldah gates, since they were the most conveniently situated. This is the reason there were two gates on this side. This may be the reason the  name ‘Chuldah’ – weasel -  was given to the gates because of their prominent position. Just as the weasel is found in the most significant part of the house, the foundation, so, too, were these gates in the most prominent position. 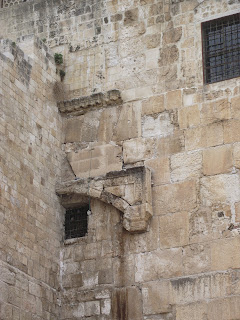 Alternatively, the gates may have been named for the prophetess Chuldah who taught the people during the First Temple Period (Kings II, 22:14). She, like her predecessor, Deborah, chose an open public place to prophesize in order to preclude the possibility of yichud. For this reason, Chuldah sat inbetween these two gates. Deborah sat under a palm tree whose foliage, in contrast to other trees, is at the very top, leaving the rest of the trunk bare, so all can see what is happening under the tree, even from a great distance away. 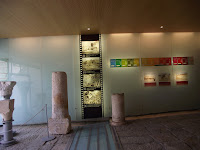 The is open Sundays through Thursday, from 8 am until 5pm. On Fridays and Erev Chag, it’s open until 2 pm. Admission price is NIS 30 per adult and NIS 16 for children, students, and soldiers. Visitors have the option of viewing two films on the site, but these films are strongly NOT recommended. 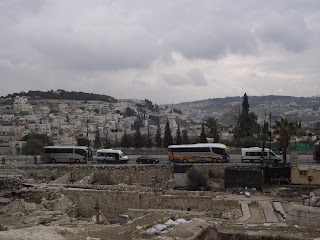 In the Mishpacha magazine there was a whole article detailing the Arabs’ quest to eradicate Am Yisrael’s connection and claim to Har HaBayis. “When the archeologists discovered the Chulda gates – dating back to the date of the Second Temple Era - the Waqf immediately had them sealed beyond recognition  and buried the adjoining steps and ancient tiling". (Mishpacha Tammuz 5766 – 7th of December 06).