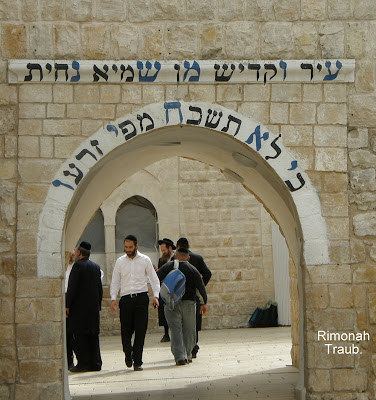 The picturesque  of lies on the slopes of which at almost 4,000 feet is the highest altitude in the area. Meron is located along the Acco-Tzfat road, approximately nine km from Tzfat. At the summit of the mountian are the tombs of both Rebbe Shimon bar Yochai and his son Elazar. Rabbi Yosef ben Kissma, Hillel the Elder, and Rabbi Yochanan HaSandlar are also buried in Meron. 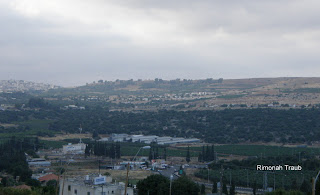 Many of the homes in Meron have guest cottages and rooms known as “tzimmerim” which are rented out to visitors and tourists. For popular times such as Rosh HaShannah, and the Shabbos before Lag B’Omer, reservations need to be made months in advance because of the huge demand. During Bein HaZmanim and even a regular Shabbos, there may be hundreds of visitors who come to spend time at Rebbe Shimon’s tomb.

Meron in Ancient Times
The ruins of a Canaanite fortress can be found on . Yehoshua won a battle against Yavin, the king of Chatzor and his allies at Mei-Marom which is a spring near Meron.(Yehoshua, Chapter 11).

Marom/Meron was included in the northern Israel kingdom after the division of the Kingdom under Rechavam. It was listed by the Assyrian King Tiglath Pileser III among the Galilean cities he conquered from the Kingdom of Israel in 732 BCE and whose inhabitants he exiled to Assyria.

During the Second Temple Period, it was already known as Meron, and was mentioned in the Gemara  as being a village in which sheep were raised. In fact, the name Meron is derived from “imrin,” meaning “flocks of sheep” which refers to the rich dairy production of the region in ancient times. The area was also renowned for its olive oil. The Talmud Yerushalmi mentions a certain man from Meron who owned 100 wine barrels and 100 oil barrels, a testament to the city’s thriving economy.

Meron survived the Great Revolt as it was the headquarters for the 3rd Roman Legion encamped in the area. Members of the Yehoyariv priestly clan settled in Meron following the destruction of the Temple.
Meron was an important city during the Mishnaic and Talmudic periods.

The remains of one of the largest synagogues in the , dating back to the 3rd century CE, have been found in Meron.  Its structure is oblong in contrast to other synagogues which were usually square in shape. Its western wall was carved into the rock. Remnants of the ark and the bima have survived, as did its southern wall. On the eastern side of the synagogue, ’s Department of Antiquities has reconstructed the remnants of steps which worshippers used to enter the synagogue when they came from the valley in the direction of Gush Chalav. Some claim that the synagogue in Meron was in use up to the end of the 12th century. 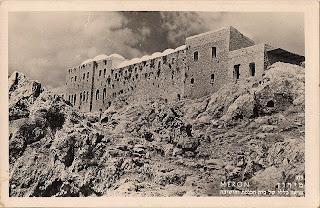 Meron from the 12the Century until the Present
Benjamin Tuldelah, a Navarrese rabbi, visited Meron in the 12th century. In 1210 Shmuel Ben Shimshon, a French Jew, visited Eretz Yisroel and prayed at the graves of Rabbi Shimon and his son. An Arab geographer named al-Dimashqi described Meron as a satellite of Tzfat.  He noted its "well-known cave" where Jews traveled to celebrate one of their festivals.

In 1517 Eretz Yisroel was absorbed into the Ottoman Empire. By 1596, it was listed as part of the nahiya  ("subdistrict") of Jira, of Sanjak Safad with a population of 715 people who paid taxes on goats, beehives, and a press that processed either grapes or olives.
In the Galilee earthquake of 1837, Meron suffered relatively minor damage, but the walls of the tomb of Rabbi Elazar were dislodged.
In the mid-19th century, Edward Robinson visited Meron during his travels in Palestine and Syria. In his journal, he portrayed Meron as "a very old- looking village situated on a ledge of bristling rocks near the foot of the mountain. The ascent is by a very steep and ancient road. It is small, and inhabited only by Muhaammedans." Robinson observed that this place was the focal point of Jewish pilgrimages. He described the  low-domed structures of the tombs of Rebbe Shimon bar Yochai and his son Rebbe Elazar that were usually kept closed with the keys held in Tzfat. 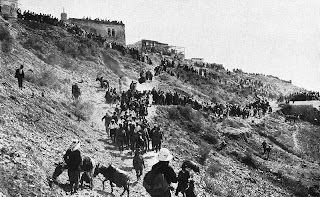 Sometime in the latter half of the 19th century, Laurence Oliphant also visited Meron. A Sephardic rabbi who owned the land in the area that made up the Jewish quarter of the village was his guide. The rabbi had brought six Jewish families from Morocco to work the land, and there were another twelve Muslim families making up the whole of the village's population of that time. By the late 19th century, Meron was a small village of 50 people who cultivated olives.
The ruins of the Meron synagogue were acquired by the "Fund for the Redemption of Historical Sites.” towards the end of World War I. Meron had an Arab and a Jewish quarter until at least 1931. The Arab quarter was the larger one and the Jewish quarter was built around the tomb of  Rebbe Shimon. A survey conducted in 1945, towards the end of the British Mandate in Palestine, showed an entirely Arab population in Meron, with a boy's elementary school in the village. 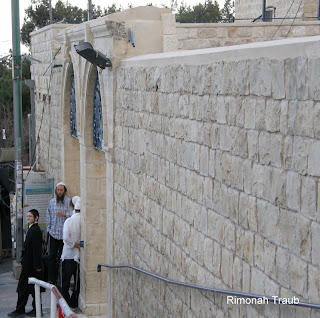 The only year that people did not go up to Meron on Lag ba Omer was during the Israeli War of Inderpendence, as Arabs were sitting at its summit and shooting at Zfat. Evently, the entire Arab population fled, and a moshav was founded in 1948 by observant soldiers who had been discharged from the army. These were Hungarian and Polish members of the “HaPoel HaMzrachi” organization. The is today a religious moshav that has approximately 100 families and is constantly growing.

On July 14, 2006, a Katyusha rocket fired during the Lebanon-Israel war killed a grandmother, Yehudit Itzkovich, and her seven year old grandson Omer Pesachov. Four others were injured. The following day a new barrage of rockets hit Moshav Meron, however, Baruch Hashem, there were no additional injuries. 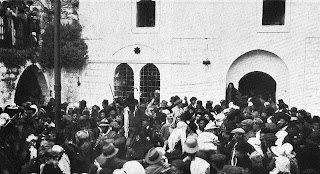 Every Lag B'Omer thousands of people stream to Meron, for the yahrtzeit and hilulah of Rabbi Shimon bar Yochai ("Rash-bee"). This has been so from ancient times. In a letter to his brother, Rav Ovadyah of Bartinora wrote in 1389, he describes the celebrations at Meron on Lag B'Omer, with the 'kindling of large touches'. As far back as five hundred years ago, it is known that a least a thousand people used to congregate in Meron on Lag B'Omer. Now-a-days, the numbers of pilgrims have increased astronomically - to hundreds of thousands who rejoice with extraordinary enthusiasm and holy joy. 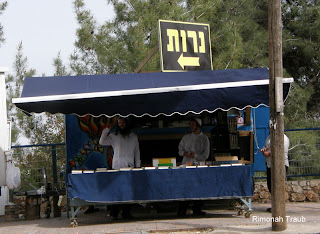 Rabbi Shimon bar Yochai was a prominent Tanna (Talmudic sage) who lived in Eretz Yisroel after the Second churban. One of the five talmidim of Rabbi Akiva, his name and halachic opinions are sprinkled throughout the Mishnah and Talmud. He is the author of the Zohar. The day of Rashbi’s demise occurred on the thirty- third day of the omer. On that day the world was filled with a great light of endless joy as he revealed the secret wisdom of the Zohar to his talmidim. That day was to him and his disciples like the day on which a groom rejoices under his chupah. The sun did not set until he taught all he was permitted to reveal, and only then night fell. This is why Lag B'Omer is celebrated with great rejoicing and there are bonfires lit on this day to commemorate the delayed sunset on the day of Rashbi’s petirah. It is told that after his passing there were great disputes among many different communities. Each wanted him to be buried in their town. A ring of fire encircled Rashbi's coffin. The coffin then lifted itself up and carried itself to Har Meron. This conclusively settled the problem. 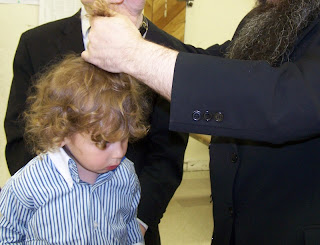 It has become customary, on Lag B'Omer,  to cut the hair of boys who have reached the age of three, for the first time and leave them side-curls. This is to train them in the mitzvah stated in Vayikra 19, that one should not round the corners of one's head. Many travel especially to Meron on Lag B'Omer for this haircut.
Rabbi Shimon bar Yochai was such a great tzadik that his merit was sufficient to protect the world against calamity and a rainbow was never seen in his days.  Rashbi once criticized the Roman government and was forced to go into hiding with his son for thirteen years. They took shelter in a cave (which tradition says is in Peki'in). A carob tree sprang up and a spring of fresh water gushed forth next to the cave. Casting off their clothing (so it wouldn’t wear out) and embedding themselves in the sand up to their necks -except during prayers - they studied Torah all day long. 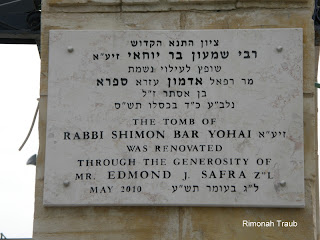 One time Rabbi Shimon was sent to as an envoy to save the Jewish people from a harsh decree. A demon obligingly entered the emperor's daughter, so that Rashbi could exorcise it from this lady and thereby cancel the decree.

Note: Many Kohanim are stringent not to enter the complex that houses the gravesite.