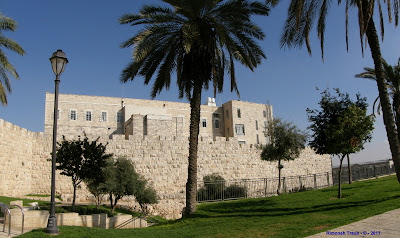 Opposite the intersection of Rechov Yaffo and Rechov Shivtei Yisrael, where Rechov Shlomo Hamelech meets Route 60, is a square — adjacent to a corner of the Old City — which since 1967 has been called Kikar Tzahal. Throughout the years of British rule in Mandatory Palestine it was named Allenby Square.

The square was given this name to commemorate the ceremony held here by Field Marshal Edmund Allenby when the Turks surrendered to the British in 1917. On Dec. 11, 1917 British general Edmund Allenby entered Jerusalem through Jaffa Gate as a victor, after routing the Ottoman army. Before entering the city, he dismounted, and together with his officers entered Yerushalayim on foot so that he would not be seen by the locals as a conqueror. He later also accepted the official surrender from the Turkish representatives at the Citadel’s Tower of David, located nearby.

Immediately after the British evacuated Jerusalem on May 14, 1948, during Mivtzah Kilshon (pitchfork campaign), fierce battles raged around Allenby Square. Israel ended up with control of the area up to the city wall. The area behind the walls remained in Jordanian hands. An unsuccessful attempt to break through the wall next to the square, with 250 kilograms worth of explosives, was made by Lechi forces on the night of May 18, 1948.

On Nov. 30, 1948, at the time of the official cease-fire in Jerusalem, Moshe Dayan sat with Abdullah Tell and U.N. mediators, slicing up the city. Using a map scaled at 1:20,000, each side used a different colored wax pen to delineate the furthest point under its control. Israel drew a red line and Jordan a green line. This is the origin of the phrase used to describe land that is “beyond the green line.” 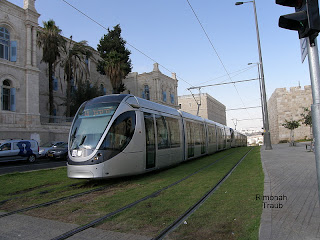 At the time, it was thought that these “cease-fire lines” were temporary, but the 1949 Armistice Agreements fixed the position of the lines as the borders between Israel and Jordan. For the next 19 years Allenby Square was part of the shetach hefker(no-man’s-land) between the two states. The lightrail train tracks that run near Kikar Tzahal today, mark the place where the border used to be.

The largest single building constructed in Yerushalayim before World War I was Notre Dame de France, which is across the road from Kikar Tzahal. One hot summer’s day in 1954, a patient of this Jerusalem French hospital blew her nose into a tissue, which she then threw out the window into the shetach hefker. All of a sudden she realized that her false teeth had somehow detached themselves into the tissue and were on the ground outside. Today they would have landed on busy, bustling Paratroopers Road, but at the time there was nothing there except no-man’s-land, covered with spiky barbed wire, triangular concrete blockades and
land mines. And to top all this off, Jordanian legionnaires stood on the Old City ramparts, ready to shoot at the slightest provocation.

The nuns of the hospital were in a titter — how could they retrieve the dentures? After prolonged negations with Israel, Jordan and the United Nations, some nuns, Israeli soldiers and the chairman of the United Nations’ Mixed Armistice Committee — holding aloft a white flag — were allowed into no-man’s-land. Believe it or not, the lost teeth were found, but unfortunately, despite the good will on all sides, three of the teeth had melted from extreme heat at the time.

Behind the walls of the Old City, built by Sultan Suleiman the Magnificent in 1537, is the College Freres, a Franciscan school. This is erected on the base of a tower named for Goliath because of an ancient (unreliable) tradition that this is where Dovid placed Goliath’s head after he killed the giant. Some call it Tancred’s Tower, after the Crusader commander who encamped here before he attacked the city from this direction on July 15,
1099. Tancred promised amnesty for the many men, women and children in Yerushalayim. But despite his pledge, he burned the Jews alive and ruthlessly slaughtered the Muslims. Built on the rock, the imposing Crusader tower is located mostly inside the walls, but a fair amount of this large tower is seen outside the walls.

In the years when Yerushalayim was divided, students playing soccer in the schoolyard often kicked balls into no-man’s-land. In December of 1965, Israel was asked to make a humanitarian gesture and return the sizable number of balls to theschool. Israel, realizing that this opportunity afforded her the means to spy out the area, immediately agreed. With the mediation of U.N. officials, an Israeli soldier marched through the minefields of no-man’s-land while Jordanian soldiers sitting on the Walls directed him as how to avoid stepping on mines! A few days later, at a jubilant celebration inside the U.N. building across the road, 28 balls were handed over to the school.

Across the road from Kikar Tzahal is a bulletriddled, round building. This is the back end of the original Jerusalem municipal building that was erected in 1930, the jagged holes in its facade having been made by Jordanian bullets from 1948 to 1967. The mayors of Jerusalem consistently refused to move City Hall to a safer location.

The swift, miracle-filled Six Day War united eastern and western Jerusalem on June 7, 1967. The byway to Kikar Tzahal was named for the army unit that played a major role in reuniting the Holy City. Rechov Hatzanchanim (Paratroopers Road) begins at Kikar Tzahal and ends just below Rechov Ha’ayin Chet — where it swerves sharply away from the walls and gets a new name. 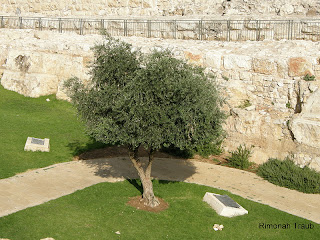 On Sept. 14, 2004 the Kikar Tzahal Tunnel was opened. About 400 meters in length, the tunnel connects what is commonly known as Highway One (Rechov Hatzanchanim) to Kvish 60 (Chativat Yerushalayim).

Next to Kikar Tzahal is the lovely Corob Gardens, which has a defensive moat that is said to predate the Crusaders, and an aqueduct which brought water into the city in ancient times.
Published in Hamodia.

Posted by Eretz Yisroel in the Lens at 3:53 PM