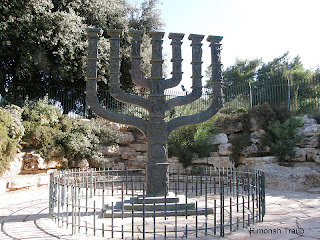 The bronze, four and a half meter high Menoras HaKnesses stands in the by the main entrance to Gan HaVradim. This impressive menorah, in the shape of the menorah that appears in the Arch of Titus, was created by Jewish sculptor Benno Elkan from . It was given in 1956 by the English parliament as a gift to the State of Israel.
Like a “visual textbook,” it has engravings of some thirty important events, idioms, characters and terms from Jewish history. Each of the seven branches pictures a number of specific scenes, carved in relief.

The menorah interweaves themes of galus and geulah, showing the waves of the rise and fall of the Jewish People throughout history. The first depiction on the right hand branch illustrates Yirmiyahu bewailing the Churban. While the last left hand branch’s upper engraving shows the Final Redemption as pictured in Yeshiyahu where a lion and a lamb will live in harmony (Isaiah 2:4, 11:6).

The 70 years of the Babylonian Exile (lowest representation on last left hand branch) is illustrated by showing the exiles lamenting the destruction of and the by the rivers of Bavel. This scene is counterbalanced by a depiction of the Shivas Tzion of Ezra seen on the following branch at the top, together with an image  of Nehemiah,(lowest bottom carving on outer right hand branch) who served King Artaxerxes of Persia in a high-ranking position. He fortified those who had come back to Tzion from with Zerubavel and Yehoshua the High Priest. In the face of much opposition, he was instrumental in organizing the rebuilding of the walls of and helping to settle many Jews there. Plus, the observance of the Torah was strengthened greatly with his help. 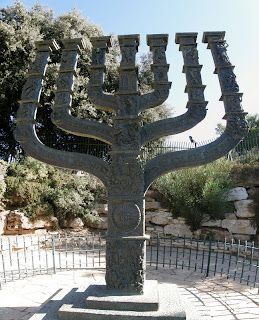 The engraving on the outer left hand branch shows Rebbe Yochanan ben Zakai  asking the Roman authorities to establish a center in Yavneh for the study of Torah. He realized Yerushalayim and the were facing destruction, and he made his request in order to preserve the Eternal People and our Torah to ensure our continued survival as a nation.

The central point of the menorah to which the eye is instinctively drawn is a circle exactly in its middle which says “Shemah Yisrael.”  The central branch‘s first engraving shows Hur and Joshua holding up Moshe hands in the war against Amalek. When the Bnei Yisrael looked up at Moshe’s upheld hands and turned their heart to believe in HaKodesh Baruch Hu, and they were able to overcome the enemy. This symbolizes the fact that wars are won not by military superiority but by the fact that Hashem fights for His Nation that clung to Him throughout their bitter test of galus with Shemah Yisroel on their lips.

The words from the Navie Z’charyah 4, which are caved on the bases of the two outer arms state strengthen this concept “Not because of the (number of) soldiers or the (military) strength, but with My Rooach said HaShem Zva’cot”. The scene symbolizing David’s triumph over Goliath, echoes the above ideas. (3rd branch from the left top).  As does the Chasmonian victory of the few over the many is portrayed in the 2nd scene of the outer right hand branch. When we consider the numerous wars fought in Eretz Yisroel from the conception of the State, we will realize that it was only Hash-m Kindness to Sherit HaPlatah, that we where able to prevail over the sea of Arabs around us and are still here today. It will be only with the help of the Almighty we will survive our recent problems.
There are many other scenes depicted, such as David’s triumph over Goliath, Shlomo’s understanding of the language of the birds, and the Hashmoniam victory of the few over the many. Avraham Avinu is shown buying the Cave of the Machpelah as well the Matriarch Rachel, bitterly weeping for her children who were exiled in .

To reach the Menoras HaKnesses, travel on the , turn in at the Supreme Court onto Rechov Rothschild, and keep on going until you see the Knesset Menorah to your right.
Published in the English Update 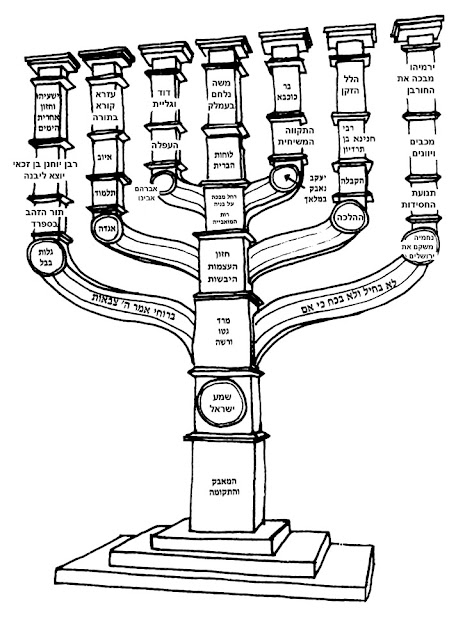 Posted by Eretz Yisroel in the Lens at 8:39 PM