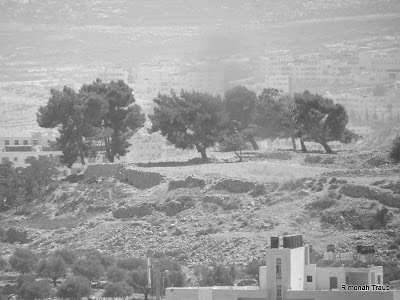 Looking out from a point in Psagot one sees a little hill, crowned by a few green trees, on the southern outskirts of Ramallah. In its preliminary excavation, in 1868, this area was identified as Tel en Nasbeh, considered to be the biblical Mitzpah.

In 1923-34 a major excavation was conducted, which concurred with the above opinion. There is a minority view that Mitzpah was some four miles north of Jerusalem in Nebie Shmuel (the Prophet Samuel) itself. There is no identification from the Arizal that Nebie Shmuel is in actuality the kever of Shmuel Hanavi; about eight places around Eretz Yisrael are thought to be the Navi’s resting place.

The excavations of Tel en-Nasbeh in Ramallah uncovered many strata, dating back to the period of the Avos. Unfortunately, today nothing can be seen as the Muslims have never been interested in historical excavations and they let it all go to seed. In addition, due to its location (in Ramallah), one cannot visit Mitzpah, but can only view it from Psagot.

Mitzpah is mentioned many times in Tanach. Mitzpah (“watchtower”; “the lookout”; “over-view”) was a city in the allotment of Binyamin. Me’am Loez, on both Yehoshua and Shoftim, says it was a holy traditional place of assembly for teshuvah and tefillah in times of stress. This was so since the time of Joshua when HaShem had performed a great miracle for the nation here. (Joshua 11:8). It was also a place Am Yisrael gathered to prepare for war (e.g., Shoftim 10:17). We find Yiftach was appointed as a leader of the nation at Mitzpah (Shoftim
11:11).

This was the place where Am Yisrael gathered, incensed at an atrocity that occurred, and decided to go to war against Shevet Binyamin after the incident of pilegesh baGivah (ibid. 20:1-11). Here they made an oath to withhold their daughters from the remainder of that shevet (ibid. 21:1).

After the Aron Hashem had been returned by the Plishtim and housed in Kiryat Ye’arim (near modern-day Telz Stone), Shmuel gathered all the people at Mitzpah. Here Klal Yisrael poured out their hearts like water, in repentance before Hashem. On hearing of the assembly of teshuvah, the Plishtim feared that the Jews would now merit miracles and decided to stage a surprise attack on the unarmed nation amassed in Mitzpah.

With heartfelt tefillos, Shmuel offered a small sucking lamb that was in her first week of life, drawing it as a parallel to the Yidden who had just repented. Just as this tender lamb could not yet see and placed all its trust in the milk of its mother, so too the nation was placing its entire bitachon in Hashem.

Hashem caused the terrain to shudder with quakes that created many crevices, into which the Plishtim fell. The sky was lit up with fiery lightning flashes, and thunder roared though the air. The men of Yisrael went out from Mitzpah and pursued the enemy, chasing them away completely. To memorialize this nes, Shmuel set up a stone between Mitzpah and the Crag, naming it Even Ha’ezer (“stone of aid”).

Following this event, thePlishtim were subdued and did not attack the Jewish nation for many years (Shmuel I, 7:5-12). It was in Mitzpah that Shaul, the first king, was anointed al pi hagoral (ibid. 10:20).

At Tel en-Nasbeh a massive fortification system wasfound that could well be what King Asa constructed with the building material he took from the fortress of Baasa, King of the Ten Tribes, that had been on the Ramah. Later in his life Asa became very ill as a punishment for drafting the entire nation for his building project. Hashem had been angered that Torah scholars had been conscripted and their learning had been disturbed ( Bavli Sota 10 on Mealachim I, 15: 21–24)

At the end of Bayis Rishon, just after the Churban, we find that Mitzpah figures prominently. Hashem gave Yirmiyahu the choice of either going down to Bavel while Hashem (kivyachol) would stay in Eretz Yisrael, or the opposite. Yirmiyahu opted to stay in Eretz Yisrael with the remaining 6,000 Yidden left there. Mitzpah became the capital during that short period of 52 days.

Gedaliah ben Achikam ruled from Mitzpah and was killed here. Gedaliah was warned about Yishmael ben Netanya (a wicked Jew, who was the agent of the king of Amon) and Yishmael’s vile intentions against him, but he refused to accept lashon hara. Gedaliah was murdered on Rosh Hashanah by Yishmael, after which Yishmael went on a rampage and killed many people and took others captive.

Even though the murderer had been chased away, the people were still afraid of the reaction of Nevuchadnetzar to Gedaliah’s death and they asked Yirmiyahu to intercede with Hashem for them. Yirmiyahu only received a reply from Hashem after Yom Kippur. The people were told to stay in the Land and not fear the Babylonian King, for Hashem would save them from him. Unfortunately, they did not heed Yirmiyahu’s words, and left to Eygpt, where they sinned and were punished. The murder of Gedaliah ben Achikam is considered equal to the burning of the Beis Hamikdash. It was the final phrase of the destruction and sealed the complete exile from the Land, and is the reason we fast on Tzom Gedalia.

In the first book of the Maccabees in chapter three, we are told that Yehudah, his brothers and followers assembled at “Mizpah opposite Yerushalayim a former place of worship of Yisrael”. Here they fasted and prayed in sackcloth. They set up their army in accordance with hallacha. Officers, over thousands, hundreds, fifties and tens were appointed. Those whom has planted new vineyards, built new homes or had just married - were sent home.

Mitzpah is located in the Arab city of Ramallah — the wealthiest Arab city in the area. From Psagot it can be seen, large and sprawling, frighteningly close to the Jerusalem skyline on the southern horizon. Ramallah currently serves as the de facto administrative capital of the Palestinian Authority. The city itself is said to have a population of nearly 25,500, yet there are many more hundreds of thousands of Arabs living in the surrounding area, including Al-Bireh. Ramallah was founded in the mid-16th century by Christian Arabs. They are now in the minority (25 percent) and are being hounded by their Muslim neighbors. 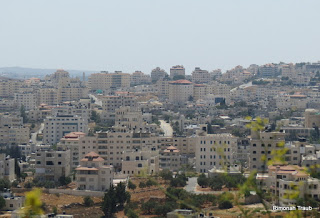 Following November 1947, when the U.N. proposed the partition plan, the militiamen of Lydda and Ramle attacked and blocked Jewish traffic on nearby roads leading to Jerusalem. Operation Danny was staged to capture these cities. Two days after the campaign, only a few hundred of the 50,000 to 70,000 residents remained in the two towns, as most of them had fled to Ramallah. The city became a magnet that attracted many other Arabs.

Ramallah residents were those who started the first intifada, in 1997. After the Oslo Accords required the Israeli army to abandon the Mukatah in December 1995, Yasser Arafat took it over and the Mukatah became known as Arafat’s Compound. The al-Aksa intifada (second intifada) started in 2000. In one of the first violent attacks, on Oct. 12, 2000, two Israeli army reservists, Vadim Norzhich and Yosef Avrahami, were lynched in Ramallah and their bodies were mutilated.

Psagot, which in Hebrew means “peaks,” was founded on the peak of Mount Tawil in 1981 by five families from the Jerusalem neighborhood of Bayit Vegan. The name symbolized the hope that the new village would achieve a peak (the climax) both in settlement and the study of Torah. A year after its establishment a group from the Kerem B’Yavneh yeshivah came to create a kollel in the place.

There are now about 1,800 people dwelling in the settlement. During the course of the second intifada, snipers constantly shot at Psagot from buildings in Ramallah, leading to the construction of a concrete wall to protect the inhabitants. In 2001, the Israeli army which was stationed nearby fired two missiles into Ramallah, effectively putting a stop to the barrage of fire.

The Psagot settlement, citing security concerns, unsuccessfully petitioned the High Court of Justice in November 2009, to stop construction of the Al-Bireh International Stadium.

The Yerushalmi (Pe’ah 7:4) says psigim are the berries found at the top of a cluster of grapes. Although psagot is a modern (not classic) form of the Hebrew word psigim, it is fitting that in 1998 vineyards were planted in Moshav Psagot and the Psagot Winery was founded. They have a modern barrel cellar, in addition to some oak barrels dating back to the Second Temple, stored in a cave. In 2010, the winery produced 80,000 bottles of wine, the majority of which went for export.