The 9/11 Living Memorial in Jerusalem© 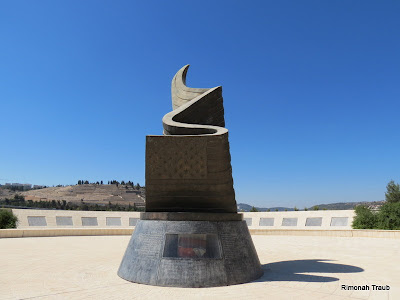 There is a 9/11 Living Memorial in Jerusalem. Located on a plateau in the Arazim Valley near Ramot, the monument was dedicated on Nov. 12, 2009, almost two years before the memorial “Reflecting Absence at Ground Zero” in Manhattan (designed by the Israeli-born architect Michael Arad) was completed. It is the only place besides the United States that lists the names of the 2,974 men, women and children whose lives were so needlessly snuffed out by heartless terrorists in the horrifying nightmare of 9/11, as well as the victims’ countries of origin. In the list are the names of many Jews, 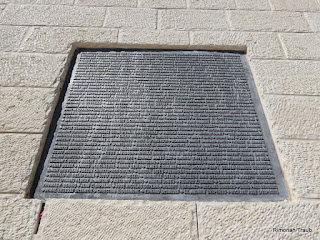 Set against the magnificent backdrop of Jerusalem, the Living Memorial is an emotion laden site from which to remember the victims of 9/11 as well as consider the thousands of victims of terrorism worldwide. One can also reflect on the nissim and hashgachah pratis that saved every single member of Hatzolah on that terrible day, as recounted in the book Even in the Darkest Moments. 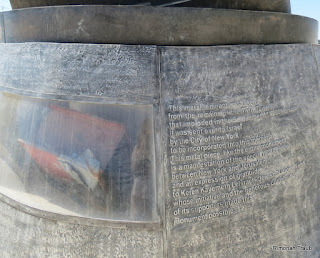 Designed by award-winning Israeli artist Eliezer Weishoff, the 30-foot-high bronze sculpture depicts an unfurling American flag engulfed in fire that transforms into a memorial flame. The work is set on a gray/black granite base that includes a metal beam from the wreckage of the Twin Towers, which was generously donated to the Municipality of Jerusalem by the City of New York.

Surrounding the sculpture is a crater-like stone plaza lined with metal plates that bear the names of
those who lost their lives on that day in New York, Washington, D.C., and Pennsylvania. Amphitheater-style benches along the interior provide mvisitors with space for viewing and reflection.

The plaza can hold as many as 300 people. Each part of the memorial is meant to commemorate the awful events of 9/11. The whole plaza surrounding the monument is sunk into the ground, indented into the earth, to be a reminder of the plane that crashed in Pennsylvania that day. The base is to portray the Pentagon, while the sculpture in the middle represents the Twin Towers.

The memorial was in planning since 2002, but after the JNF staff had found a location and even
commissioned the sculptor, they were faced with an environmental obstacle. This necessitated moving
the memorial 200 yards to accommodate the migration paths of gazelle. The original area slated to be
covered by the memorial was five acres, but the construction of the rapid railway from Jerusalem to Tel Aviv in the vicinity, may still effect the actual eventual size.

Two million dollars were donated by American philanthropists to build the site. The plaza surrounding
the bronze sculpture was donated by the Bonka Stavsky Rabin Trust. New York resident Ed Blank, whose wife died a few days before the attack, funded the sculpture. The JNF also contributed
substantial funding.

In 2003, the Israel Postal Authority (now the Israel Postal Company) commissioned artist Michael Gross to create a commemorative stamp for the horrendous events of Sept. 11, 2001. Another Israeli stamp of commemoration was designed and printed after the 9/11 Living Memorial in Jerusalem was opened.

Directions:
Coming from Ramot toward town, turn into the narrow road slightly before Highway 4. Take the right-hand fork and keep going and going and going (about 10-15 minutes by car) until you reach the monument.
Posted by Eretz Yisroel in the Lens at 2:58 PM

Labels: The 9/11 Living Memorial in Jerusalem