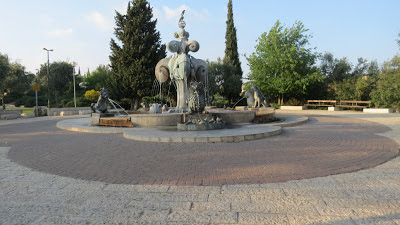 We find the Mizrakat HaArayot (Lion’s Fountain) several dozen meters south of Mishkenot She’ananim, at the junction of Rechov Melech David and Emek Refaim. The fountain stands in the designed by architect Ulik Plesner and built in 1964 with the generous contribution of Bernard Lewis Bloomfield of .

The Lion’s Fountain is a gift from the former German Chancellor Helmut Kohl (of the -), and was created by German artist Gernot Rumpf. It’s a perfect illustration of the passage where Yaakov Avinu pleads: “Rescue me, please, from the hand of my brother, from the hand of Esau…” (Bereishis 32: 12). The giving of this fountain was one of those “friendly” overtures of the nations acting towards us as “a brother.”

After annihilating over six million Jews, friendly presents us with this large fountain that represents spiritual obliteration of Am Yisrael. Combining vegetation, water, and animals to give a sense of Gan Eden, the message of this art work is that the three major religions need to merge to enable an ideal world. The place of the fountain was chosen deliberately to connect the Old and and to create a meeting place to “mix” the Arab and Jewish populations of . It is intended to symbolize peaceful coexistence (merged-existence) between the many diverse populations of .

Much of the city of is in the tribal portion of Yehudah. It could therefore well be that this is why the lion was chosen as the city's official emblem and the city is full of them. The fountain features twenty mythological bronze lions. Before creating the lions for the sculpture, the artist spent time at the Biblical Jerusalem Zoo observing the lions’ movements. 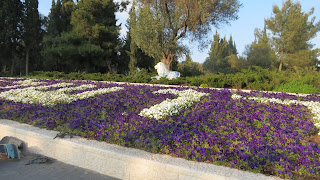 Not far from the Lion’s Fountain in the ’s “Dutch Corner,” (a gift from the people of ) a lion with a blue and white tile body rules over a flowerbed that spells “Yerushalayim ” in colorful seasonal blooms.

The also features the famous landmark, the Montefiore Windmill. The windmill was built to generate livelihood for residents of Mishkenot She’ananim, ’s first Jewish neighborhood built beyond the walls of the by Sir Moses Montefiore, with funding of Judah Touro in 1857. 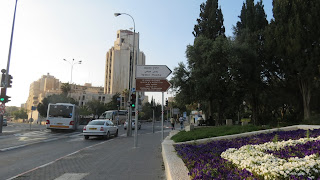 Sir Moshe wanted the residents of this colony to be self-sufficient and achieve economic independence. A British expert from a firm of millwrights in — with all the necessary equipment and instructions to build a windmill — was sent to the . The windmill was meant not only to provide a livelihood for many by providing work, but also to reduce the price of flour for the whole yishuv. (Until this point, the grinding of wheat had been an Arab monopoly, which caused the price of flour to be high).

Unfortunately, wind conditions in were not suited to power the windmill, and also the machinery was designed for European wheat, which was much softer than the hard local Israeli product. The mill was used for a while but then it broke down, and due to the invention of steam-powered mills, the Montefiore windmill was outdated by 1891. 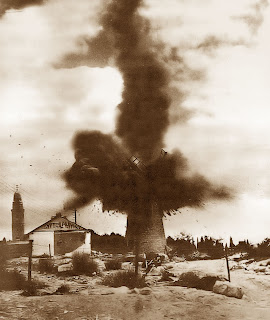 Anecdotes about the windmill abound, here is just a sample.
Firstly, the local Arab millers sent their kadie to put an evil eye on the windmill. He cursed it that it should be washed away in the first rain. When it survived the rainy season in tact, the Arabs claimed the mill was the work of the devil himself.

A second tale told goes as follows. The Arabs developed a taste for the lubricating oil on the wings of the mill. They would come in hordes to lick them. It was feared the mill would burn down from the resulting friction caused by the lack of oil. A leg of pork was placed in the oil barrel, causing the Ishmaelites to lose their taste for the oil.

And now for a third story. When the British ruled , they blew off the top of the windmill in an operation dubbed "Operation Don Quixote." Some of their soldiers had been sent to raise the mill to the ground. But when they saw a placard proclaiming a British Lord had built it, being the proper stiff upper-lipped Englishmen they didn’t want to insult the nobility of their motherland, and it sufficed for them to  take off the kippah.